Oh shit, y’all!  I’m changing the game!  It’s a big-budget Christmas movie, instead of a made-for-TV Hallmark abortion that was shot in the director’s Mom’s house in Vancouver!!  And it’s only baaaaaarely a Christmas movie.  So why am I doing it then?  Because TALKING DOGS, FUCKERS!! 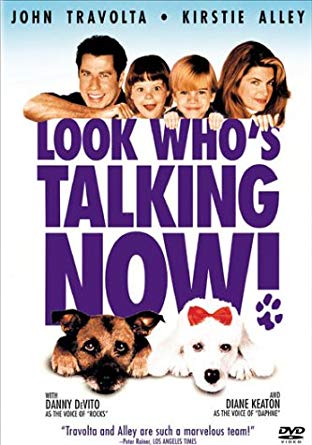 In a shocking departure from the first two movies, no one on the poster is wearing sunglasses. (The sunglasses budget was slashed to make room for Travolta’s hair plugs)

“Look Who’s Talking Now!” is the third installation in the illustrious franchise that first brought us one talking baby, and then doubled down and made it two.  As with all great stories, the auteurs of the LWT series knew they had to adapt or die.  So now the dogs talk, and there’s nothing you can do about it.

Molly (Kirstie Alley) and James (John Travolta) are living in marital bliss with their son Mikey and daughter Julie in Queens.  Their kids are loud and demanding!  Down on the streets, a stray dog is trying to pressure a fancy lady-dog into letting him put it in her.  He literally says “I take you to the best dumpster in town, and all I get is a lick on the cheek?”  What a dog this literal dog is.  Lady-dog relents, they bone, and so you know what that means – queue the wholly unnecessary yet omnipresent fertilization scene that is the weird trademark of each of these movies!!!!

Thank you, Look Who’s Talkings, for showing young girls everywhere that their insides are a majestic mess of Spaghetti-Os and white eyeless tadpoles screaming jokes at each other against a backdrop of wet tissues.

The ruined lady-dog gives birth to a litter of puppies.  And what a coincidence, because across town Mikey – the incorrigible bastard son of Molly and some schmuck from movie #1 – is really hounding (lol!!) his Mom for a dog.  She tells him now’s not the right time, and NOTHING WILL CHANGE THAT, OK?

James is begrudgingly applying for a corporate flying job, and the fact that he has to wear a tie instead of a Hooters bib to the interview is really chapping his down-to-Earth regular-Joe ass.  But like – you have a family to support, ya dingus.  Get a dang job.  He interviews with BOSS LADY and LITERAL ICE QUEEN Samantha, who has her tits out at the job interview, as you do.  James charms her by being borderline-simple and gets the job, which is cool because Molly has just gotten SACKED.  (That means fired in Britain – get some culture, jerks!)

Depressed Molly now has to spend all her time with the kids, and kids are gross. 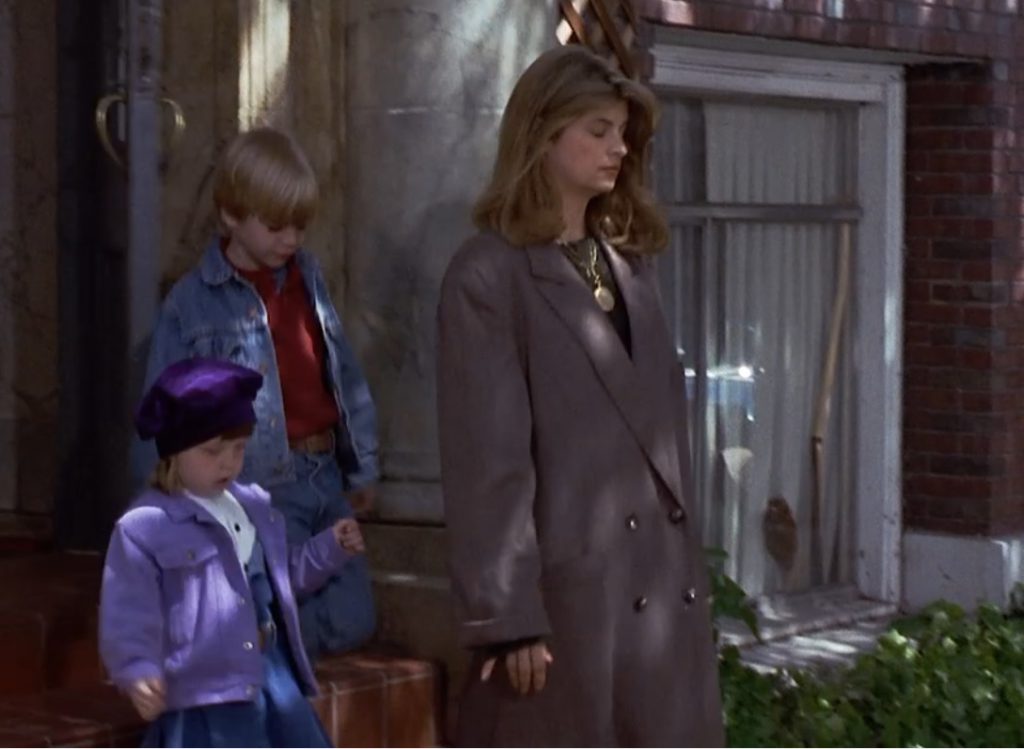 If that’s not the face of a woman wondering how high she needs to fill the bathtub in order to drown herself, then I don’t know from faces.

As they leave their apartment building, Mikey sees a box of puppies for sale and gets a twinkle in his eye.  Does he want to torture these dogs?  Maybe!  Instead, all the puppies get adopted save one, and that puppy escapes to begin a life on the street with a homeless guy.

Molly gets a new job working as an elf supporting a Mall Santa.  She instantly abuses her power and lets her kids cut all the other mouth-breathers in line to get on the old man’s lap.  Mikey asks Santa for a dog, and Julie asks him for a new face.  Santa says no.

“But, please help! This isn’t a hat, my skull just grows this waaaaay!!”

Mikey creeps backstage, witnesses Santa taking his costume off and has a full on mental breakdown.  But he belongs to a family that doesn’t know the meaning of the word shame, and his parents and sister do a creepy lip synch/interpretive dance to the Chipmunks Christmas song to try and cheer him up.

“You want us to kill your sister? Will that make you happy? We can bash her head real quick – snuff her out like a cigarette!”

Molly and James are so worried about their moody little bitch-son, when really they should be concerned for Julie.  We see her staring at a basketball game on TV, and now we’re inside her mind!  (It is ga-ross in here)  Julie is fantasizing about playing one-on-one with Charles Barkley, a grown man  and her very real obsession.

“Flying toddlers! The gypsy was right!!”

She beats him, of course – and becomes his child bride.

2 months have passed since the movie started, so the puppy from the beginning is now a 7 year old streetwise adult dog. He gets snatched by the dogcatcher and taken to the pound to be put down, at the exact moment that James takes Mikey to the pound to try and buy his love back with a dog.  WHAT A HAPPY COINCIDENCE!  Mikey names the dog Rocks, because he’s shitting everywhere and this kid is a real asshole. 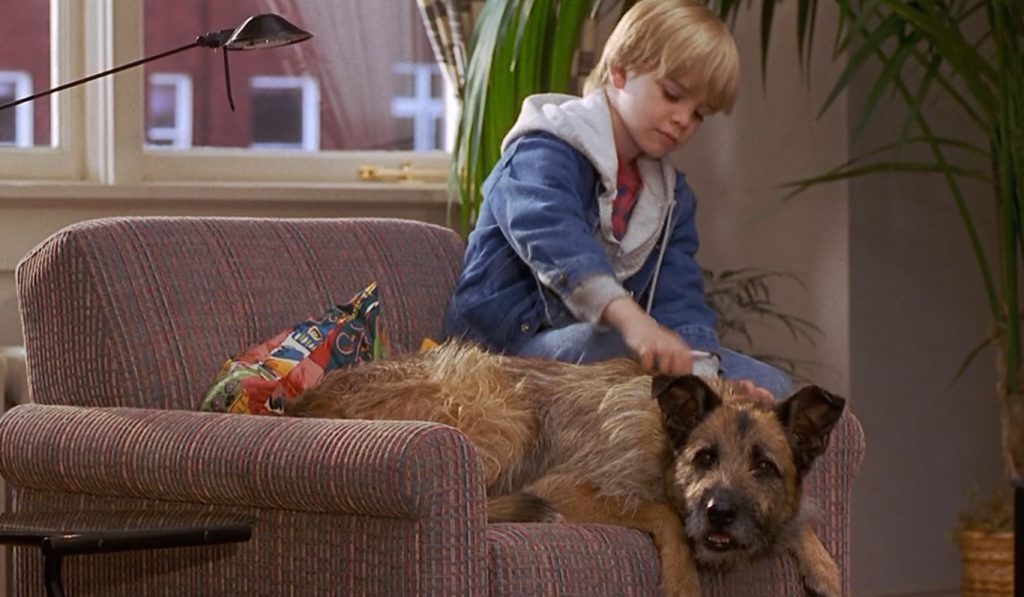 “Then after you shit in my teacher’s shoes, you’ll help me kill the President!”

They bring Rocks home and find that Samantha has surprised the family with another dog!  A purebred and obedience-trained poodle named Daphne.  Samantha has tired of her, and so wants this family of poors to take care of her.  What what what – now they have TWO DOGS!!!!!!

A line has been drawn – Mikey likes dirty, homeless Rocks; and Julie keeps grabbing at snooty, kind of ugly Daphne.  Daphne acts like she’s too good for the family, and Rocks acts like he’s from Staten Island.  YA BURNT, STATEN ISLAND.

James keeps flying off to take the thirsty Samantha all around the world, leaving Molly alone to take care of the two wretched animals, *and* the dogs.  As if she doesn’t have enough going on, Julie has a mental break and decides to end it by leaping off the top of the bookshelf in the living room.

“Help me fill this with pee and then we’ll go throw it in Samantha’s eyes.”

Back at the apartment, things between the kid-dog armies have come to a head, and Rocks ends up destroying Daphne’s castle doghouse. So Daphne decides to pull a frame job and chews up one of Molly’s favorite shoes so she’ll kick Rocks out when she finds it. 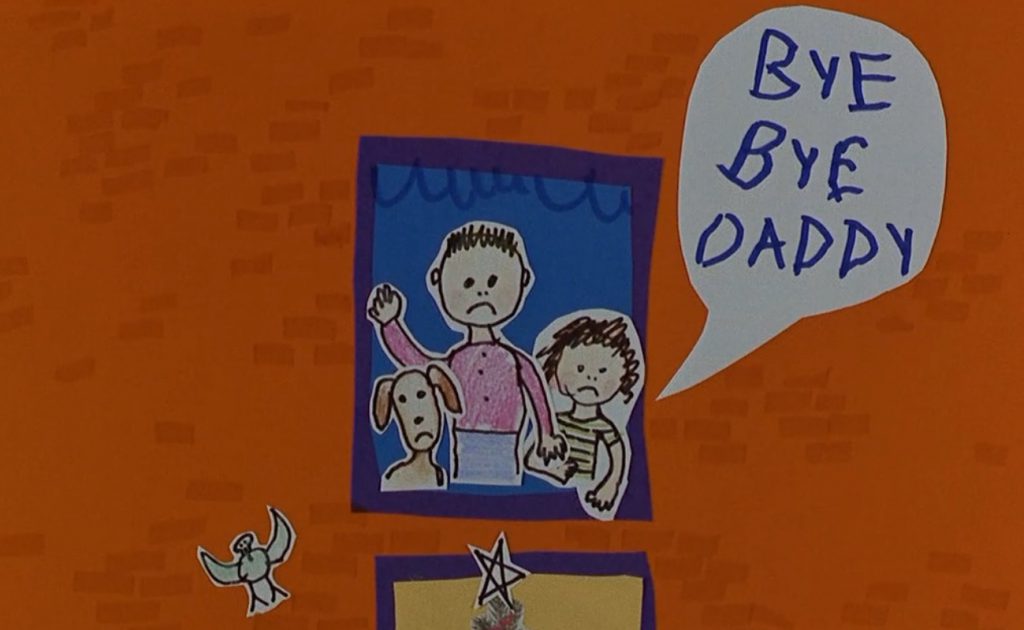 I feel like this posterboard will be the last thing James sees before he dies.

James is off again, missing all the fun at home so Samantha can drop things on her private jet and make him bend over to pick them up because she’s an ogling horndog.  We’re not even safe in the skies, people!

Miles apart, James and Molly have dueling nightmares about the other one cheating.

But then they like, meet up in their dreams?  It’s like Inception, but with more drama and waaaaaay better special effects. 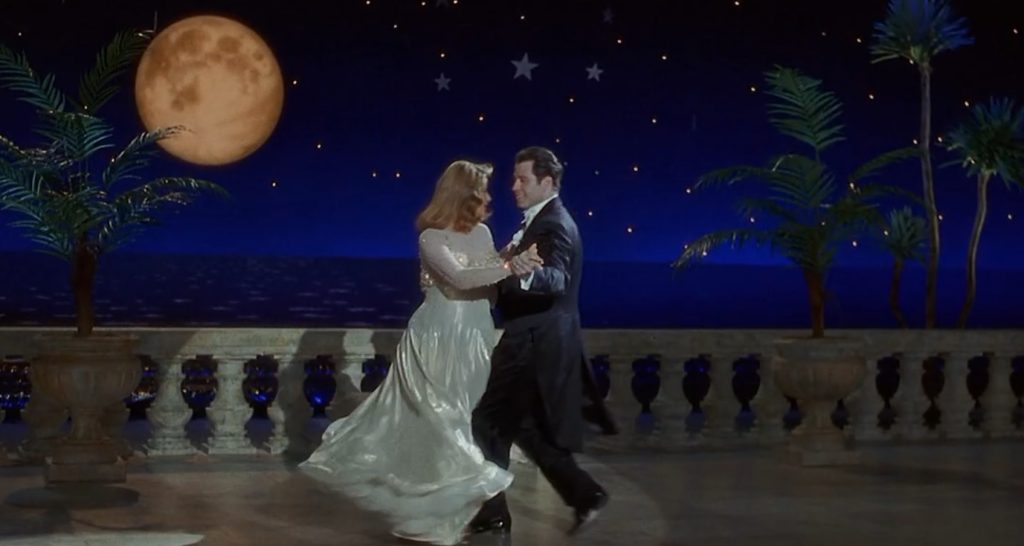 I know what you’re thinking, and yes – “La La Land” *did* steal their entire movie from this one dream sequence.

As Molly humps her boyfriend pillow in her sleep, Rocks lets Daphne out to pee and they make a night of it!!!!  They eat garbage, play in the mud and totally fall in love. 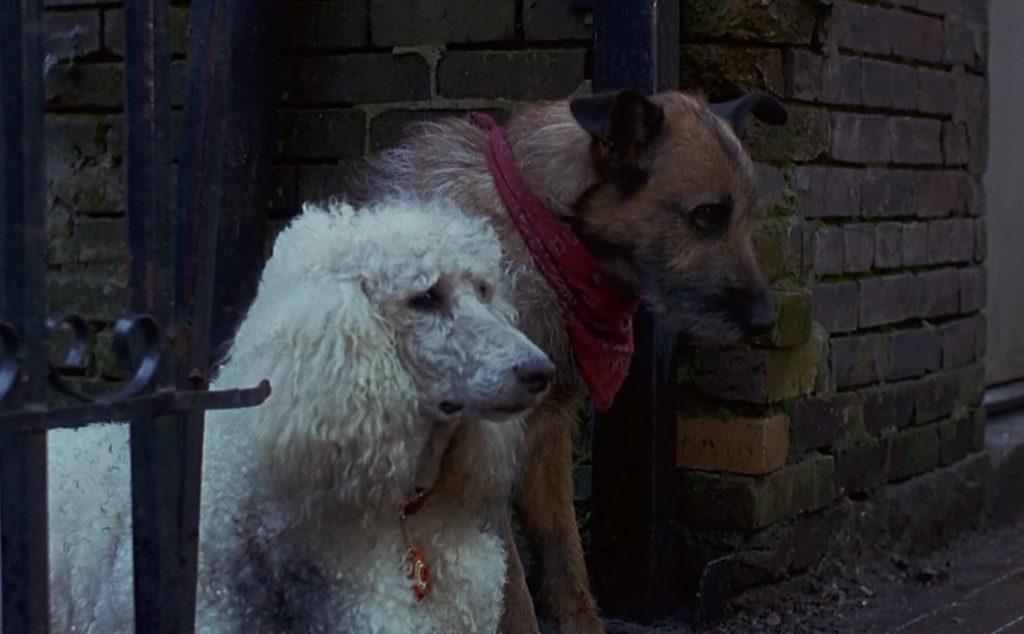 I assume they also boned, because look at these “morning after regret” faces.

When they get back to the apartment, Molly has finally found the shoe that Daphne ate up, and decides ROCKS MUST BE DESTROYED.  But like, after the holidays.

It’s Christmas Eve, and James is leaving work to head home and fuck his wife but of course Samantha has other plans.  She tells him she needs him to fly her upstate to a sexy cabin so she can save some fake jobs in a fake merger.  He agrees because he is dickless, and calls Molly to cancel Christmas. 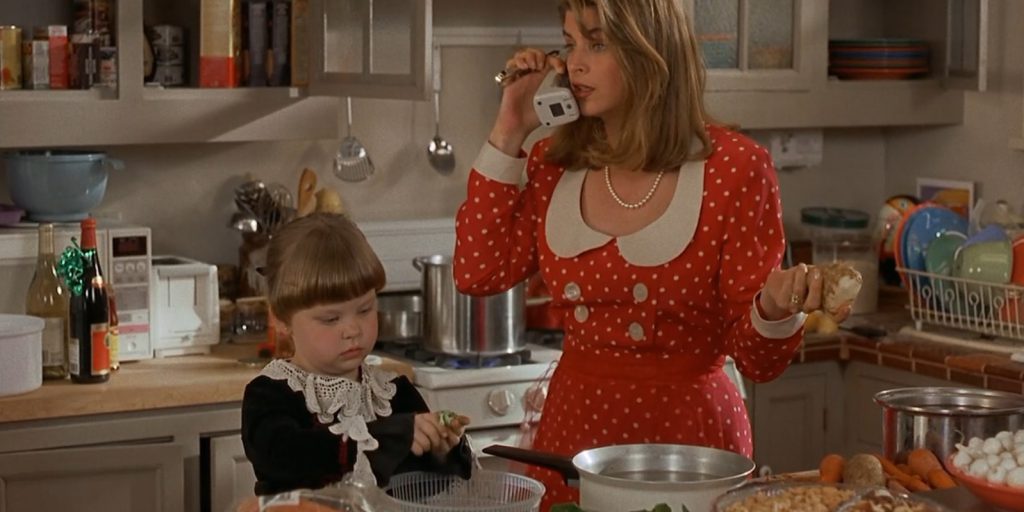 “You can’t keep leaving me alone here – your daughter is putting pieces of dead pigeon in the potatoes AS WE SPEAK.”

To the surprise of no one except for Simple James, there is no meeting in the cabin upstate.  Just a roaring fire, some scotch, and Samantha’s soaking wet babymaker.  And now there’s a blizzard!  I guess he’ll just have to stay and have sex with her.

Molly makes some calls to check up on them, and finds out there’s no meeting,  She cries mascara into the pearl onions while her Mom offers some motherly advice.

The kids find out Daddy won’t be home for Christmas and begin melting down, so Molly decides that she is taking Christmas to James!!  So her children can see him plowing another woman for themselves?  OK!  Seems like more of an Easter thing to me, but – your kids, your decision!  She makes some more calls and finds out where James and Samantha are holed up, so they pack up the car and head North!

The blizzard gets the best of them and they crash in the woods.  Then a lisping wolf with an accent that feels vaguely racist shows up and moves in to attack Molly.  But Rocks jumps out of the car and to the rescue!   He chases the wolf away after a fight that rang a little too real, thankyouverymuch.  The dogs in this movie are the only ones I care about, so please be careful.  And actually, I don’t really care for Daphne.  Anyhoodles – Rocks and Daphne split up to go get help.  Rocks is off to find James who he can smell in the vicinity, and Daphne to find the police.

Meanwhile back at Cabin Intercourse, James is fucking slow-dancing with Samantha and still no alarm bells are going off for him. 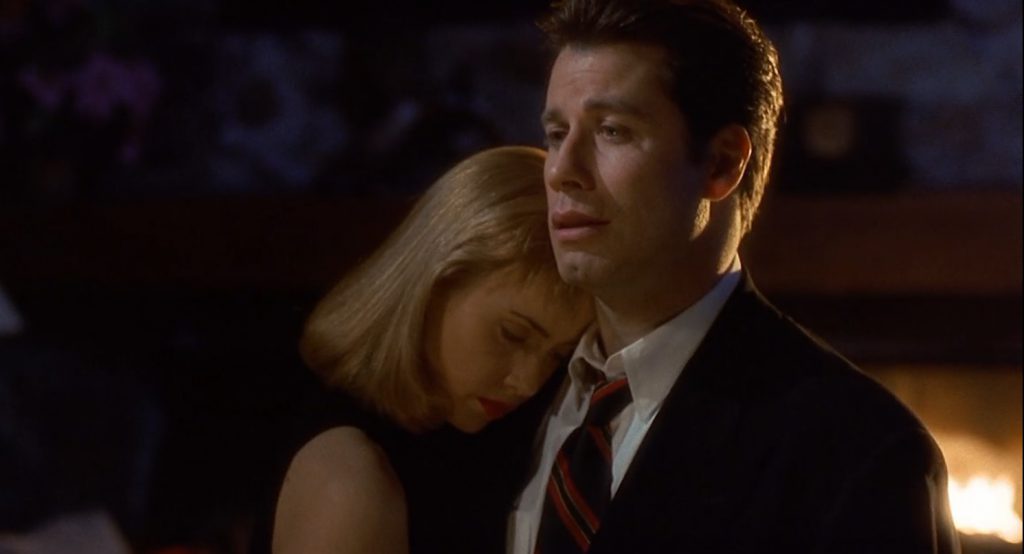 Until he sees that she unplugged the phone, and then he’s like, “WHY I OUGHTA-“, but before he can punch her, Rocks shows up at the cabin.  James finally tells Samantha, “Bye!” while she screeches that he’s fired, Rocks pisses on her for good measure – and then they’re off into the wilderness to meet the family back at the car.

But Daphne is a competent dog all of a sudden, and she already brought help to come rescue Molly and the kids and take them to a Rangers Station.  Disturbingly, once they arrive at said station, the Ranger tells them they can NOT go back out in the snow to look for James and Rocks, so they may as well get comfortable.  Then he takes his coat off and tells the kids there’s some eggnog in the kitchen.  Is he – is he going to rape all of them?

James and Rocks are trying to make their way to the Ranger station themselves when the wolf from before shows up with some backup and they attack!!

A snowy figure in red shows up at the Ranger Station and Mikey is like, “I believe in Santa again!!!” but no, it’s just James.  He and Rocks escaped the racist wolf pack because his beeper went off, which is something the director of this movie definitely fact checked.  The family is reunited!!!  And it’s still Christmas!!  Rocks and Daphne immediately start trying to fuck. 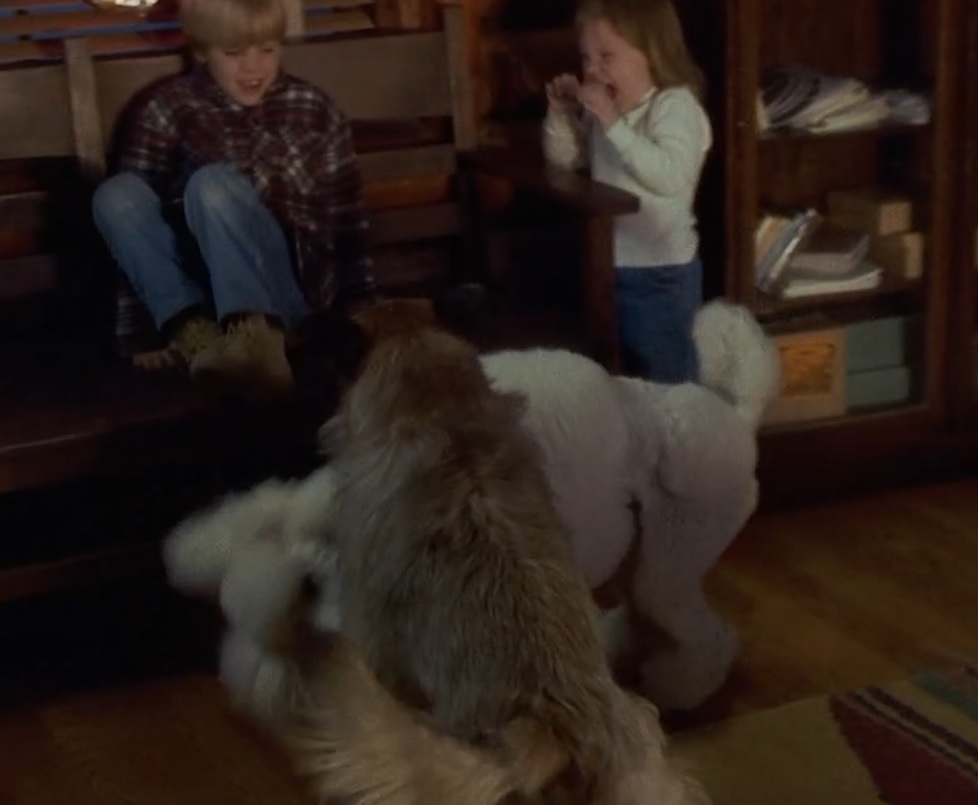 The dogs are moaning “Oh baby” “Oh yeah” and the children are screaming and really – isn’t this what Christmas is all about?

Molly immediately takes James at his word that nothing happened with Samantha, and so everything is perfect again!!  Except that the creepy Ranger is still there.

“Hey guys – I think I’m picking up a transmission from Santa! He says…’Everyone take your clothes off, right the fuck now’.”

The End!  T’was a harmless romp made tolerable by the undeniable chemistry between humanoids Kirstie Alley and John Travolta.  And who or what can they thank for blessing them with their mega-watt star power?  Oh, I think you know.

“I also have a huge dong, just letting the ladies know.”