When everyone on the planet heard that Lindsay Lohan was going to be playing Elizabeth Taylor, we all laughed.  And then we got sad, mad, nauseated, laughed some more, and promptly forgot the movie was being made.  UNTIL NOW.  Or until 5 days ago, when it premiered.  I was in Florida for Thanksgiving, hence my just suffering through it now.  Will it be as bad as you all said it was?  Let’s find out!!!

Alright, so right out the gate this movie tells us it’s “Based on a true story”.  I dunno – when in Elizabeth Taylor’s life did she acquire 487,000 freckles and a voice reserved solely for female parolees who smoked their prison sentences away?  Was it later in life?  Show your work, Lifetime.

The movie opens with a narration by our Richard Burton, who proceeds to describe Liz as “luscious” – and makes me gag involuntarily and add extra whiskey to my glass. 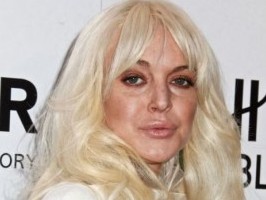 “Luscious” is the first word that comes to mind for sure. If anything, she looks TOO MUCH like Elizabeth Taylor.

The movie opens with Liz and Dick both dressed like weird cat burglars all in black, sitting in directors chairs and breaking the fourth wall.  “Richard should have been a writer!!”  “We were destined to meet!!”  Is this how the whole movie is going to be?  Are they just going to loudly yell the events of their lives at me?  Nope!  I guess they’ll just be creepily setting up scenes.  Good!

So we see them meeting on the set of “Cleopatra” in 1961.  Dick is immediately taken with this cold bitch, and starts stalking her.  Romance was SO ROMANTIC back in the old days.  Holy hell – less than 10 minutes in and every time Lohan speaks I cry a single tear of blood. 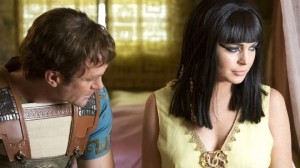 So after a couple scenes of them “hating” each other, they make out on set and BOOM.  Love.  It’s just that easy.  But I can’t focus on anything except how bruised-up Lohan’s legs look.  Gurrrl, you are not even 30.

Ha!  Now there is a hilarious sequence of Liz and Dick boning all over the set, and production assistants having to steer their respective spouses away from their trailers.  It’s even set to jaunty 50s-era-sitcom music.  This infidelity is so WACKY!!!

So without ending their marriages they start their new lives together.  This was the 60s, so there was an exorbitant amount of drinking and smoking happening the whole time, which must have made it easy for the “Liz & Dick” production team.  They just gave Lindsay a time period-appropriate dress and told her it was a Tuesday morning.  Voila!  Authentic Liz Taylor binge drinking!  Seriously though – they screw in pools, over eggs, while he reads her some weird slam poetry he wrote that is terrible – they are setting up a foundation for a romance that will last forever!! 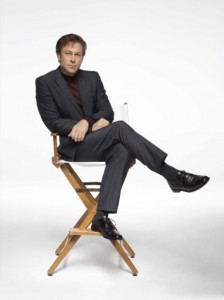 So they wrap on “Cleopatra” after 14 years of filming.  Did anyone ever see that movie?  Does it actually look like a low-budget porn set, or is that Lifetime taking creative license?  Dick decides to try and make it work with his over-dramatic suicidal wife, which makes Liz super mad.  So she goes to Switzerland to yell at the mountains about how bored she is.  The mountains are like, “YOU AND ME BOTH AND ALSO SHHHHHHHHHHH.”  All of a sudden, Dick is also in Switzerland for no reason, and they start “hanging out just as friends”.  Friends who kiss on the mouth, like me and my sexy boyfriends.  Dick tells Liz he’s on a new movie, and she tells him that she is now too.  Guys loooove that, by the way.  When you ingratiate yourself into every aspect of their lives so they don’t have a moment without you.  It’s their very favorite thing, ask anyone.

So they’re boning again.  But they’re both still married.  The stress of this makes Liz put on fuzzy hats and drink vodka. 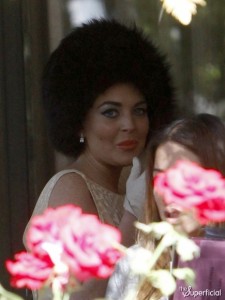 “It’s actually vodka AND bourbon! The Swiss call it ‘gelato’!”

Liz drinks all the booze and wears all the hats and Dick finally gets the divorce he’s been asking Santa for.  Yay!  They celebrate by moving to NYC.  Then they remember that Liz is still married – whoops!  But whatever, that’s taken care of in a 6 second scene of her signing papers and being a total c-word about it.  Then, MARRIAGE: 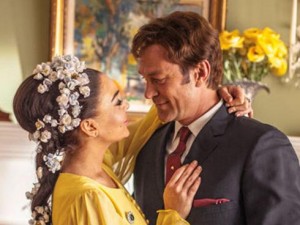 “C’mere, baby….I have so many regrets already…”

It’s a Canadian marriage – does it count?  I’m not counting it.

Dick is nominated for an Oscar, doesn’t win, the seeds of discontent are sown.  If I had a dollar for every one of my relationships that started to fray after I won an acting accolade and my boyfriend didn’t, I would have to stop and ask you what the word “accolade” means.  You and your fancy words!  Liz and Dick both get nominated for their next film, and Liz wins, and Dick doesn’t, and you can actually hear his penis getting smaller.  Coupled with their money problems, and Dick’s constant fat comments (He tells her she has “pudgy fingers”, she then punches him and ACTUALLY SAYS, “Feel my pudgy hands NOW!”), things aren’t as Taylor-riffic as they once were.  I apologize for that pun.  The whiskey – it’s hitting me.

Things are smoothed over when Dick buys Liz the world’s largest diamond to put on her fat fucking fingers.  Yay! Now they’ll be happy forever!  Do you think that ring was the inspiration for Liz’s WHITE DIAMONDS perfume?  Whenever I saw that commercial as a kid, I would laugh for a solid 5 minutes, without ever knowing why.  What is it?  Is it the music?  Taylor’s reaction when the mysterious old guy reaches for her earrings?  The fact that I was on SO MUCH LITHIUM as a child?

Anyhoo – have I mentioned that at this point they were living on a boat to escape taxes?  Because they were, because they were GENIUSES.  But their asshole kids want Christmas on land, where the spiteful and vicious Poseidon won’t fill their stockings with mermaid carcasses.  So they go back to Switzerland!  And it’s in Switzerland that Dick’s brother runs off in a snit after a fight with him and I dunno – falls down the stairs?  I can’t be sure, because it was a 30 second scene of blackness and noises.  He could have been attacked by Ewoks – I wouldn’t be able to prove he wasn’t.  What I DO know, is that he is now paralyzed.  Dick is so overcome with grief and guilt, that he returns the whole family to the boat.  So…you’re not gonna take care of your brother?  I mean, you gotta do you – just seems a little heartless.  Whatever – I’m sure you have important boat business to attend to.

That business consists of shutting down Liz’s boat dance parties, I guess.  Liz and Dick get in a huge fight.  There’s some rather stylish manhandling: 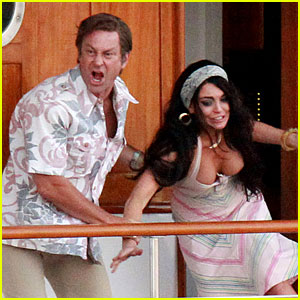 Seriously – I should hope to have outfits this cute when being subjected to domestic abuse!!

They’re fine, though.  They’re always fine!!  Dick throws Liz an extravagant 40th birthday party that’s instantly ruined when 2 skanks in the corner make one catty comment.  Pfffft – women be hatin’.  And then, to make matters WORSE, Dick’s brother dies.  Insensitive, selfish Ifor – dying when Dick and Liz are already dealing with their own stuff.  They both spiral out of control and fabricate relationships with other people in order to deal with their grief.  Which is normal and mature and up yours, you think you’re so great?

They got divorced.  Liz broke her leg?  You guys – things are running together really haphazardly.  Liz is dating some guy named Henry, broke her leg, and now has cancer.  What?  Oh wait – false positive!  Like any reviews for this movie, amirite?!?!?  *blows brains out*

Dick rushes to her side, and then they remarry.  And then they divorce again.  It was at this point that the director realized they had about 90 mins of footage of Liz and Dick drinking and standing around and furrowing their brows and doing a poor job of disguising their blood alcohol levels, and that they had to wrap this goddammer up.  So BOOM!  Dick is dead.  And Liz is in mourning: 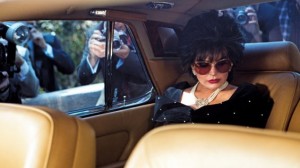 The movie then ends rather unceremoniously with cat burglar narrators Liz and Dick holding hands across their directors chairs.  Oh, so they were telling their story from BEYOND THE GRAVE?  This weird framing device leaves us to wonder if this whole thing was a terrible fever dream.  Was it?  Maybe?  PLEASE?  I won’t even be mad that I have Swine Flu that’s going to kill me, I don’t want to live in a world where Lindsay Lohan is hired to play Liz Taylor anyways.