Our leaden death march through the Christmas season continues, my fellow captives!  The next movie on the docket: “Matchmaker Santa”, starring none other than Miss Gretchen Weiners herself! 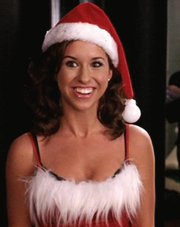 She was so ready for this role. Sitting around for years, dressed like Santa. Just…waiting….

This Hallmark Channel Original abortion opens on a Christmas evening in the home of some jerks.  Mom, Dad and 10-year-old daughter are all sampling the daughters homemade Christmas cookies.  They are SO GOOD.  There’s a secret ingredient, but this sneaky kid isn’t telling.  I’m distracted because Florence Henderson’s name just scrawled across the screen.  Dip!  Mrs. Brady’s in this?  Will she be Gretchen Weiners’ Mom?  Mrs. Claus?  A recalcitrant homeless woman surrounded by pigeons who befriends our protagonist and teaches her not to judge others?  Because that’s been done, but it could be done better. 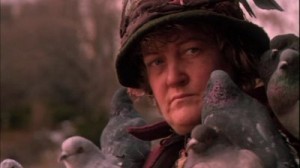 Don’t look at me like that. You’re the one that can’t sell crazy when covered in flying rats. Go back to the Groundlings!

So anyhoo – this family is perfect and super happy and so I hate them.  The little girl writes a letter to Santa and asks for a boyfriend for Christmas.  Um, YOU’RE 10 YEARS OLD.  Maybe you should ask Santa for a childhood, instead of waiting around for a MAN to complete you.  Does Jezebel know about this?  At least ask for a Lite Brite. 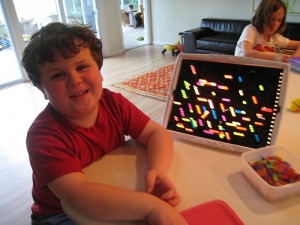 Look how happy this kid is, and he only ate 32 pieces! (He died that very night)

Fast forward to the present day, and the young baker with no sense of self is all grown up and her name is Melanie.  She owns her own bakery and is totally stressed with all the Christmas orders she has to fill.  Life used to be so much simpler, you guys!  We find out that Melanie won’t be seeing her family this Christmas, which is super depressing.  Even meth heads hunker down with other meth heads and share their meth on Jesus’ birthday.  But RELAX – because she is living her dream and she has a boyfriend.  His name is Justin, and in the very same breath that she mentions him she also explains that he’s really busy and important.  I hope he’s not too busy to appreciate her!  Do you think he is?  Let’s watch!

Oooof – it’s not looking good.  Justin has his friend Dean pick Melanie up for a date because of BUSINESS WORK, and you can already tell that this guy Dean is the one Melanie is supposed to be with because he opens the door for her and smiles a lot.  As they leave the bakery there is a super lecherous Santa outside ringing a bell for donations and giving Melanie and Dean sexy-time eyes.  I’m uncomfortable!  Dean takes Melanie to the restaurant, but Justin is STILL not there and the restaurant is way crowded.  And look!  There’s that creepy Santa again, but in street clothes.  Pay attention, you two! 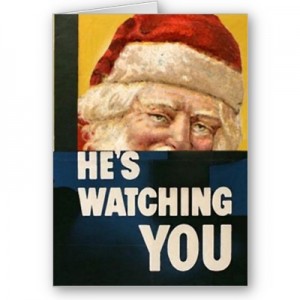 Justin finally shows up looking smarmy, and he invites Melanie to a family cabin for Christmas with his Mom.  Romantic!  He failed to mention, however, that this will also be a business Christmas celebration with the entire Board of Directors.  Oh man, she’s gonna be so mad when she finds out!  Especially considering a roving Board of Directors attacked and killed her grandparents one snowy night years ago in Minsk.  What?  I don’t know – there’s background bull about Justin’s relationship with his executive Mother, and I!  Am!  Bored!  So Justin and Dean head up to the cabin to ready it for the party/meeting, and Melanie flies up separately.

Guess who’s sitting next to her on the plane?  No one, the middle seat is empty.  But in the aisle seat?  Creeper Santa!  He introduces himself as “Chris”, and I barf.  The plane lands, and Justin can’t go pick Melanie up like he promised because he’s gotta meet with some business woman instead.  We’re all on the same page here, right?  Justin and business lady are gonna hook up and devastate Melanie, who will find comfort in Dean’s arms?  Good.  Dean agrees to pick Melanie up in exchange for the opportunity to decorate a real Christmas tree, making him the world’s worst negotiator.  On the drive from the airport to the cabin, they pick up Creepy Santa who is hitchhiking on the side of the road because this movie is ridiculous.

Justin meets with business lady WHO JUST HAPPENS TO BE an old high school flame of his.  The stage is set for drama, you guys!!  Also – who gives a shit if these two end up together, they are so boring: 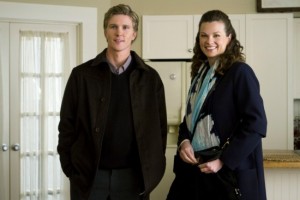 Meanwhile, creepy Santa touches his finger to his nose – and what I initially thought was a nod to his coke habit is actually some “Bewitched” shit, and their car breaks down in a perfect little Christmas town.  They’re stranded for the night!  They get a room at an inn run by Florence Henderson, who is dressed like a wacky Christmas gypsy: 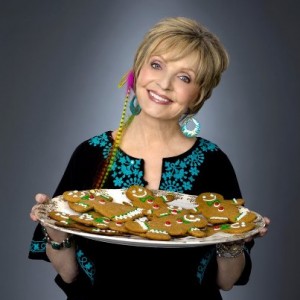 “These were once REAL men who did me wrong! Feast! FEAST!!!”*

She mistakes Dean and Melanie for a couple, and books them in the same room!!!!!!!!!!  You dumb bitch, Florence Henderson.  They told you at least twice, in unison, that they’re not a couple.  So obviously they share the room, share smoldering glances, and share contrived stories about their Christmas memories.  Melanie tells Dean she used to love baking cookies with her Mom at Christmas, and he says, “So that’s why you opened a bakery!”  And she says, “Oh, I guess it is.  I never really thought about it.”  And I’m immediately incensed.  You never THOUGHT about it?  What?  One of your parents had better have choked on one of your cookies and died, and you blocked out all memories of baking Christmas cookies to get over the pain.  That is the only way I’ll accept you completely blanking on these cherished memories.  DO YOU HEAR ME?!?!

Anyhooooo.  The next morning, Melanie and Dean are still stranded and creepy Santa is off being the town Santa.  Did they really bus him in for this?  No one else in town could put on the suit and the beard?  Roseanne Conner even did it once, for God’s sake.  Florence Henderson introduces Dean and Melanie to her elderly dog-in-heat friend Debbie who eye-fucks Dean, which I guess is supposed to make Melanie realize how desirable he is?  “If that old bag wants him to put a baby in her dead uterus, there must be more to him!”  Show your work, Florence Henderson.  Your logic is flawed.

Back at the business cabin, Justin’s Mom has arrived and we see that business lady stayed the night.  Nothing happened – YET.  Everything at the cabin is boring me.  They decorate, Justin’s Mom thinks business lady is his girlfriend, WHO CARES.  Back to Christmastown! 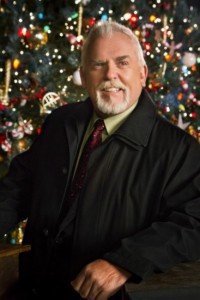 This mustache/beard combo brought to you by just straight OWNING SHIT ALL DAY LONG.

Well, Mr. Clavin is NOT trying to fix their car.  And oh no!  Christmas emergency!  Creepy Santa needs Melanie and Dean’s help, so he dresses them like elves, and they look like total assholes, and they help him hear the wishes of all the children in town.  More smoldering glances pass between the two of them as they work – so smoldering that half the little girls that came to see Santa are now pregnant.  Irresponsible!

Florence Henderson and her horndog friend are baking cookies to sell to raise money to buy presents for the poor and now-pregnant children in town.  But they have so many cookies to bake and not enough time – who will help them???  Duh, Melanie will.  Melanie will help them.  She’s a baker.  And creepy Santa gave her the gift of pure vanilla extract, which was the secret ingredient in her deadly Christmas cookies from when she was a child.  She can poison the whole town!!  Dean helps bake.  Everyone is having a GREAT time. 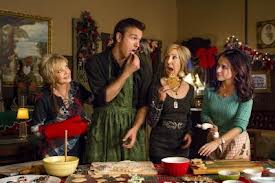 “See?  Everyone put the cyanide pill under their tongue like so, and then we’ll all be together again in Oz!!”

So they bake all day and yet only have about 130 cookies to show for it.  What disappointments – cancel Christmas!

By the way – at the business cabin, there was this whole side story about how the reason Justin couldn’t get to the town to pick Melanie up was because there was a bear walking around by his car.  I am TERRIFIED of bears, but I was rooting for this one. 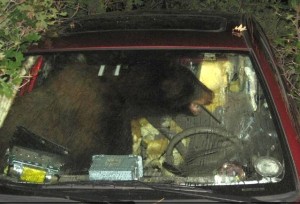 “Your storyline is weak, and so are you! I’m keeping the chapstick I found in here!”

At Christmas Town, the annual tree lighting occurs and Melanie is overwhelmed by the spirit of terrible off-key singing.  She starts to realize that Dean may be the one for her and they finally kiss.

Back at the cabin, Justin finally gives up and bones the business lady, not that anyone cares.  They drive into town the next day and there is a weirdly jolly confession between the 4 of them.  “We’re all sleeping with other people, yaaaaaaay!”  No hurt feelings, everything’s cool, see you at the Yankee Swap!  Also, there is no mention of how the Board of Directors party never happened – in the world of Hallmark and Lifetime holiday movies, business dealings are just a means to ROMANCE.

And finally, at midnight on Christmas Eve, creepy Santa disappears into thin air – like some sort of banshee. But not before this very perfect moment is captured on film: 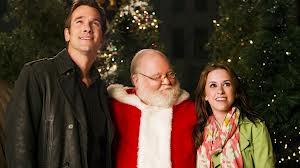 The true meaning of Christmas is titties, I guess.