Christmastime sure seems to last forever, huh?  Here we go!

The next movie on the list is a Hallmark channel special called “It’s Christmas, Carol!”.  Do you get it?  I want to make sure you get it.  OK!  In the interest of full disclosure (I’m nothing if not an honest journalist – obviously), I want you to know that I’m going into this movie drunk.  The other movies, I got drunk while watching them.  This one?  I’m going in sauced.  Because I am a grown-up and sometimes we get drunk on weeknights, that’s why.

So once more, INTO THE ABYSS!!!

This punny goddammer starts on a frigid December morning in NYC.  HEY, I LIVE THERE!!!  I’m assuming Carol is going to be in the typewriter business, because all the credits are being displayed in super annoying cutesy type across the screen.  Oooof – there’s Carol!  She is walking down the mean streets of NYC in a fur coat and she is not trying to share the sidewalk.  What a bitch!  I sure hope someone shows her the spirit of the season!  Or hits her with a falafel truck – I don’t rightly care.  Also – who is this chick?  Should I know her? 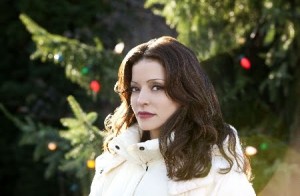 This isn’t even a still from the movie, she just stands in front of trees STRAIGHT HATING all the time.

Because I don’t, and I don’t WANT to.  She stops in front of a Santa ringing a bell for charity and makes a point of not donating, while saying “Are you KIDDING me?”.  Ugh – shoot her in the face.

Anyhoo – she gets to work, and it turns out she’s a book publisher and a totally mean one.  She’s a cross between Miranda from “The Devil Wears Prada” and whoever Sandra Bullock was trying to be in that movie with Ryan Reynolds.  You know the one – she played a heartless publisher from CANADA – the greatest threat to American security. 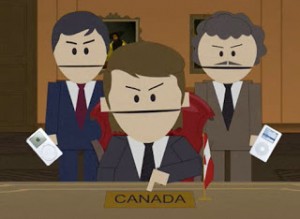 She was one of these jerks, I think. No – YOU look it up.

So Carol is the worst, and we know this because she has denied everyone’s request to take Christmas off to spend it with their families.  LOLOLOLOL.  No.  No, Sir.  That does not happen nowadays – EVERYONE gets Christmas off.  It was different back in old-timey London, where the original “A Christmas Carol” took place.  Back then, if you closed your business on Christmas day, the Loch Ness Monster would swim down from Scotland and take over, and come New Years you’d be back on the streets giving soot-covered-fingerless-gloved hand jobs.  Just ask this guy: 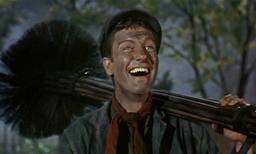 Anyways, everyone at work hates her, probably because she’s wearing a coat made out of every adorable pet you ever loved.  She has a long-suffering assistant named Kendra who’s basically the Bob Cratchett.  There’s also one of the “Queer Eye For The Straight Guy” dudes in here.  He’s gesticulating a lot while wearing vests.  He’s a caricature!

Carol even hates her own Mom.  Oooooh!  She’s the worst, you guys.

So!  She puts on a bomb-ass blue dress (You were right, Jessica!), and goes out to the mandatory company Christmas Eve party and just really shits all over everyone’s good time.  She runs into her old flame Ben who has a terrible haircut, and is writing a book or whatever, and it’s totally intense.  There are unresolved feelings!!  Everyone gets drunk except Carol, which is nutbars.  Company Christmas parties are the BEST places to get drunk!  Free booze, and the opportunity to embarrass yourself at every turn!  You duuuuumb, Carol.  She runs into the bathroom to continue being a bitch, and out of one of the stalls comes her dead former partner Eve, played by Carrie Fisher.  Holy ball sacs – do you think this is the most illustrious entrance of her career?!?!  Also – she is dressed like a Long Island fortune teller:

“Guess how many abortions I had when I was alive……WRONG!!!”

Eve takes Carol back to 1985.  Time for some  Christmas life lessons, y’all!  Eve doesn’t really tell Carol why she needs to be taught these glittery lessons, so let’s just assume it’s because the Mayan Apocalypse is drawing near, and no one wants to die an unrepentant asshole.  Which reminds me……..I’m going to hell.

In 1985, Carol steps into the department store her Mom used to work at to support her ungrateful ass.  Eve kind of rubs her face in the fact that her Mom had to work lots of jobs, which is a total dick move.  I bet if we looked into your ghost past, there’d be lots of ghost things you were ghost embarrassed about, so maybe chillax.  Also – this is Christmas past – is Princess Leia gonna be the one walking us through all of Carol’s Christmases?  With that scarf on the whole time?  Booooooooooo.

Next, Carol finds herself in a bookstore in 2000.  She used to love books, before becoming dead inside!  Carol argues with Eve about how publishing is about money money mooooooooney!!  And we find out that Eve was a good publisher who believed in authors and books, so I assume that’s why she had to die.  Oh!  This is also the first day Carol met that guy Ben with the turrible hair: 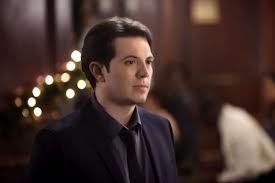 This “American Psycho” is one business card feud away from KILLING US ALL.

Now they jump to Carol’s first apartment with dumb Ben, and she bought him a typewriter and blah blah blah.  I am just now realizing that Carol’s eyebrows are weird slashes of angry color on her super pale face. 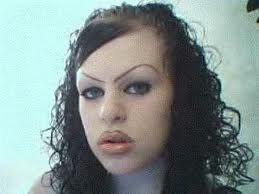 OK, they’re not THIS bad, but they’re pretty bad. I just swore I’d find a reason to put a set of chola eyebrows in this review, or I’d DIE TRYING.  I almost died – do you guys even care??

We see that Carol took over the reins at the publishing house and made it PROFITABLE (what a monster!), and that she told her Foppish Dandy of a boyfriend that she wished he was more ambitious.  Eve tells her she has a hockey puck for a heart, and I get sad thinking about how hockey is canceled until the new year at the earliest.  And then I get mad!  And I kick things around my apartment and swear at Gary Bettman for a while because it makes me feel better.  I am experiencing all the emotions, everyone.

Back in the movie, all of Carol’s beleaguered employees are still drinking and plotting a coup. 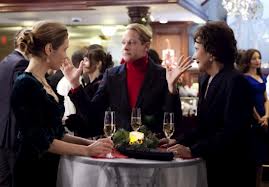 “If you guys were serious about this, you’d be in TURTLENECKS.”

While this brain trust is getting drunk on free champagne (ROOKIE MISTAKE – go for the top shelf booze, dummies), we go back to Carol who has finally realized she is getting the “Christmas Carol” treatment.  Nothing gets past this one!  Eve explains that the original story was embellished by Dickens, and I’m sure there’s some winking reference there, but all I can focus on is Carrie Fisher’s gravelly voice, and now I’m looking up pictures of her coke finger from the 70s: 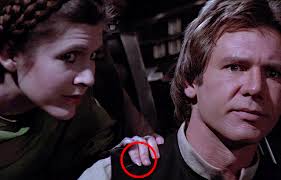 “Yeah! I sniff Star Crystals off this bitch!” (Editor’s Note: Is that a Star Trooper reference? I have had ALL the beer.)

We’re in the present now, and Eve is forcing Carol to look in on one of her employees’ houses on Christmas Eve.  This employee?  Poor.  Think about THAT when you’re enjoying your caviar baths, Carol!  And now Eve is taking her to the Christmas Eve party where all the employees are planning to defect and start their own company.  I’m reminded of the time I was working a terrible waitressing job on the East River, and my friend Kat led a coup/defection on July 4th because we hadn’t been paid in weeks.  She literally put her fist in the air, and said “This is OUR Independence Day!!!!” and led a waiter walkout.  It was glorious.

So!  Now Eve and Carol are in Kendra’s (Bob Cratchett’s) apartment watching her spoon with her boyfriend which is creepy as fuck.  Being weird voyeurs gives Carol an emotional hard-on, and so they fly to her Mom’s house.  They hang out in her high school bedroom, which is weirdly devoid of Third Eye Blind posters and tear-stained stuffed unicorns to be really legitimate, if you ask anyone who is a serious cinematographer.  Carol realizes that she’s being a bitch to her Mom and needs to stop doing that.  LESSONS!  Then they fly to Ben’s place and hear that he doesn’t love her anymore because she’s a total See You Next Tuesday now.  She is upset – but he has a point: SHE SUCKS. 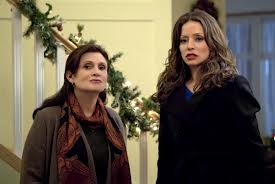 “He also said you always cheated at Scattergories, so he hopes you die in a fire.”

Christmas Future time!!  Eve takes her to a future Christmas morning where elderly Carol and Ben are surrounded by their kids and grandkids, having a wonderful time.  And I call bullshit – because isn’t the future in these stories always supposed to be something terrible that scares the protagonist into straightening up and flying right?  But then I realize that Eve is showing Carol a future with marriage and a bunch of kids, and I’m like – “I GET IT, MARRIAGE IS DEATH, LOLOLOLOLOL” #rimshot #cuttingedge #womenbeshoppin

But then we find out that this bucolic future is only ONE possibility for poor terrible Carol.  The next possible future?  BOOM!  Coffin time!  They see that Carol is dead and that only Kendra showed up to pay her respects.  But oh no!  Kendra’s the new Carol now!  All on her phone and firing people while at the graveside and shit.  People seem to be affected in pretty minimal ways by how Carol lived her life.  So I guess the moral of this story is – fucking, whatever.  Some people are just dicks.

Now we’re back in the present, and Carol wakes up at home on Christmas morning.  She calls information to find out what day it is, which is just the fucking dumbest thing ever.  I know this story – she’s supposed to lean out her window and scream at some poor passing kid.  And this being NYC, maybe we’d get lucky and she’d get shot.  Anywaaaaaays – she’s ready to make things right!  She starts by going to the poor employee’s house we saw before – turns out Carol fired her!  I must have missed that.  Anyways – Carol re-hires her, and everything is cool at this house.  Onto the next!

Next stop – the OFFICE.  This is the Mt. Doom of Carol’s bitchery.  (I’m going to see “The Hobbit” on Thursday night – does it show?)  Carol has set up a really nice dinner for everyone, and makes every employee a board member, though I don’t think she has the power to do that, and so I’m gonna call the SEC.  Yay!!  Carol fires Kendra because she wants her to be a writer, but I’m wondering if it’s REALLY because she’s Asian.  Carol seems SUPER RACIST.  I think she was a producer of the “Red Dawn” reboot. 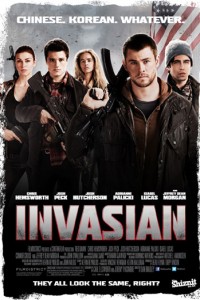 Carol! That is super inappropriate.

Carol goes to her Mom’s place and hangs up some stockings, so all is forgiven there.  Wait til her Mom opens those stockings and finds vials of bird flu.

Now to make things right with Ben!  Blah Blah, his typewriter, blah blah, everyone’s wearing scarves.  They reconnect, and I’m less emotionally invested than when Mouse and his Son had an experience with the infinity dog food label: 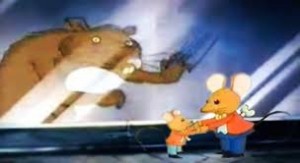 Jesus, this reference is so obscure, I’m about to pants myself. I’m a NEEEEEEERD!!!

But she gets her man, her employees get profit-sharing, and her Mom feels loved again.  Christmas!!  But what of Eve, the helpful ghost?  It’s not really explained, so let’s assume she returned to whatever frightful purgatory burped her up for this treacly exercise in redemption.  And let’s call that place Utica, because Utica seems AWFUL.