Wow, the holiday season sure is getting away from me fast.  I had planned on doing a lot more turrible Christmas movie reviews, but you know how December can be.  *glug glug*  *dials number*  *cries about having changed and deserving a second chance*  *puts “Fade Into You” on repeat until New Years*

But!  I wanted to get at least one more done.  And if my sister and I sit around to share a crap-fest or two while I’m back home in Buffalo, there may be more terrible to come!  But for now: “The Merry In-Laws”!!!!!

Hey!  Remember “Matchmaker Santa”, and how it gave us the joy of Cliff Claven away from his bar stool?  Remember how happy it made you?  But how you couldn’t help but wonder, “When will someone put Norm Peterson in a cheesy Christmas movie?”.  Remember how all of that happened?  Well fall to your knees and thank your weird cat god, because guess who plays Santa Claus in this goddamer?  GEORGE.  WENDT. 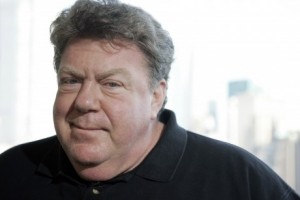 George is as suspicious as you are that he’s still alive.

And don’t put away your “Cheers” pennants yet, because who is playing his wife?  Mother fucking Diane!: 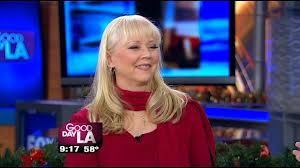 “Ehhhhhh…this scarf is the only thing keeping my head on my neck.”

The movie begins and we are introduced to a picture perfect young couple as they bone in the morning.  This is so obviously a Lifetime movie – you can’t pull that PG-13 crap on the Hallmark Channel.  The couple are Peter and Alex, and guess what?  Peter is a kindergarten teacher, and Alex is a scientist!  A fie on your gender roles, this is 2012!  Ladies can put on glasses and be scientists, so long as their hair also happens to be in a ponytail!  Alex has a son from a previous marriage, cementing the long-standing holiday movie tradition of single moms having all the sex.  This son is named Max, and he is a student in Peter’s class, which seems like a conflict of interest to me.  Is that how they met?  Does Peter call “parent-teacher conferences” so he can bed unsuspecting single moms?  Yes.  Yes, he definitely does that.  What a scumbag!! 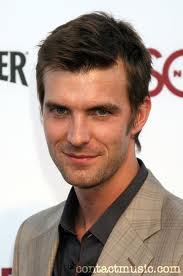 Well I guess Peter liked sexing Alex the best because he totally proposes.  And her weiner kid is there the whole time smiling with his moony face.  He is a dumb. 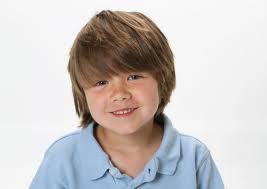 Look at this hairdo. Justin Bieber has turned a whole generation of boys into things I want to punch repeatedly.

Alex tells her parents who are none too thrilled with the news.  They are cold calculating professionals who have no feeeeeeeeelings.  It is hilarious how dismissive they are of her relationship and her fiancee.  Her Dad wants her to marry a fellow scientist, and he references how she got pregnant at a Stephen Hawking conference.  Are you serious?  We’re not expounding on that?  Is the insinuation that Stephen Hawking is her baby daddy?

Well, maybe they’ll have better luck telling Peter’s parents about the engagement.  He invites them into town to meet Alex, and good Jesus Christ they are dressed like this: 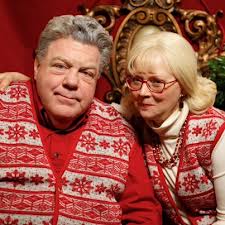 Look at these fucking gangsters.

They swoop in and just start shitting Christmas cheer all over the place.  Grandpa (Mr. Santos Claus – LOLOLOLROFLLMAO) brings little Max the toy his cold Mother wouldn’t buy him, and Grandma makes a million perfect Christmas cookies, and the sound of laughter fills the home.  It’s the stuff of logical Alex’s nightmares!  And Grandma/Shelley Long is breathing SO HEAVILY the entire time.  Even when she’s standing still, she sounds like Tony Soprano circa season 6.  And then during a baking session with Grandma and Alex, we get a really random music montage where the two of them dance and sing and touch butts. 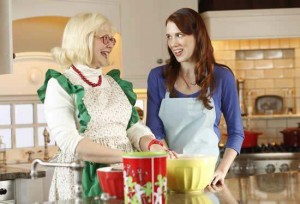 They were one shared bottle of Arbor Mist away from an eye-opening sexual experience they would never have spoken of again.

Everyone’s floating on good times and whip-its (I assume) and just singing all the time.  Like, they just keep breaking out into terrible off-key singing.  But then Alex’s grumpy clinical parents arrive and I am actually rooting for her Dad to ruin everyone’s holiday.  He’s already told Max there’s no Santa, now he just needs to hide Pete’s Dad’s insulin and it’ll really be a party.

Alex’s Mom tries to psychoanalyze Mrs. Santos, but no one puts Shelley Long on the therapist’s couch, and she flips the script.  Christmas cheer in your face, bitch!  Alex’s Dad goes into her lab with her and tries to get her to agree to marry her dead-eyed scientist partner.  Meanwhile, Peter is rehearsing the school Christmas play with some help from his Dad, who basically tries to steal focus by sliding down fake chimneys and making it snow.  Just being a big old show-off, really.

Oh, and this entire time Mr. Santos Claus’ sleigh has been in the garage because it’s broken, laying the groundwork for a harried race on Christmas Eve to get him back in the sky for present delivery.  And also affording Santos the opportunity to dress like the world’s jolliest gay blacksmith.

“I’m telling you, I know how to get rid of a dead body. Drag that barrel over here and let’s get cracking.”

There is also a weirdly hyperactive and falsetto elf running around trying to fix the sleigh without being seen.  Alex’s creepy scientist lab partner is on her property for no reason and snaps pics of Peter and the elf looking cozy.  I’m worried someone will mistake their closeness for intimacy.  Or maybe nothing will come of it!

Alex confides in Santos that she wanted to believe in Santa Claus SO BAD when she was a kid, but she never saw any proof, so BAM!  Scientist.  What a cautionary tale!  No time to read into it, as Alex’s hippie actress sister has shown up for the holidays to believe in Santa right in everyone’s face, and to do yoga on the roof.  This girl?  Forget this girl.  I’m pretending she doesn’t exist.

Max is the first member of this idiot family to put two and two tacky Christmas sweaters together and realize that this new fat jolly sonofabitch in his house is actually Santa Claus.  He confronts Peter about it, and basically tells him to sack up and tell Alex.  He’s weirdly aggressive, and I don’t care for it.  But before Peter gets a chance, Alex finds the pictures of him and the elf and she is being totally unreasonable about it.  He yells, “My Dad is Santa Claus!!” which usually works on chicks, but this time does not.  🙁 🙁 🙁 🙁  Alex tells them all to get out by Christmas Eve.

Alex’s lab partner confesses his love for her, but she’s like, “Ewww, gross!”  That’s the end of that storyline.  Then she tracks the course of a “meteor” that happened to streak across the sky the day that Peter’s parents came into town.  Wait a minute, it wasn’t a meteor at all, it was their sleigh!  She belieeeeeeeeeeeeves!!!  And just in time for the school Christmas play, which is some cray good timing.

The Christmas play sucks.  All the kids in it may as well have killed Santa. 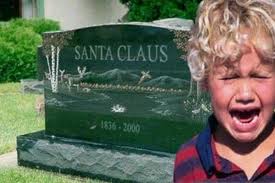 Be it forever on your heads, children.

But after the play Peter’s Dad reveals himself to be Santa, and Alex feels like a total heel.  Will Peter forgive her?  Of course he will!  Especially since she helps his Dad fix his sleigh.  All is well.  Except for the health of George Wendt, who I think stood up in this movie for a total of 6 minutes.  Is he….is he OK you guys? 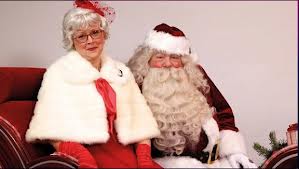 The other side of that beard is covered in vomit.

And that’s another Christmas movie in the garbage bag.  I love you so much, you guys!  Happy Holidays!!! 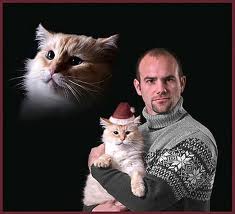