You guys – how are we already here again?  Back to reviewing made-for-TV Christmas movies?  We’re not even halfway through November, and Lifetime and Hallmark have launched their assault on good screenwriting and our capacity for schmaltz.  THE CHRISTMAS ROMANCES ARE BACK, AND THERE’S NOWHERE TO HIDE!!!!

Last year we got to enjoy the Hoff being creepy, Gretchen Weiners getting hooked up by Santa, Princess Leia in a Poor Man’s “Christmas Carol”, and Norm and Diane from “Cheers” being Christmas weirdos.  How will we ever top that? 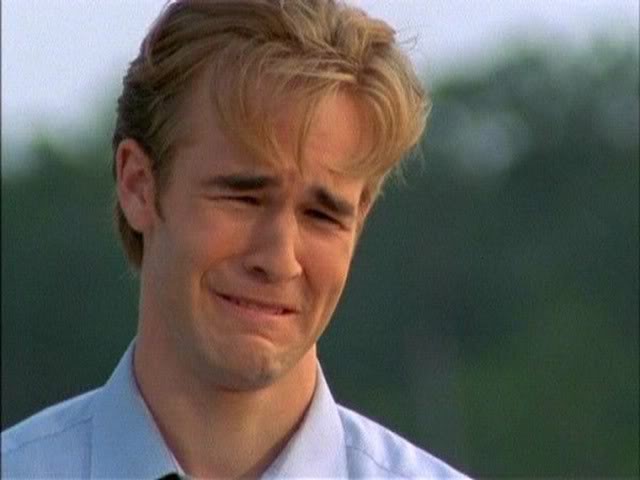 How about with a movie starring Dawson Leery?  A movie that’s 4 years old?  It’s worth a shot, friendos!!!  To “Debbie Macomber’s Mrs. Miracle” we go!!!

We are introduced to Dawson as our overwhelmed protagonist, the father of two overactive 6-year-old twins.  There is a very concise sequence where we see these two Damiens chase off 3 different nannies by doing the following UNACCEPTABLE things:  1.) Letting the dog in the house, 2.) Wearing masks and yelling ‘Boo’ and 3.) Throwing snowballs.  Christ – send them to Juvie!!  I forgot that this is a Hallmark movie, and the Hallmark Channel is the Lifetime Network’s prudish Mid-West cousin who disapproves of most things, so these kids are one glass of spilled milk away from being labeled with the Mark of the Beast. 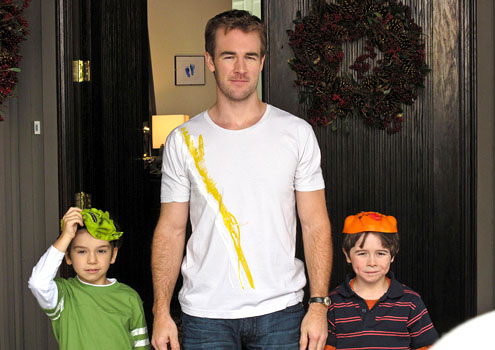 The last worthless nanny to leaves scolds Dawson, telling him what he needs for his children is a MIRACLE.  So, you know – the nanny who sticks will be named Mrs. Miracle and it’s embarrassing you didn’t know that.

To add unnecessary treacle to this movie, we find out Dawson is saddled with these kids because their mother is dead.  WILL THIS WIDOWER EVER FIND LOVE AGAIN?!?!  EVEN AT CHRISTMASTIME?!?!  Also, it bears mentioning that there’s a piano in the house that is going un-played.  But his sons have volunteered for the school Christmas Pageant, and their teacher says they show real talent.  “Does it run in the family?”, she wants to know.  “They’re really good at Nunyo”, Dawson replies.  “As in, NUNYO BIDNESS.”  Ooof, BURN.

Next we meet Reba (*massive eye roll*), a pretty young travel agent who has never been to any of the places she sends her clients.  She has a judgmental mother and a sister she’s not speaking to, so the stage is set for reconciliation, yo.

The newest nanny comes by, and the twins attack her with snowballs.  But like some fucking Dottie Hinson, she catches them before they hit her and throws them back.  But!  Would we really expect anything less from Doris Roberts? 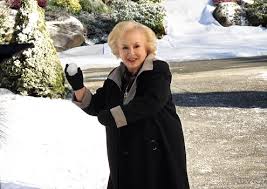 She loaded these with ball bearings, the carnage was unbelievable.

She introduces herself as Mrs. Merkle, but she says it like a mealy-mouthed weirdo, and so it sounds like “Mrs. Miracle”.  CLEVER GIRL.  She immediately comes in and takes over and brings dinner and gently mocks Dawson for being an architect.  (Rightly so!)  The house is clean, the children are fed, and now Dawson has a lot of free time to think about how he’s super lonely and riddled with STDs.  (I assume)

Meanwhile, at the Christmas Pageant rehearsals, the elderly Choral Director falls off the stage and hurts herself pretty badly.  The twins just laugh at her, further validating their label as sociopaths.  Who will they get to step in and take over?  Reba, apparently.  Because she’s been in plays or something, and also because it’ll help her love Christmas again?  I can’t wait to hear that the reason Christmas is tough for her is because her sister stole her man or all her Rolos or something on Christmas Eve a few years ago.  Something really traumatic, you know?  My sister once caught me stealing a candy when I was 6 years old and used it to blackmail me for 4 1/2 years.  This aside brought to you by my sister being kind of an asshole to me growing up.  (And my being a gullible idiot)

Mrs. Merkel is being super nosy about Dawson’s dead wife, and he is NOT having it.  She’s all, “Your sons should know their Mother!”, and he’s all, “I DON’T WANT, YOUR LIFE.” 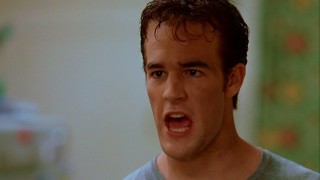 The force of his acting in “Varsity Blues” kept his mouth open for 17 days.

Dawson goes to pick up his child-devils from Pageant practice, sees Reba directing them, and is instantly attracted to her.  Which would explain his abysmal prat-fall into all the set pieces.  You’re no Chris Farley, Dawson.  Please understand me – that is an insult.

He looks Reba up at her travel agency and asks her out while also booking a trip for his sons.  Because nothing says romance like, “I have two kids!  It’s twice the baggage!  They can be yours if you want!!” 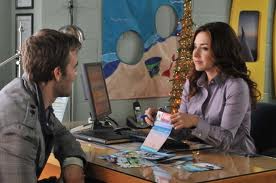 “This is my laminated list of all the reasons I don’t want kids. It’s laminated because of all the drugs and booze I spill all over it because I live a life EMPTY OF KIDS.”

They go out, blah blah romance, blah blah blah.  Reba mentions there was a guy she used to see play the piano at a movie house she went to, and he’s all “THAT WAS ME!!!”  And she’s all, “PUT IT IN ME!!!”, and he’s all, “I CAN’T – EMOTIONS.”  He explains that he doesn’t play music anymore because his dead wife loved it, and…I dunno – her vengeful ghost will come back to haunt him if he does?  His logic isn’t airtight.

HOLY SHIT – next week the Hallmark Christmas movie is something called “The Christmas Ornament” starring Kellie Martin, AKA Corky’s sister from “Life Goes On”.  Oh man, why aren’t there any Christmas movies starring Corky?  Oh God – is it because he’s dead?  I can’t even look it up.  It’ll wreck me.  I will continue to operate under the assumption that Chris Burke is alive and well, because I NEED THIS, OK YOU GUYS?!?!

Back to the movie.  Dawson has just realized that Mrs. Merkel did not come through the Terrible Nanny Agency he’s been using.  Buuut, he doesn’t really care, he’s trying to get his dick wet.  (Credit to Ryan Conner for that phrase)

Reba comes over for a dinner at Dawson’s house while Mrs. Merkel sweeps the kids away to a movie.  They make out, and so in Hallmark Channel land that means they’re basically married.  The twins approve: 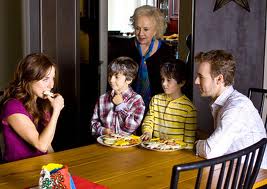 “Eat these cookies we made you, new Mommy! The flour is made from the crushed bones of the Mommys who came before you!!”

Reba’s Lululemon Mom asks her to skip the Pageant and hang out with her sister on Christmas Eve.  BUT – Reba’s sister Vicki stole Reba’s fiancee, it seems – and she just cannot see her!  Even though she never married the fiancee (another Hallmark trademark – they can’t reconcile if Vicki’s still with the guy), it just hurts too bad!  Pfffft, if only Vicki and Judge Dredd Mom Version would just come to the Pageant and everyone could make up?  Maybe….maybe….

Dawson and Reba run into home-wrecker Vicki at a weird underground Kmart, and Reba straight freezes her out.  “I will not reconcile next to the VHS bin!!!” I assume she screamed.  Dawson tells Reba to maybe grow up and make nice with Vicki.  Reba is all like, “Your dead wife is basically the Rebecca of this budget-ass movie, but you’re gonna judge me?!?!”  And I’m all, “Yeah gurl.  Yeah.”

The old bag who played the piano for the Christmas Pageant wins a millionth customer contest at the local Piggly Wiggly, and is just GONE.  Reba is freaking out because who will play the tunes now?  Now that Original Piano Ho has assuredly trekked off to Vegas to put some of her dollar bills into the unwilling g-strings of “The Thunder Down Under”?

Reba remembers some dialogue from earlier in the film, and asks Dawson to play the piano.  He’s like, “Naw, bitch.  My dead wife and shit.  Sorry I’m not sorry.”  She gets mad, they argue in a stairwell, I eat a Kit-Kat.  He says she needs to get over her sister’s betrayal, she says he needs to get over his wife’s betrayal.  I mean, how DARE she die on him?  Ugh.  Someone didn’t take their marriage vows seriously.

Reba has an intense night of losing her keys under her car, that makes her re-evaluate her life.  She goes to Vicki’s house and forgives her, but fuck!  Vicki can’t play the piano so what was the point?!?!  Meanwhile, Dawson decides to pull his dead wife’s ashes down from the top of the linen closet (normal) and tell his weird twins about her.  Her favorite color, her favorite present, how she’d rather die than raise up two baby-Hitlers like these (I assume).  It’s beautiful.

The Christmas Pageant is about to begin, and Reba does some terrible stand-up to open the night.  Booooo, Reba!  Stop talking about your period!!  But what now?  There’s a handsome Dawson Leery stepping in to ride the piano bench.  Perv. 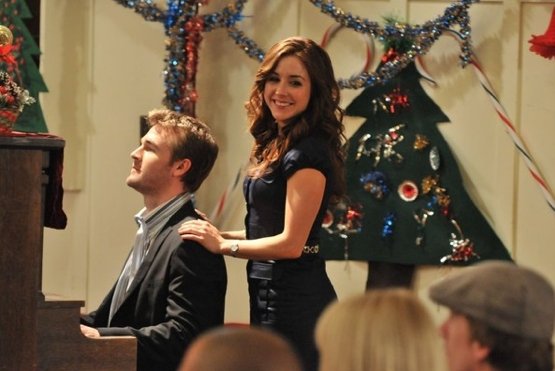 “He’s locked to the piano by an elaborate Saw-like device I’ve attached to his ankles! And by “ankles” I mean “ballsac”! Merry Christmas!!!”

The Pageant is a huge success, and the sociopath twins play angels.  This hilariously sets them up for the follow-up movie in 30 years where they star as “Angels of Mercy” and just murder lots of ER patients.  So….yay?  Sequel?

Mrs. Merkel tells the twins she loves them but has to go, because she has to take care of other families.  It’s a transparent attempt by her to get away from the two kids who will almost certainly cut her fingers off in a few years.  Save yourself, Mrs. Merkel!  They have your scent now!!!

And then the movie ends.  But we should always be careful, because this meddling-ass old lady could be trying to clean our house and raise up our kids right only to make them hungrier for human flesh: 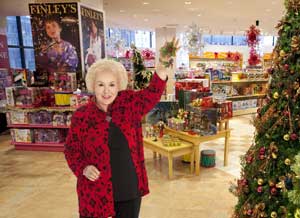 “Fuck you and fuck your kids! I just made it worse!!”

Merry Christmas, y’all!  And so it begins again!!!