I know this is a super-hacky joke premise, but it genuinely does seem like the Christmas season starts earlier and earlier every year.  It’s only a matter of time before that Folgers commercial with the son who comes home early from the Sudan or wherever to share a cup of terrible coffee with his family starts making me feel all the feelings. 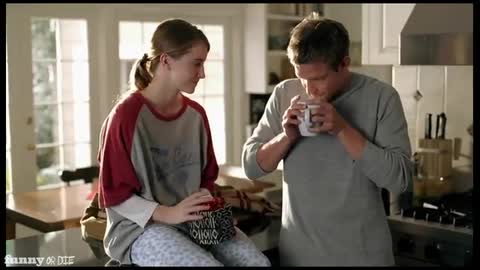 “Go ahead, open it! It’s full of all the human ears I kept as trophies!”

I made a solemn vow (to no one) to do as many Christmas reviews this year as possible, because these movies are ripe for mocking.  And I fully intend to keep that vow (the one I made to no one, because come on – who’s keeping track of these?), and am aiming for a Christmas movie review a week.  (no one cares)

So!  Onto “The Christmas Ornament” – a Hallmark Channel Original Movie starring Kellie Martin.  You know her as Corky’s sister from “Life Goes On”, and probably nothing else.  The movie opens with a scene of our heroine Kathy skating alone by herself in an ice rink.  There is literally a song playing with lyrics like, “I miss you at Christmas” and “I’m so lonely” and “Flip to Side B for easy-to-make recipes for one, loser!!”; so I’m assuming we’ll find out shortly that Kathy is a widow.  I mean, I haven’t seen sad solitary skating like this since Gordon Bombay in “The Mighty Ducks”.

They sent this guy to work with lonely vulnerable kids, because things were just done RIGHT in the 90s.

Kathy finishes up her cry-skate and bikes to work, losing her gloves on the way.  I assume this will be important, because the camera lingers on them for a hot minute.  Anyhoodles – Kathy owns a bike shop called Dream Cycle and they are NOT doing good business this holiday season.  There’s an old coot trying to steal her business space lease, so she’d better start selling OxyContin out the back room or something.  Instead, she’s spending a lot of time baking Christmas cookies.  That will probably work too.

Kathy’s sister/friend picks her up and forces her to go Christmas Tree shopping.  Kathy is acting like she’s fucking allergic to trees, which is weird.  So you’ll bake cookies but trees are out of the question?  Maybe a Douglas Fir fell on her husband and crushed him.  While wandering the gift shop, (which is filled with ornaments – squeeeeeeee!!  Just like the title!!!) she runs into Tim, the ruggedly handsome owner of the Christmas Tree shop.  Sparks flyyyyyyyyy.  Until she starts gabbing about her dead husband, who apparently died a month after opening the bike shop.  Yikes!  Maybe he was actually crushed under the weight of all the new Quickbooks software he had to learn to figure out their payroll.

By the way, Kathy’s sister or friend (TELL ME, HALLMARK) Jenna is played by Jewel Staite, who is the adorable actress who played Kaylee on “Firefly”.  Oh man, how great was “Firefly”?  So great.  But!  Did you know she was also the STAR of her very own Hallmark Christmas movie?  And that it was starring Mrs. Merkel, the meddling nanny from my last review?  Check it, bloods!: 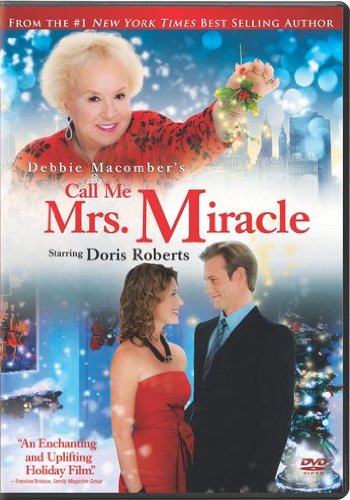 Look at this evil bitch. That’s poison ivy she’s about to drop on them.

I guess it’s a sequel or something?  I watched it once and didn’t even write a review.  That’s right – sometimes I just watch these for FUN.  (Cry for help?  Yes.)

Back in Kathy’s world, she heads in for another morning skate and look who’s there!  Tim!  He also likes to skate and emote!  He asks her why she shit all over his small business and didn’t buy a tree from him.  She’s like, “My dead husband loved ornaments!  I just can’t, because of the pain!  He also loved loofahs, so I haven’t showered in a year!”  She is never gonna close the deal with Tim if she keeps bringing up the corpse she lovingly caresses every fortnight in the basement.  (Speculation)

But no one cares about Kathy’s weird hang-ups, and so Jenna forces Tim to take a Christmas tree over to Kathy’s house anyways.  And so begins a hilarious new tradition of Kathy sneaking around her house and giving the Christmas tree side-eye.  She thanks Tim with cookies at his shop, and they are a HUGE hit with all his customers – some of whom even ask her if she’d ever consider selling them.  And she’s like, “Naw, no way.  I definitely just got out of a meeting with my accountant who said I’m about to go bankrupt and lose EVERYTHING, but I don’t think I need extra money coming in at all.  LOLOL!”

Another day, another coincidental meeting at the ice rink for morning Sad Skate. 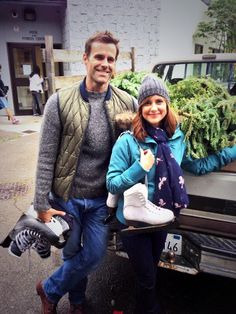 Notice how he’s running his thumb along the blade of his skate. He just wants to feel SOMETHING….ANYTHING….   *

After the couples skate, Tim ropes Kathy into helping him deliver Christmas trees.  Because seriously no one in this movie respects her tree PTSD.  They deliver to an old folks’ home and mock the people who will be celebrating their last Christmas, they carry a tree up 6 flights of stairs and share secrets on the way.  Dude – shouldn’t she be at the bike shop?  No wonder that place is going under.  While she’s out gallivanting around town with the World’s Handsomest Vest Wearer, the only people in town who would have bought a bike from her had to take their business elsewhere: 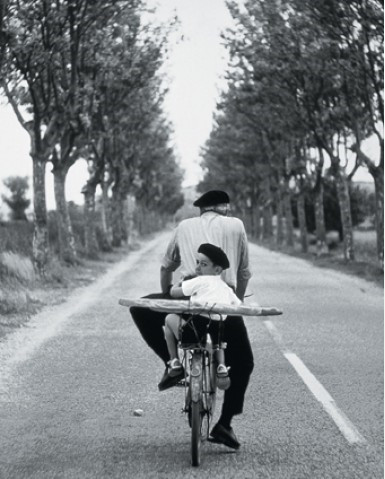 She could have overcharged them like crazy, too. They wouldn’t have FOUGHT her on it. *high fives self*

Thanks to all this hot Christmas tree action being in her face, Kathy has a change of heart and goes home and emotionally decorates her tree.  Does she put the world’s coolest ornament on there? 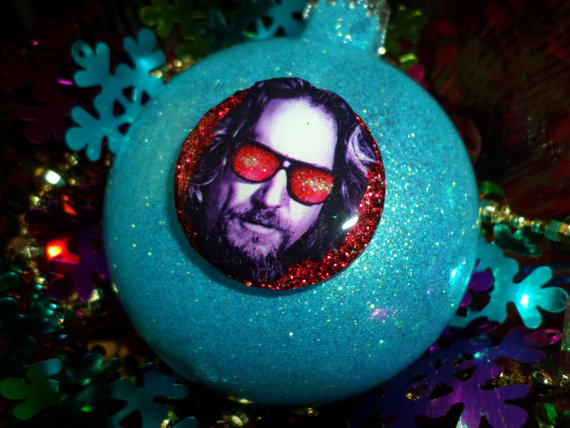 No, because she sucks.  But her Christmas cookies are the bomb dot com, and so Tim demands she bake more that he can sell at his shop.  And she does, because at this point she’s just abandoned her own business I guess and is focusing all her energy on Tim’s.  But it’s cool, because he gives her mittens, and if you’ll recall, she lost her gloves earlier.  FINGER-RELATED COURTSHIP!!!

Tim points out that Kathy’s heart isn’t really in the bike business, and maybe she should just bake cookies full time.  She says she has to keep the bike shop open because it was her dead husband’s (HIM AGAIN) dream, and she’s honoring his memory by keeping it open.  So!  That means by the end of this mess she will turn the bike shop into a cookie store, proving that she’s moved on from the loss of her husband while simultaneously shitting all over his memory.

Tim buys a Christmas tree farm, and he and Kathy have a classic Hallmark movie snowball fight there that leads to a lame makeout session.  He tells her that he’s loved her since she pushed an ornament in his shop away from the edge of a table, proving that he has disturbingly low standards.  I remember that scene, she was walking all around his shop like her TV brother, Corky: 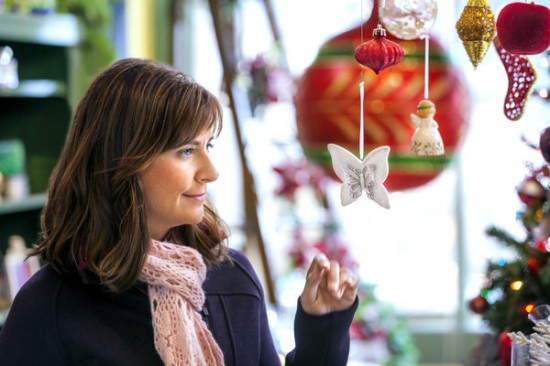 That was an insult to Corky, and I apologize.

So just as things are heating up to a red hot close-lipped courtship between Tim and Kathy, Tim’s weird-looking ex comes back to declare her love for him because of course she does.  All of a sudden Tim isn’t showing up to morning skate anymore, and just as Kathy has decided to sell the bike shop and start baking cookies!!  This will make her doubt her choices!!

Ahahahaha – in a hilariously on-the-nose scene, after Tim blows her off, Kathy goes in to her Christmas tree, knocks into it, and an ornament he gave her falls off in slow motion and shatters on the ground.  The music was more dramatic than the soundtrack to “Schindler’s List”, and I am laffing all the laffs.

She is going ahead with her life plan, though.  And she takes Jenna out to Tim’s Christmas tree farm to show her the little hut on site where she has decided to start selling her cookies full-time.  Now off to his Christmas tree shop to clear all of this with him!  Oh noes, Tim is there being touched on by his ex and Kathy freeeeeeeaks out.  She races home and takes everything off the Christmas tree and now she’s skipping morning Sad Skate.  Ugh, you GUYS – how are you ever going to beat Dorsey and Moseley for a spot on the Olympic Team if you’re never even in the same rink together?

“Your turtlenecks get me so fucking hot.”

Tim pulls up to Kathy’s place just as she’s taking the Christmas tree out to the curb, and they have a fight about love and exes and timing and something about buses?  All over the place, these two.  But nothing is resolved.  Waaah waaaaah.

Kathy fills a huge Christmas cookie order with a woman who offers to invest in her business.  Cool, moving on!  She gets home to find a Christmas ornament from her dead husband, who ordered it before he died, all “P.S. I Love You” style.  IT’S THE SAME ORNAMENT THAT TIM HAD GIVEN HER THAT BROKE OH MY GOD IT’S A SIGN *()&*#(^&*&%^*#.

She runs to the Christmas tree shop, but Tim has abandoned it and left a sign that says “FREE TREES”, because everyone in this town is a bone-headed small business owner.  Kathy takes one home and decorates it, and all of a sudden Tim is there!  Him letting himself into her home aside, they reconcile and kiss with tongues by the light of the tree.

“Do you see him? The Gremlin who lives in there? He whispers demands from the Dark Lord, and I must obey…”

And that’s a wrap!  Two down, many more to go!  Because Christmas Cheer, or whatever!  Love you, KIT!