The SyFy Channel hasn’t had an original movie worth reviewing in a minute, and I may have to wait a little longer for Lifetime to get it’s shit together and premiere something worth getting drunk and watching.  But I felt like putting more buffoonery on the internet, so without further ado – a review of “The Neverending Story”!!!!

Full Disclosure: I have loved this movie since I was old enough TO love, so all the jokes I make at its expense will likely result in me being racked with a guilt that wakes me up at night in a cold sweat.  So let’s get on with it!!

As I’m sure all of you know, the movie begins by introducing us to Bastian – our hero/framing device with a dead Mom and a dad played by Major Dad.  He’s a bookworm who loves horses (“Unicorns!”, he corrects his long-suffering Father) and hates paying attention at breakfast.

“Is this the shocker, Dad?”

On his way to school, he is dumped into the garbage by two bullies who hilariously wait right outside said garbage just to dump him in again, like they work for the garbage lobby or something.  Bastian flees to a local bookstore, and gets into an argument with the creepster librarian about “safe books”, and now that I’m an adult I am getting CRAZY Amber Alert vibes here.

Bastian steals the librarian’s book, “The Neverending Story”, and runs to school to read it in the attic.  He’s avoiding school so he can read all day, which – OK.  But now that the very sad and isolationist scene is set, we can journey into the story within the story!!

In the magical land of Fantasia, a group of weirdos is discussing how the world around them is disappearing.  Some amorphous evil called The Nothing is destroying everything, probably because it’s bored.  We got all the freaks, here!  SOUND OFF!

Stress-eater the Rock Biter, and his BIG, STRONG HANDS:

“DO YOU GUYS WANNA SPLIT A PINKBERRY?” 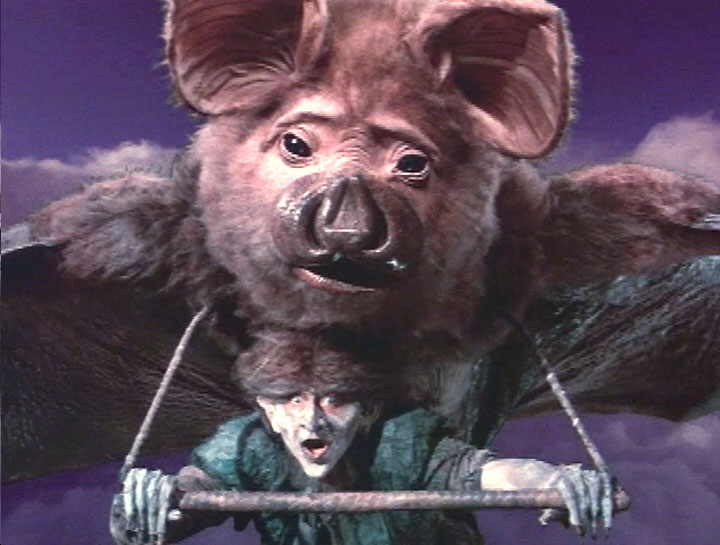 One of these guys has autism. The other one is a giant bat. Psych! They both have autism.

And this fancy bitch and his racing snail: 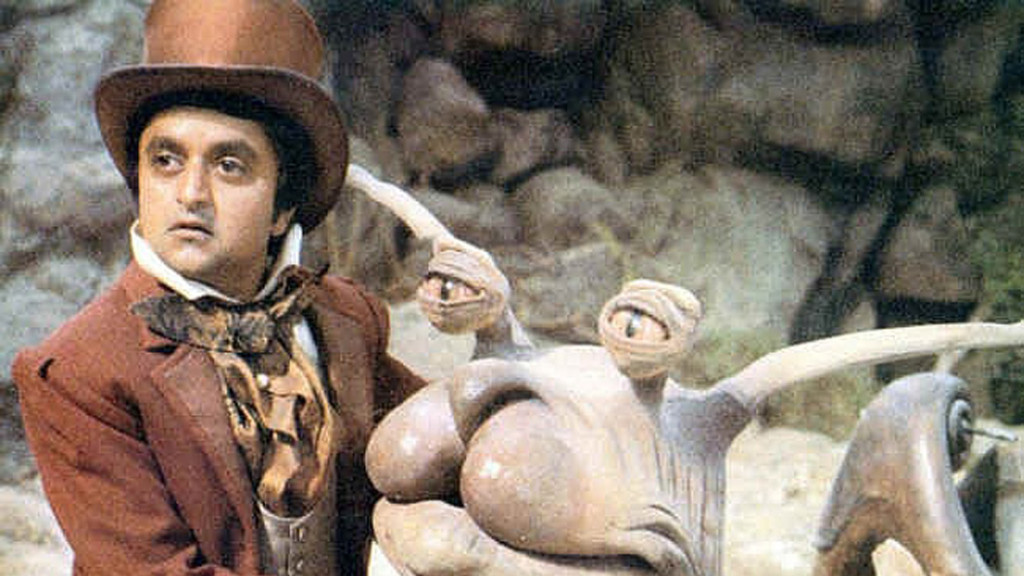 Haters to the left.

DUDES.  This character’s name is apparently “Teeny Weeny”.  But wait – it gets better!  The actor’s name is Deep Roy.  Deep Roy.  That sounds like the name of a Alabama date rape drug.

Anyhoodles, this band of heroes journeys to the Ivory Tower to ask the Childlike Empress – the Ruler of Fantasia – what they can do to stop the Nothing that is eating away at their world.  But rut-roh!  She’s sick, and cannot save anyone.  Spokesman Black Gandalf gives them the rundown: 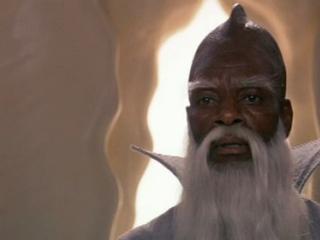 “Everybody is going to die.”

Unless a brave warrior steps forward to save the day.  Do we have any volunteers?  No?  How about the giant guy made of rocks?  I bet he’d be hard to kill.  No?  *sigh*  FINE.  How about a child who won’t stop bragging about killing purple buffalo?  Do we have one of those? 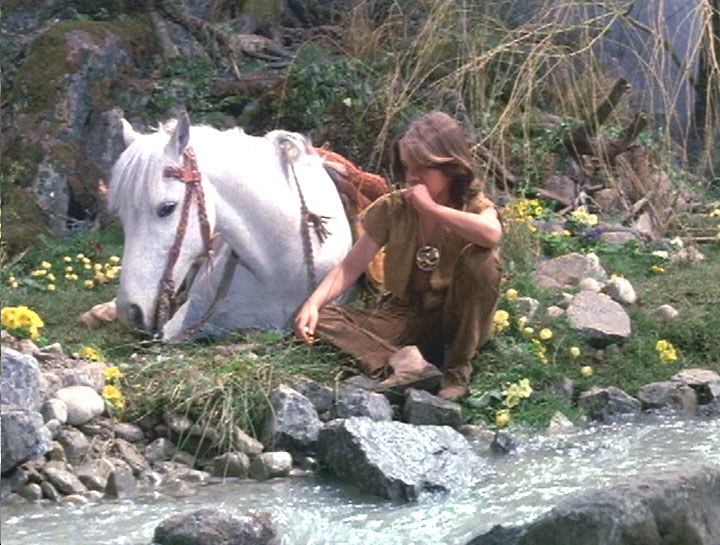 “I brought my own horse – so I may be OVER-qualified, actually.”

His name is Atreyu, his horse is Artex, and they are the baddest mother fuckers in all of Fantasia.  Atreyu is given a necklace of snakes eating their own butts, and sent off with the vague directive to save everyone from the Nothing.

Meanwhile, back in the real world’s worst school where musty old attics are just left open and no one takes roll call, Bastian is with Atreyu every step of the way.  It’s like, whoa – get your own life. 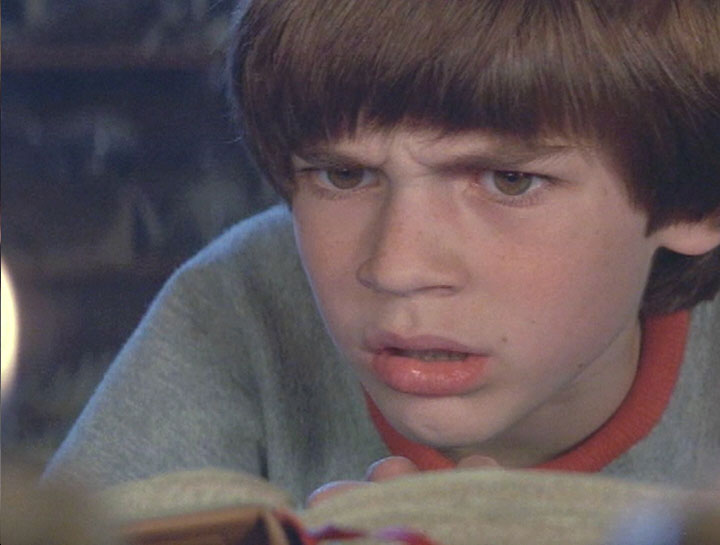 Atreyu and Artex travel through forests and deserts and some other anonymous backgrounds before arriving at the Swamp of Sadness.  Fun fact: the Swamp of Sadness is where little Erin Conroy’s heart was broken into a million pieces, as she learned that sometimes even beautiful horses die!  That one day, we’ll all die!!!!! 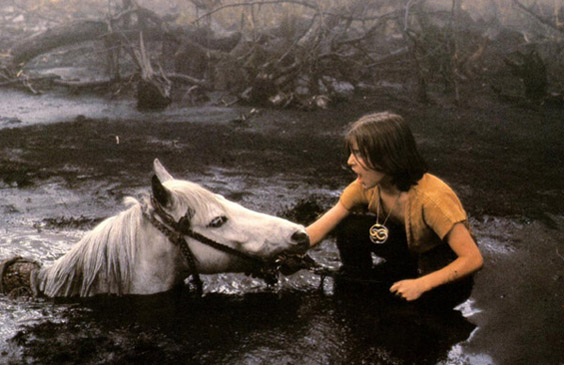 Artex, no! I’m too young to think about the futility of life!!!!

Atreyu journeys on, horse-less and occasionally hearing the screams of an emotionally-invested Bastian, who’s reading along.  After being told he needs to travel 10,000 miles to visit the Southern Oracle by a giant turtle with allergies: 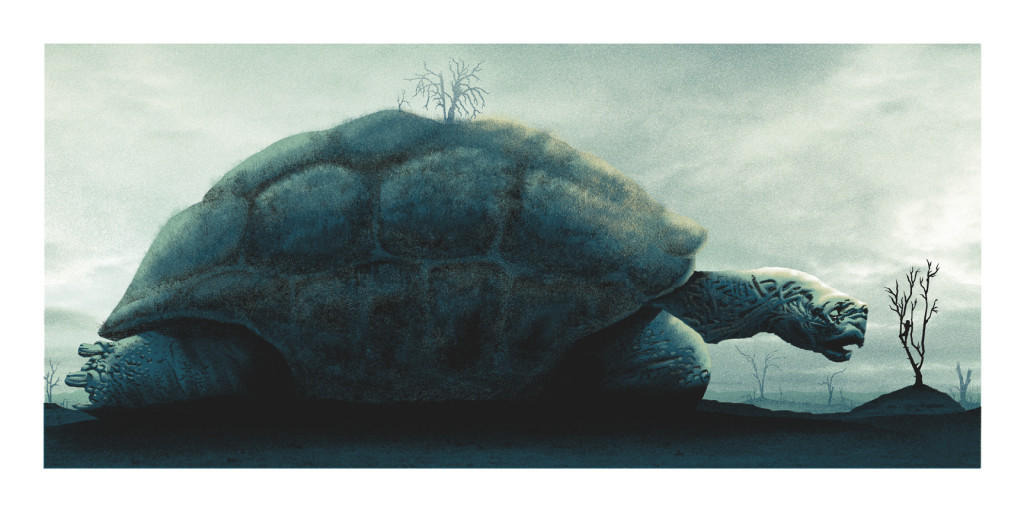 “We also have Hepatitis C. We used to party with Motley Crue.”

Atreyu is almost ready to give up.  I mean, his horse died, you know?  He hasn’t even had a chance to cook the meat yet.  Just as he’s about to collapse in a swamp and be eaten by the wolf that has been stalking him for days, he sees a white figure in the sky and then passes out.  Ugh – been there myself, man.

The next morning he wakes up in the furry embrace of a Luck Dragon, with no memory of how he got there, and he totally tries to sneak out. 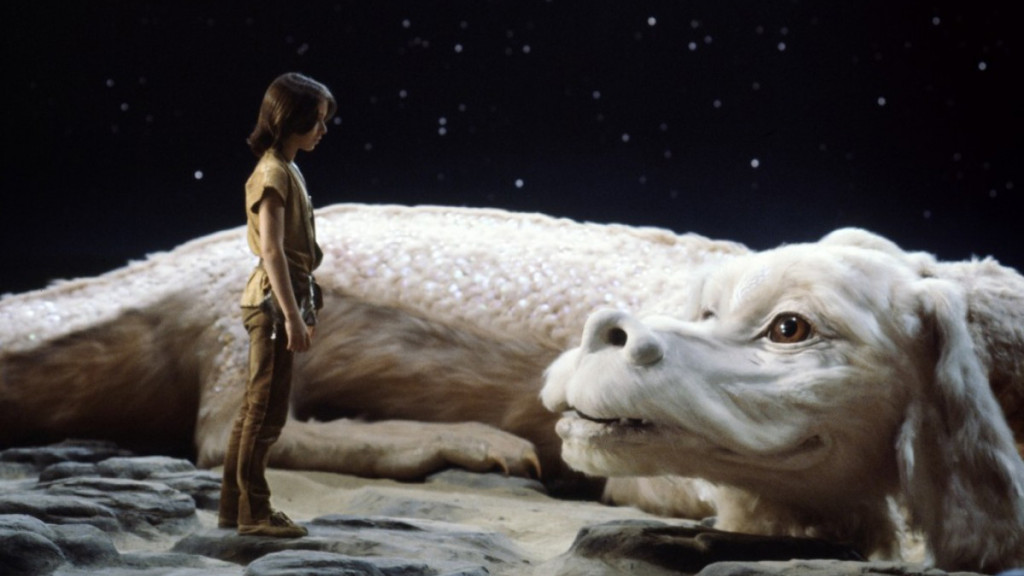 “Where are you going? I thought we were going to get breakfast!”
“Oh, I’d love to – but I have this early meeting…”

Falcor the Luck Dragon informs Atreyu that he flew all night and brought him almost the entire 10,000 miles he needed to go.  So maybe a little fucking GRATITUDE is in order?

He then meets a married couple of witch doctor goblin things who are supposed to provide comic relief with their bickering, but now just depress me.  Marriage is so hard, even in fantasy worlds! 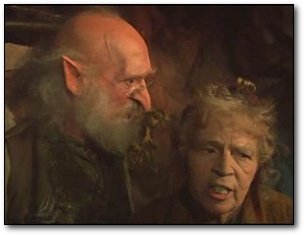 The old man takes Atreyu to a gate he must clear before reaching the Southern Oracle.  He tells him that the naked statues of this gate will look into his heart to see his true intentions and judge his confidence.  Or some similar Psych 101 bullshit.  And Atreyu is just like, “As long as they can’t see into my pants!!” 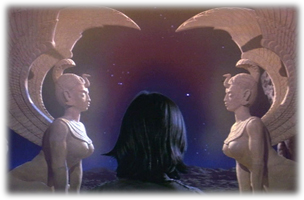 Atreyu clears the gate by juuuust barely missing being shot by naked-lady-lasers.  The movie delves even deeper into psycho-babble, as the next gate Atreyu must clear is the Mirror Gate, where he must FACE HIS TRUE SELF.  Which apparently no one has ever been able to do before, without going mad.  Like, that is some heavy shit.  What if Atreyu sees his own Father?  Or Adolf Hitler?!?!?  But chill out, he just sees Bastian: 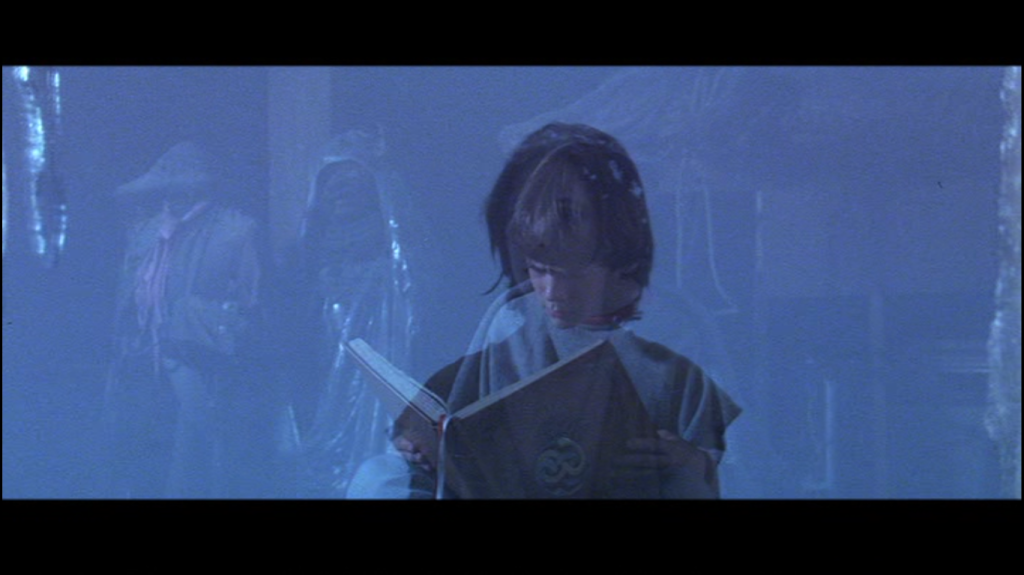 “Is that my sweatshirt? Did I say you could wear it, dickbag?”

Bastian has a mini-freakout in the attic after reading this, because yo.  He didn’t even drop any acid today, so what gives?  But he reads on.

Atreyu makes it to the Southern Oracle, which is hilariously the exact same statue set-up as before, only blue.  But blue is how you can tell a statue is the real deal, oracle-wise. 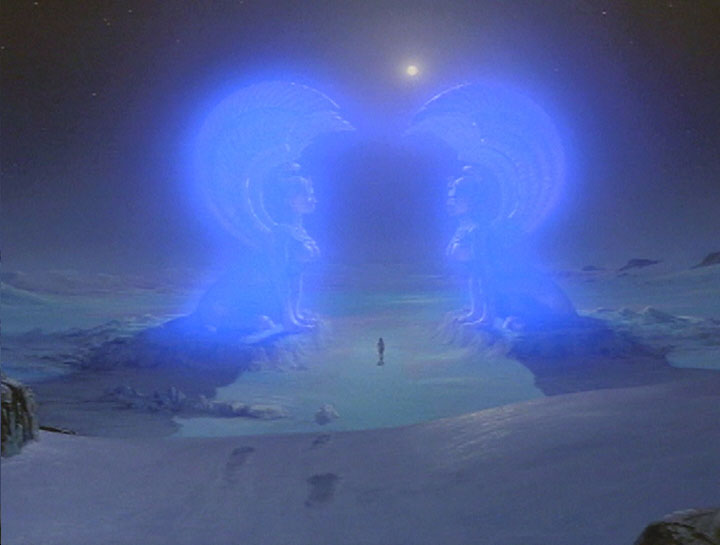 “Go ahead. Ask us who Keyser Soze is. Because we totally know.”

The Southern Oracle tells Atreyu that he can save the Childlike Empress and by extension Fantasia, if he finds a human child to give the Empress a new name.  (BASTIAN ALERT)  And Atreyu is like, “What the fuck is a human child?”, and the Oracle is like, “We can’t explain everything to you for Chrissakes.  We out.”  And they crumble into nothingness.

Atreyu gets back on Falcor and flies to the boundaries of Fantasia to try and find a human child.  There’s a Sharknado or something, and the two get separated.  Atreyu wanders around some ruins until he runs into a wolf hanging out in a wall like it’s no big deal. 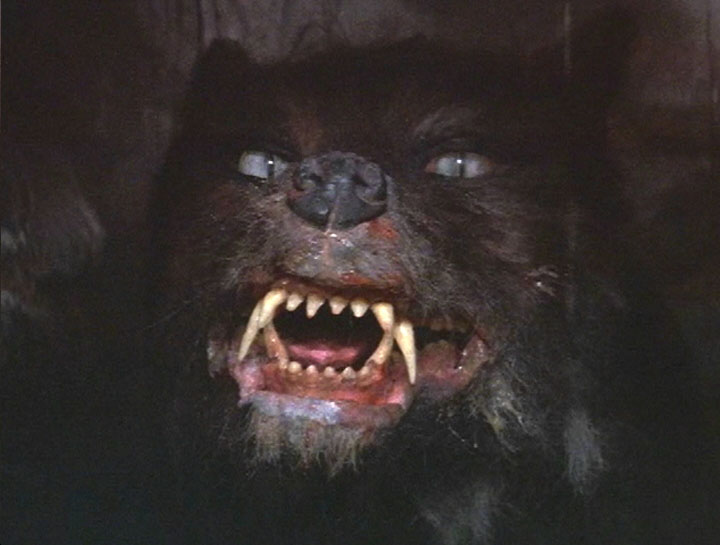 This wolf is the Nothing, and he is being a REAL dick about how Fantasia is ending.  His one regret is that he never found and killed the brave warrior Atreyu.  Atreyu is like, “TWIST!  I’m Atreyu, and you should come at me, bro!” 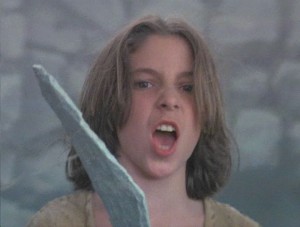 “You are no match for my clay-covered boomerang, probably!!”

The Nothing jumps out of the wall, Atreyu stabs him in the belly, and it is over.  Super super anti-climactic, if we’re being honest here.  But onwards!

Atreyu and Falcor fly to the Ivory Tower, so Atreyu can tell the Childlike Empress that he’s a big loser who couldn’t find a human child to name her.  And she’s like, “Oh you sweet dummy – the human child is with you right now.  It’s Bastian, and if he would just stop being a total puss and yell a name out the window for me, everyone would be saved!” 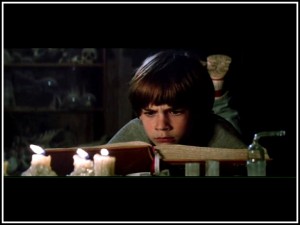 “Oh, I’ll DIE before I take orders from a WOMAN.”

But Bastian sacks up, runs to the window, and yells a name that my friend Katy and I swear sounds like “Mortal Kombat”.  He did it!  He saved the Childlike Empress and her over-emotive face!! 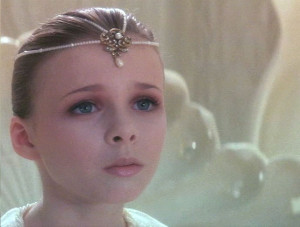 “I feel so many feelings, Bastian.  Mostly gratitude that this is a pearl headdress and not a pearl necklace. Kids movie, after all.”

As the Savior of Fantasia (thanks for nothing Atreyu, go kill some more purple buffalo), Bastian is granted unlimited wishes.  He appropriates Falcor for his own joyriding, 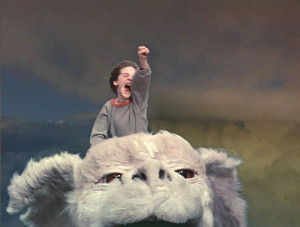 “YEAAAAAAAA-Oooof. Hit myself in the face.”

And flies all around Fantasia waving to everyone from earlier in the film.  Atreyu, Artex (zombie Artex?), the gaggle of weirdos from the beginning who it turns out weren’t central to the story AT ALL, everyone!

And then his next wish is to exact terrifying revenge on the bullies who dumped him in the garbage in the beginning of the movie.  So he flies Falcor directly at them, forcing them into the same dumpster as before, where I assume they died.

And so ends a wonderful movie that I STILL love more than most humans.  We will not speak of the sequel, understand?  Besides, I prefer to remember Jonathan Brandis in his most ground-breaking role – as the cross-dressing soccer star in “Ladybugs”. 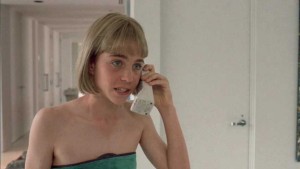 “It’s me again. Put the dolphin on the phone. Of course he knows me, we worked at SeaQuest DSV together.” 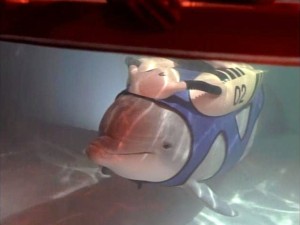 “Tell him I’m not here. Christ, he knew what this was.”