Jingle All The Way

Roll on Christmas season!!  Next up for review is a movie suggested by my good friend Beth: “Jingle All The Way”: 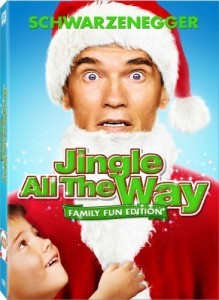 I’m watching the “Snarky Internet Edition”. It comes with a high horse I can watch from and an inflated sense of superiority. 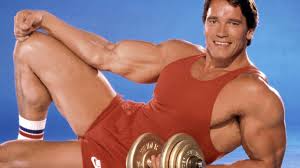 “Before I passed legislation, I worked on my leg-inflation!”  **

Howard is a super busy Minneapolis mattress salesman (how busy can he be though, really?) who just missed his son Jamie’s karate graduation.  Jamie is pissed, and he also doesn’t appreciate his Dad’s attempts to set back all the progress he’s making in class: 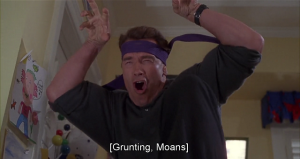 These moves will earn you a Wack Belt.

Jamie, like any good American child, tells his Dad he’ll forgive him if he gets him the season’s most popular toy: a Turbo Man doll.  The same doll that Howard’s wife told him to pick up for Jamie WEEKS AGO, which he totally forgot to do.  Klassik Bonehead Dad move!  So Howard sets out on Christmas Eve morning to get the toy for his son, thereby restoring order to his bland, whitewashed home.

On his way out he runs into his seemingly perfect neighbor Ted, played by actual perfect human Phil Hartman. 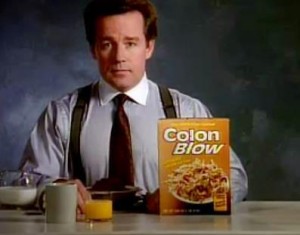 Even a picture this funny just makes me sad now. Why couldn’t it have been Victoria Jackson?!?!

Howard doesn’t have time to be passive-aggressive right now, he’s off to the store to make good on his promise to his son.  While in line, he meets enthusiastic conspiracy theorist/mailman Myron Larabee.  Myron is played by Sinbad, wearing clothes that aren’t multi-colored patchwork mistakes: 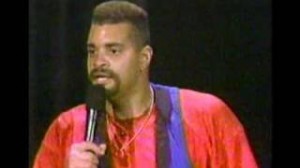 “You ever notice how no one remembers I also had a fade?”

Myron is also trying to get a Turbo Man doll for his son.  Hey!  These guys should work together and maybe they could…..oh.  Oh, I see.  The store is sold out of Turbo Man dolls, and it’s every deadbeat Dad for himself!!  Howard bounces from toy store to toy store in vain, trying to buy his son’s love.

Meanwhile, Ted is creeping into Howard’s house and putting the moves on his wife.  He’s answering Howard’s phone and eating Howard’s cookies and our boy is NOT happy about it.

“Eat my cookies” is code for “bang my maid”.

He runs into Myron again, who suggests they team up to find some Turbo Man dolls, but Howard rebuffs his very loud advances.  They both speed towards the Mall of America, where there’s a rumor that a late shipment of Turbo Mans is being delivered.  The toy store in the mall has devised a barbaric lottery system of colored balls to decide who gets one of the limited number of dolls, and you bet your ass this sets off a hijink-y set piece where Howard and Myron chase a single ball through the largest mall in the US.

But not before Howard takes a load of them right to the face. I AM NOT ABOVE JOKES LIKE THIS.

Howard loses his ball in a little girl’s mouth, and that is a thing that actually happens.  But then he’s approached by a shady mall Santa, played by the Poor Man’s Belushi.  Shady Santa tells Howard he can sell him a Turbo Man on the down low, and takes him to a warehouse staffed with budget Santas and Elves working on knock-off toys.  The Turbo Man he sells Howard falls apart immediately, and this sets off a warehouse-wide rumble that would make Tyler Durden proud. 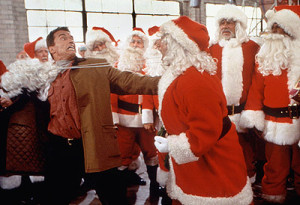 There are an extraordinary amount of midgets working in this warehouse, and this movie taking place in the 90s, they were not spared from the violence.

Howard escapes the great warehouse massacre only to have his car break down on the freeway.  Can’t a guy catch a break?

Meanwhile, Jamie is back at home realizing that his Dad is a stack of empty promises in a camel hair coat.  The Wintertainment Parade (are you serious?) is starting soon, and Dad is nowhere to be seen!  And to make matters worse, he’s best friends with this milk-fed doofus: 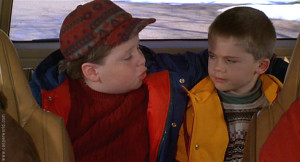 Howard runs into Myron again at a diner, and the two drink booze and commiserate over their familial failures.  While listening to Myron detail how his own emotionally-distant father was the cause of all his problems in life, Howard envisions a bleak future for Jamie, and it’s great: 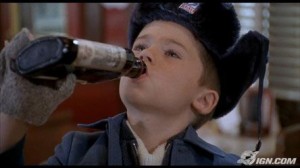 Tip it back, son.  Things only get worse from fractions on.

This is the funniest scene in the whole movie, but I am admittedly a sucker for drunk babies. 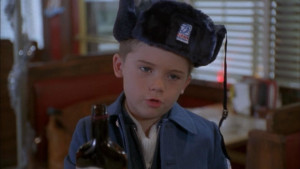 “You know, I work all day, just to keep you in burnt sienna crayons, and I’m catching this attitude?”

Then they overhear a radio contest promising a Turbo Man to the first caller to name all 8 of Santa’s reindeer!  So of course they run to the radio station in person, manhandle the DJ, and make a bomb threat.  Two bomb threats.  The first one is fake, the second one is real, but thankfully it’s one of those cartoon bombs that just blackens the faces of everyone in the vicinity. 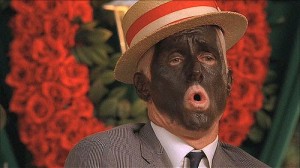 Sterling wasn’t even there, he’s just an asshole.  Roger, no! Not again! It’s Christmas for godssakes!!

Howard finally makes it home, and decides to steal the Turbo Man that Ted bought for his weird ginger son.  He is of course caught red-handed, and his wife is like, “Ugh you are a gross thief who can’t keep your promises and also the ‘mattresses’ you sell are just pillow cases full of fiberglass insulation.  Ted is taking me and Jamie to the parade!!!”

Ted hits on Howard’s wife at the parade, and gets a face full of nog for his trouble.  “Face Full Of Nog” would be a great name for a metal band.  Or a really specific Star Trek fan site.  You know what?  Just put it on my tombstone.  “Erin Conroy: Face Full Of Nog”.

Howard races to the parade to reconcile with his family, and at once gets pulled backstage, dressed in a Turbo Man costume and set atop the Turbo Man float.  Ehhhhhhhh.  Once on the float, he comes face to face with a special edition of this goddamned toy that was the cause of this whole goddamned movie. 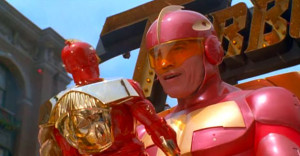 “Say hello to my little friend!  Hey!  You hear me, doll?  Acknowledge my penis!”

Acting as Turbo Man, Howard pulls Jamie onto the float to give him the special edition doll and save Christmas.  But not before Myron, who has commandeered the arch nemesis costume (groanz), hops on the float to fight Howard for it. 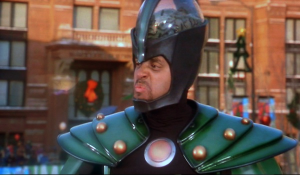 I have to imagine this was the face that won him the role.

They fight, Howard wins, and then rescues a falling Jamie by using the costume’s jet packs. 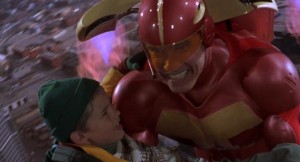 As he places him on the ground safely next to his mother, they both remain laughably oblivious to who it is in the Turbo Man costume.  Even after talking to him for a few minutes.  HE HAS LITERALLY ONE OF THE MOST DISTINCTIVE VOICES OF ALL TIME.  But they couldn’t tell it was him until he removed his see-through visor. 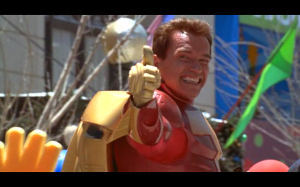 “Oh, see we thought you were one of the other thousands of huge Austrian bodybuilders living in suburban Minnesota.”

Jamie’s heart grows 3 sizes when he sees that his Dad loves him enough to put on spandex and not let him die; and so he gives his special edition Turbo Man doll to Myron.  When a baffled Howard asks him why he would give away the one toy he’s been squawking about for weeks, Jamie tells him he doesn’t need a crummy old doll when he has the REAL Turbo Man at home!!!  Which is the perfect time for his Mom to tell him that she’s filing for divorce. 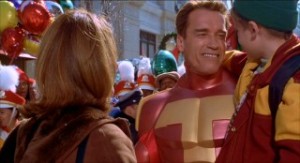 “Give us a minute, Jamie. I need to remind your Mother who keeps this family in beige jackets.”

Which paves the way for the sequel*, “Jingle All The Way 2: All The Way Through Family Court”!  Will struggling single Dad Howard ever be able to balance it all? 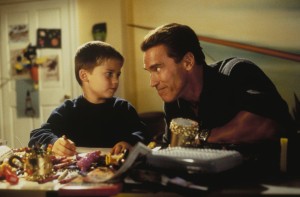 “Hey. That’s a nice macaroni collage you got going there. Can Turbo-Dad borrow 20 bucks?”

Just kidding, the family stays together and Christmas is saved and the only guy going to jail is Sinbad, and it’s like WHAT A SURPRISE.  The End!

* I know there’s already a “Jingle All The Way 2”, and I know it stars Larry the Cable Guy.  I am choosing to exist in a reality where that is not the case, so just get off my cloud, alright?