Have any of you been reading my reviews for a minute?  If so, please go back to my Sharknado 2 review, and look at my last picture.  Just keep that in mind, because…… 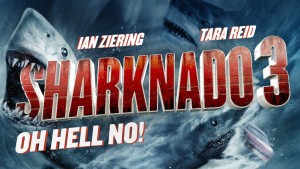 Don’t put my literal reaction into your tagline, dicks.

Sharknado 1 came out, and like a Middle Earth enthusiast, I was just happy people were paying attention to my passion.  And then Sharknado 2 came out, and I was like, “Hey you guys, honestly?  In ‘The Two Towers’, there was way less Tara Reid and like, NO SHARKS.”  What I’m trying to say is, Ann Coulter?  Really?

I shouldn’t have a code when it comes to SyFy original movies, I know.  So maybe I should overlook the glaring product placements and rampant Twitter baiting for this one, and just enjoy the ride, right?  I MEAN, I’LL TRY IF THAT WILL MAKE YOU HAPPY AND PUT ME BACK IN THE WILL, GREAT GAM GAM.

Someone pointed out to me that the Sharknados are doing a reverse trajectory of my life, in that they started in LA, went to NYC and are now in DC.  Those are my literal life chess moves in reverse, and I’d be worried the sharks were watching me except that they forgot that I lived in Dublin for 6 months.  What’s up with that, sharks?  Too scared to go to Ireland? 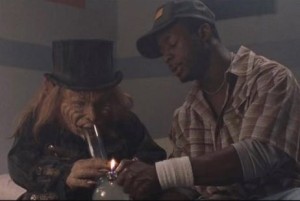 This isn’t about me, though.  Let’s get to the sharks and shit.

I’m worried (genuinely worried!) that this franchise is getting too big for it’s britches.  The movie starts with a 7 minute sequence of our “hero” (the quotes are on purpose) Ian Ziering (Finn.  Stop acting like you knew/cared) running his way to the White House to be awarded a medal from President Cuban. 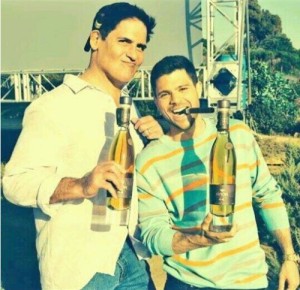 “Four score and seven BEERS ago lololololol Turtle is my Secretary of Fucking Useless Supporting Characters.”

And then a Sharknado hits, OBVIOUSLY.  I MEAN, OBVIOUSLY.  To this movie’s credit, they jammed a butt-ton of action and sharks and catch-phrases into the first 15 minutes.  She-who-shall-not-be-named is playing the Vice President, and they make her look like sentient shark food and not the actual Garbage Pail person she is: 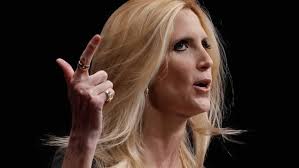 “Legalize gay marriage and BAM!  Sharks falling from the sky. Go on and legalize marijuana – if you don’t mind America’s children turning into super-rats.”  *

There is an insultingly extravagant battle where Maria Menounos and the Hulk and probably also my 5th grade math teacher are eaten by sharks, and I think someone says “This is America, this is PERSONAL!!”.  It might have been President Mark Cuban, the legislative brow-furrower this nation deserves: 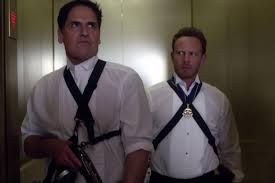 “It lifts and separates and yeah I did poop why are you acting like you’ve never smelled poop?”

Ian Ziering escapes the DC Sharknado massacre and heads South where his family is I guess.  But like, if you see THIS crappening and don’t stop it?: 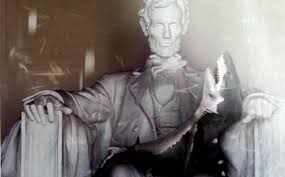 “Abe, tell me again why I can’t *force* someone to make me eggs benedict?”

Then you should probably go to jail, yes?

ANYWAYS, Tara Reid is still in this bitch, and she’s pregnant with Ian Ziering’s baby.  She’s also missing one hand, and it’s occasionally a hook and then a knife or chainsaw whenever it suits, probably mostly some sort of martini shaker. 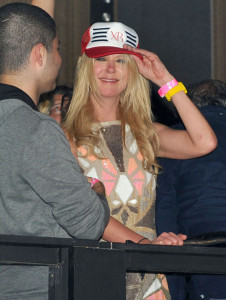 “I thiiiiiiiiink….the baby is in here? In my hat? Do I win?”

There is also a subplot with Ian Ziering and Tara Reid’s daughter who looked like this in the first movie: 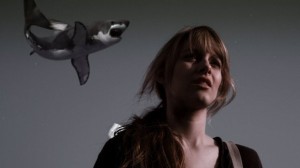 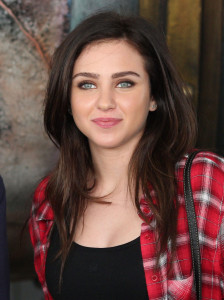 And she’s like, fighting teens at Universal Studios Orlando?  When she SHOULD be fighting the sharks that are falling from the skies.  I think it’s her birthday too.  Fuck her birthday. 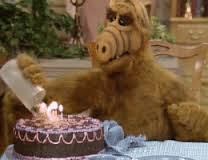 Just an excuse to post a picture of ALF.

But what of Ian Ziering and Tara Reid’s son?  From the first two movies, the one who went to flight school or something?  Seems he’s been left out of this installment, there’s nary a mention of him.  Like someone else we know whose scenes are on the cutting room floor… 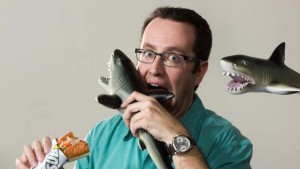 You should hope being double-teamed by sharks is as bad as your life is gonna get, buddy.  ***

Ian Ziering runs into franchise veteran Busty Waitress, who apparently has a human name and it’s Nova.  NOVA. Sure, OK.  But now she wears her bikini top under a jumpsuit, and her traveling companion is Frankie Muniz.  I realize that I’m in an abusive relationship with this franchise because every time I’m like, “Enough!  I’m quitting you, sharks!” I get a 5 minute death scene where Malcolm in the Middle gets every part of his body bitten off and I laff and laff and all is forgiven. 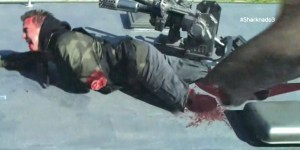 Now you know how we all suffered when you stopped being cute but your show kept going.

Busty Waitress takes Ian Ziering from DC to Orlando where his budget wife and new daughter are straight chilling / running from sky sharks.  The Sharknado has officially been declared a national disaster, because people can get eaten all damn day, but if you fuck with a Universal theme park, the government is getting involved.  Cool.  Fine.  Who cares, when Ian Ziering is meeting with his Dad, DAVID HASSLEHOFF: 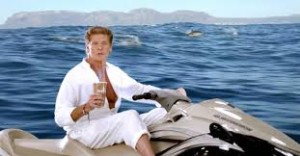 “Oh, me? I’ve just been busy being the fucking greatest.”

The Hoff and Ian Ziering have some unresolved Father/Son issues that are casually alluded to over a stilted meal in the diner the Hoff owns.  Penn and Teller are also in the diner for no reason, and if there’s ever been a more punchable face than that of whichever one is the tall one, I haven’t seen it: 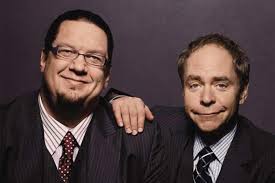 You’ve been magicking around for years, never once thought about making that ponytail disappear?  **

Anyways, turns out Ian Ziering is there to seek the Hoff’s help because he is an astronaut.  David Hasslehoff is an astronaut.  And they need to travel to NASA HQ together and get a rocket above the sharknadoes in space so they can drop bombs on them or something.  OK, so the Hoff and Ian Ziering are flying up in a shuttle to fight the sharks in space-FINALLY, a legitimate plot line.  Let’s go to space!!

There is a magnificent sequence where the Hoff presses the same buttons for 37 hours, while Ian Ziering pours his heart out to him.  Haha!  Feelings.  There’s also a showdown between Busty Waitress and Tara Reid who both love Ian Ziering for some reason, and it results in Tara Reid joining them on the rocketship to space.  Which is MAD LAME, because it was supposed to be BOYZ NITE UP IN SPACE FIGHTING SHARKS LOL!!!

Meanwhile back on Earth people are shooting at the sharks, and Ian Ziering’s boring daughter is there, and her brand new Orlando boyfriend is all:

DO YOU WANT TO DRY HUMP OR WHAT

They shoot a bunch of sharks and then make out, and then he is eaten.  Like RIGHT after kissing her, which will probably give her a complex.  And then she gets saved?  Maybe.  I was doing shots in the mirror instead of paying attention, because she’s the worst.  So maybe she died?

Space space space, sharks sharks sharks.  The most unbelievable sequence yet happens when they reach out to a French astronaut for advice, and he willingly gives it to them.  OK, flying space sharks and President Cuban I can buy, but a FRIENDLY FRENCHMAN?  No sir.  That is a bridge too far.

The Hoff ends up sacrificing himself to turn on the missiles or bombs or whatever in space, leaving Ian Ziering and Tara Reid enough fuel to get back to Earth safely.  They don’t, of course – they end up fighting sharks in space with their trusty chainsaws and nicotine breath, before each being swallowed up by a different shark.  HOFF’S SACRIFICE WAS FOR NOTHING!!!!

“Gonna use this to divide your Western and Eastern ass cheeks, you disappointments!!”

But in keeping with tradition, Ian Ziering busts out the ass of the shark that swallowed him.  *sigh*  And then he pulls open the shark Tara Reid was inside, and PULLS OUT HIS NEWBORN BABY AHAHAHAHAHAHAHAHAHNO NO WAIT WUT.  Then Tara Reid follows.  My GOD, this movie has balls: 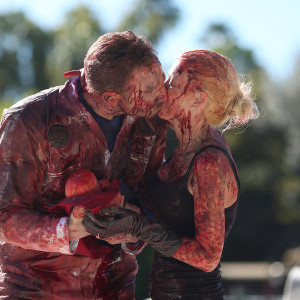 These two can only get aroused when covered in shark guts. See a therapist, you guys!!!

Everyone is safe and happy and then at the last minute it looks like falling space debris is going to crush Tara Reid.  And the movie leaves it as a cliff-hanger for the fourth installment, asking viewers to tweet whether they want her to live or die, and that is just so mean.  No one is going to choose live.  The people who made these movies don’t even really want her to live.

If she lives, I’ll eat my hat.  FULL DISCLOSURE:  My hat is a nacho hat: 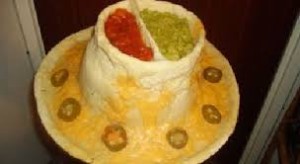 And it is a thing of beauty.