Wish Upon A Christmas

It’s made-for-TV Holiday Movie time, y’all!!  Are you even ready?  Open your mouth, because HERE IT COMES: 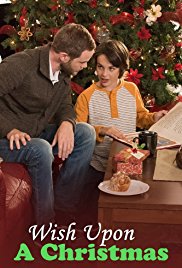 This Lifetime wet fart opens on widowed father Jesse reading “The Night Before Christmas” to his son Danny, and there is just NO CHEMISTRY between these two. Quick! Cut to a flashback of how happy they were back when their wife and mother was still alive!

Sad Dad is sad because he ain’t getting his dick wet anymore.  Danny picks up on this, and decides to ask Santa for a new wife for his Dad. 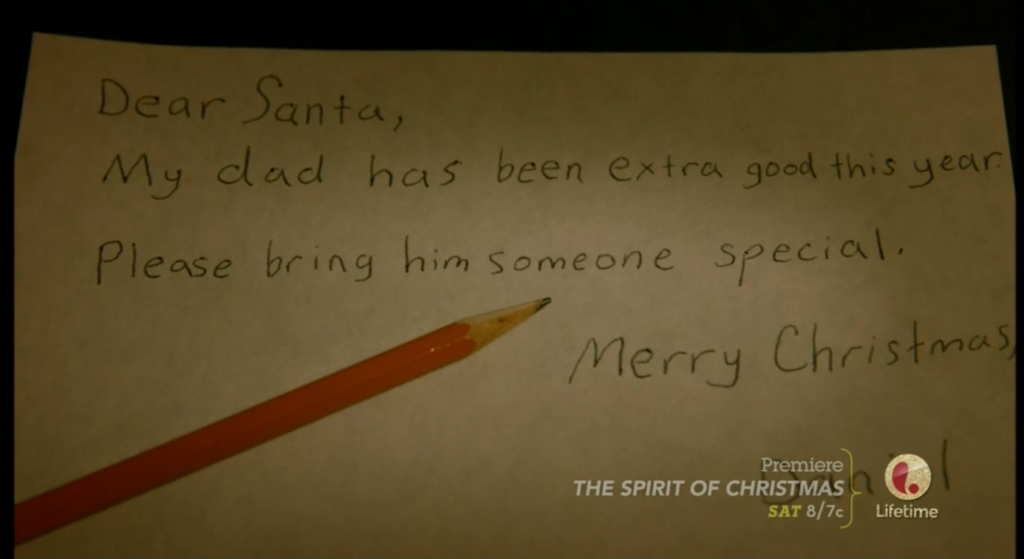 Look at this bullshit penmanship. YOU’RE FAILING HIM AS A FATHER, JESSE.

Oh, I guess women are just PROPERTY to this kid?  #YouToo, Danny?  But then he’s drawn to the window by a bright light in the distance.  There’s been some sort of crash in the woods!  Merry! 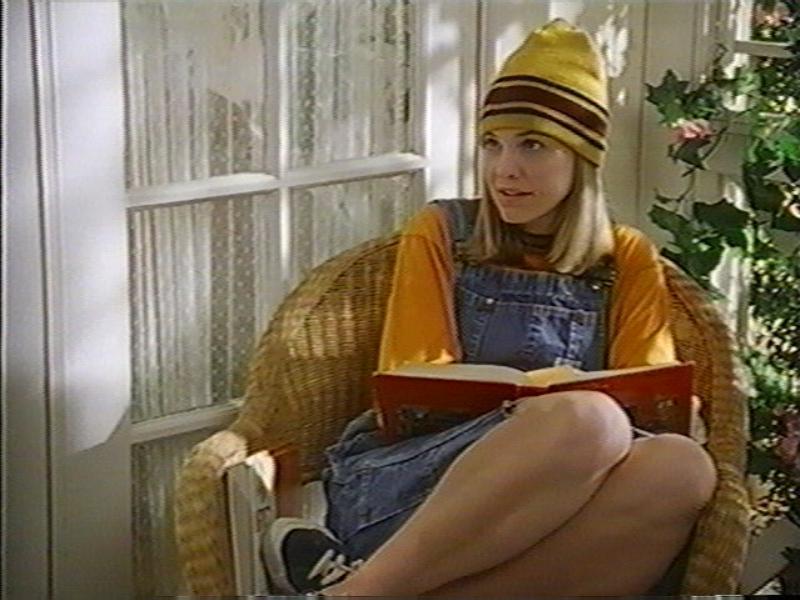 I know! I’m *also* suspicious of whether or not she can survive outside of the 90s.

She’s a “corporate axe man”, a la George Clooney’s character in “Up In The Air”.  (Hey – did you guys like that movie?  Because I think I was supposed to like that movie, but maybe didn’t?)  She travels the country downsizing and taking names. She fires this guy, who def just beefed: 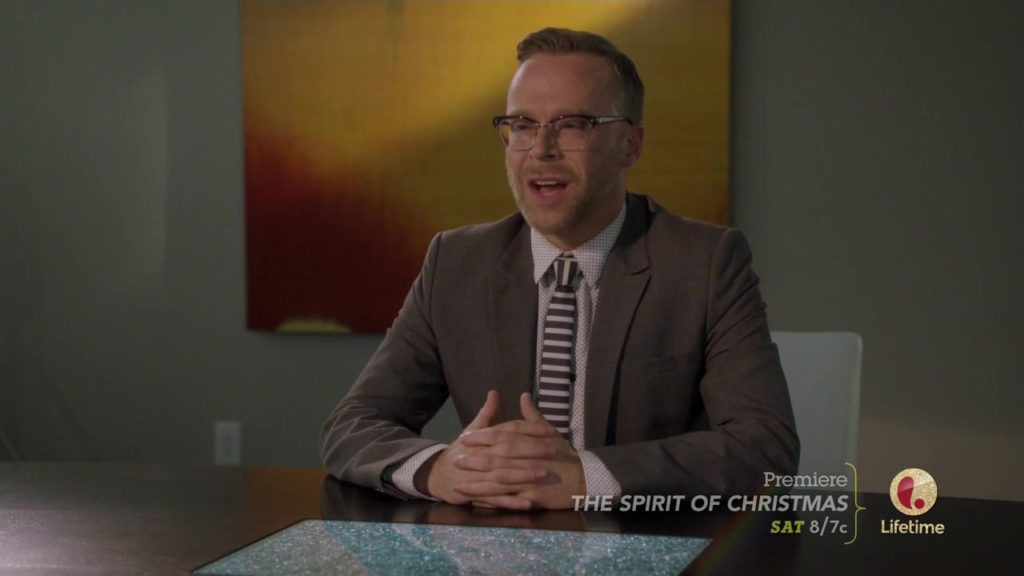 and then goes to a bar to celebrate.  She is in a suit and has her hair up in a fancy bun, so you KNOW she’s a dried-up, hard-up BUSINESS WOMAN like Jennie Garth in Holidaze.  She starts to get wasted and admits to a mall Santa at the bar that she sometimes feels bad about her job. 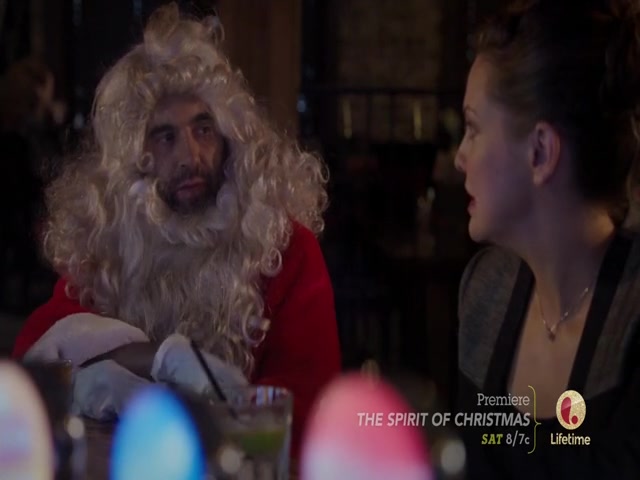 “Lady, I just wanna know how much, and do you take candy canes, and how many candy canes for butt stuff?”

Before she can look too deep inside herself, her boss calls with her next assignment.  Her next job is – GASP – in her hometown!!  A struggling ornament factory!!  The DONNER Toy Factory!!  OK, I’m sure that’s supposed to be a winky reference to one of Santa’s reindeer, but my first thought was, “Oh, like the people who ate each other in the mountains? A little on the nose, eh Lifetime?”

She’s off to ruin some townie lives, but first she calls her father to get some folksy advice.  Her father is Alan Thicke, and he is on the phone in the same room THIS ENTIRE MOVIE: 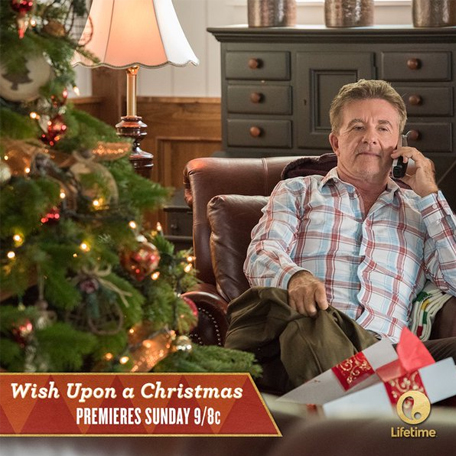 At the ornament factory – every employee is humming Christmas carols while they work – it is the CREEPIEST thing I have ever seen that doesn’t end in a mass Kool-Aid death.  The boss of the factory is none other than Jesse Donner – AMELIA’S HIGH SCHOOL SWEETHEART WHAT WILL SHE DO!!

Meanwhile Danny is obsessed with the crash site from the other night, and no one thinks this is suspicious.  He also just takes a silver necklace he finds on the ground outside of the town diner without asking if anyone lost it, so you know – fuck this kid.  A dapper older man with a trim white beard is asking the police about the very same necklace, and I wonder if he’s actually Santa Claus, WHAT DO YOU GUYS THINK?: 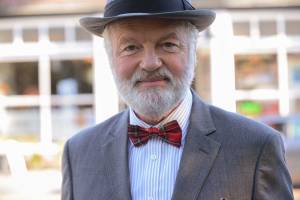 Back at the ornament factory, Amelia is creeping around giving everyone the “you’re redundant” eye.  One of the older  employees named Ben yells at Amelia about her job, and Jesse comforts her with tales of his dead wife.  Then because Jesse is tone-deaf as fuck, he invites Amelia the Actuary to the Holiday Party for the business she’s actively trying to shut down.  She calls Alan Thicke for advice, and I’m 100% sure he just shot all his scenes from his own living room. 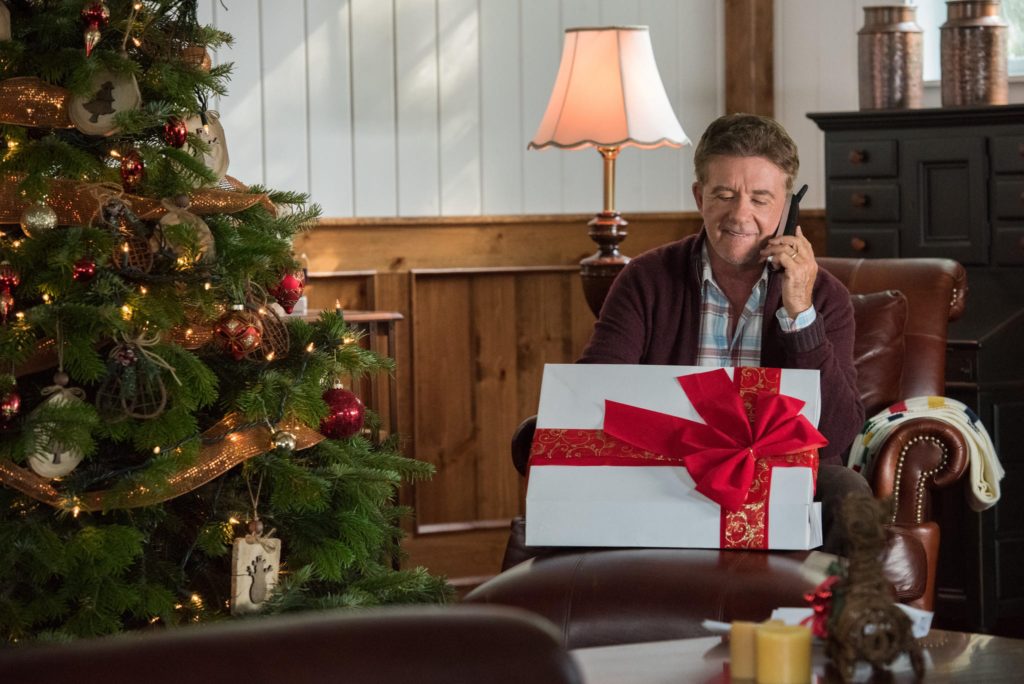 Meanwhile, Jesse’s son Danny has decided that the necklace he basically stole is Santa’s.  I think because he saw it in his copy of “The Night Before Christmas?”.  I was barely paying attention, I hate this kid.

At the Awkward Holiday Party, Jesse tries to woo Amelia while she points out that mistletoe is a sexual harassment suit waiting to happen and tells him Christmas sucks dick. He warms her cold corporate heart by telling her about the story of his Grandfather’s romantic World War II nutcracker, and she makes this face the entire time: 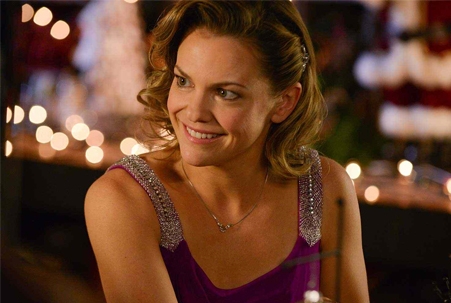 Jesse leaves to do bowtie related bullshit, and Danny swoops in to make a move on his father’s girl. He tells Amelia all about how the necklace he found belongs to Santa who crashed his sleigh in the woods and does she wanna play 7 minutes in heaven?

The employees try to light the Christmas tree, as tradition warrants, but there’s a defective bulb and the tree stays dark. Everyone is VISIBLY upset, until Amelia kick-starts one of their creepy hum-alongs and then everything is fine.  Things are looking up for this shitty ornament factory!  Jesse and Amelia have a dance to celebrate, and the employees start to warm to her. Even Old Ben!  Wasn’t Old Ben a bear? 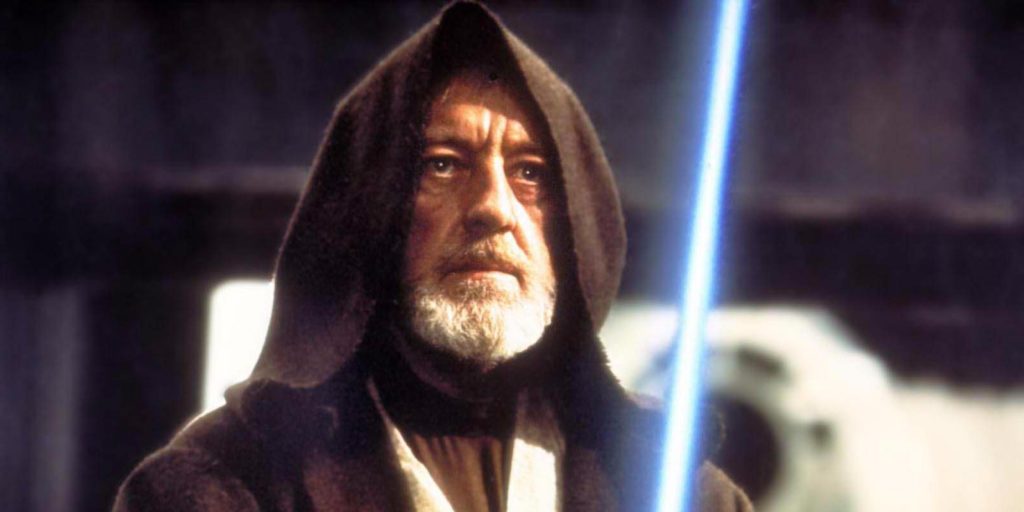 “Call me a bear again, bitch.”

Jesse invites Amelia to stay at his house instead of the fleabag motel she’s at, and my oh my he’s living large for an ORNAMENT FACTORY OWNER.  They enjoy some wine and oatmeal-flavored flirting, while upstairs Danny is doing some CSI shit with a model sleigh at the window trying to figure out the trajectory of the crash.  This kid is twisted.

Jesse gives Amelia a very hint-heavy sculpture of a guardian angel because he knows she’s going to “save the factory!”.  She’s like, “Boy, you so stupid!”  But then she realizes she can’t say no to this face: 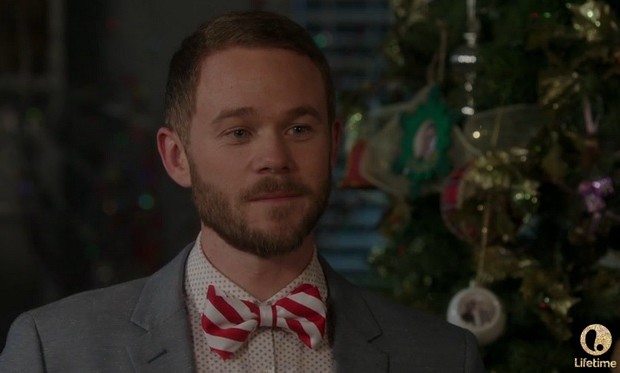 “Panty-dropper, party of one!! Haha, but seriously – have you seen the stolen womans panties I dropped in the punch?”

And so she pulls out some folders and a pen and stays up all night FIGURING IT OUT.  She computes a way to save the factory without firing anyone!  She calls Alan Thicke to celebrate, but he’s all “I LOVE EASY CHAIRS”: 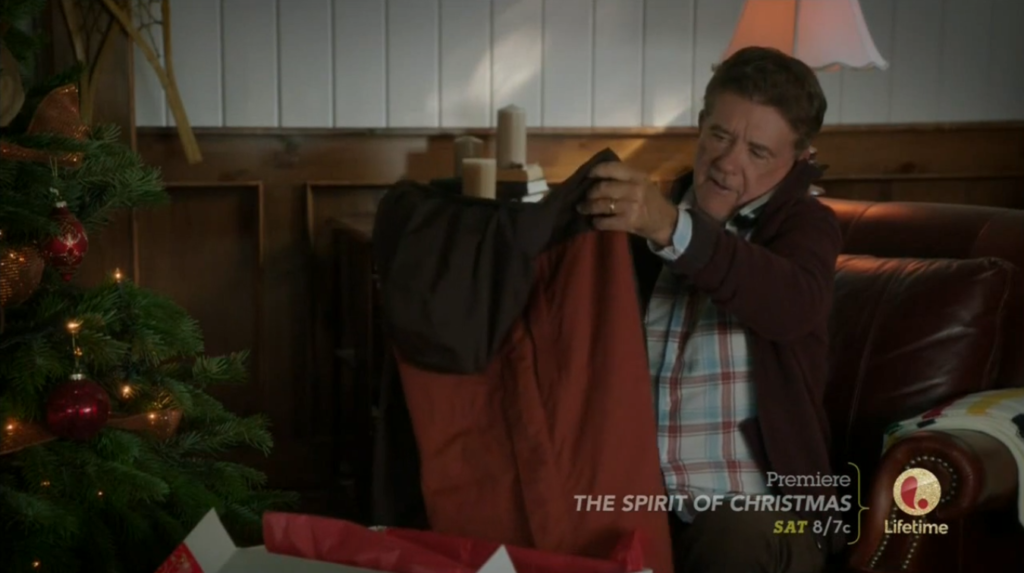 “It’s a nice jacket – did you get my recliner one to match?”

Mens Wearhouse Santa is running all around town looking for his bauble / necklace, but no one has seen it!  But who cares, Amelia has problems of her own! Her serious boss is all, “I don’t care about your amorphous business plan, fire some ornament jerks!  It’s Christmas!”

Jesse talks to Danny about how he would feel if his Dad started chasing some tail that wasn’t his dead Mom, and Danny’s like, “I know *I’d* toss Amelia a fuck!”

Meanwhile, at the toy factory (why isn’t Jesse there?  Isn’t he the boss?) Amelia has seen the career light and starts dropping the axe. First to go is Old Ben, who I’m sure was also the name of a bear. 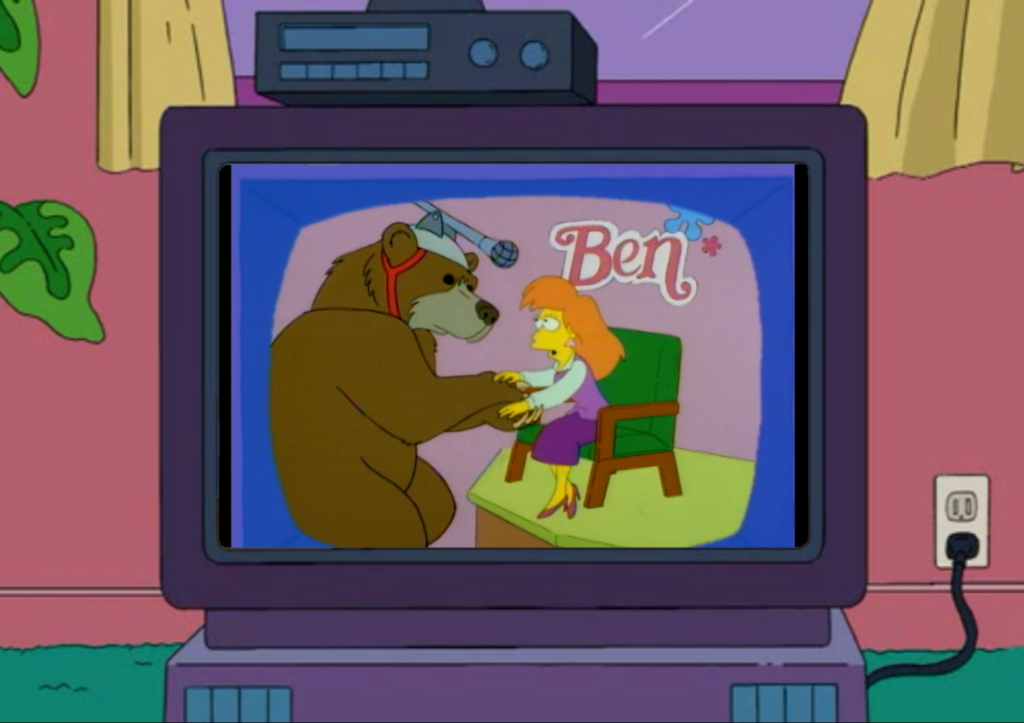 This reference is for Dani.

Jesse finally shows up to try and to stop her firing rampage, with Danny in tow.  Danny offers Amelia a box of donuts in what I assume is a last-ditch attempt to woo her?  No dice, little boy – she’s too busy being conflicted about WORK VS LOVE to notice your unwanted affections.  She shit-cans everyone and then heads out of town!

Amelia runs into Santa Steal-Yo-Girl Claus and tells him she knows where his missing bauble thingy is.  He tells her his name is Mr. Tomte and asks for a ride to Jesse and Danny’s house.  Nice try – we fucking know it’s you, Kringle.  When they get there, Danny can’t find the necklace / bauble suddenly, so the whole town is mobilized to look for it.  Of course Amelia and Jesse are a two-man team searching and squawking at each other.  Just searchin’ and squawkin’!

I am only just noticing how Danny over-enunciates his Ts. “Do you think Mr. TomTe is acTually SanTa?” 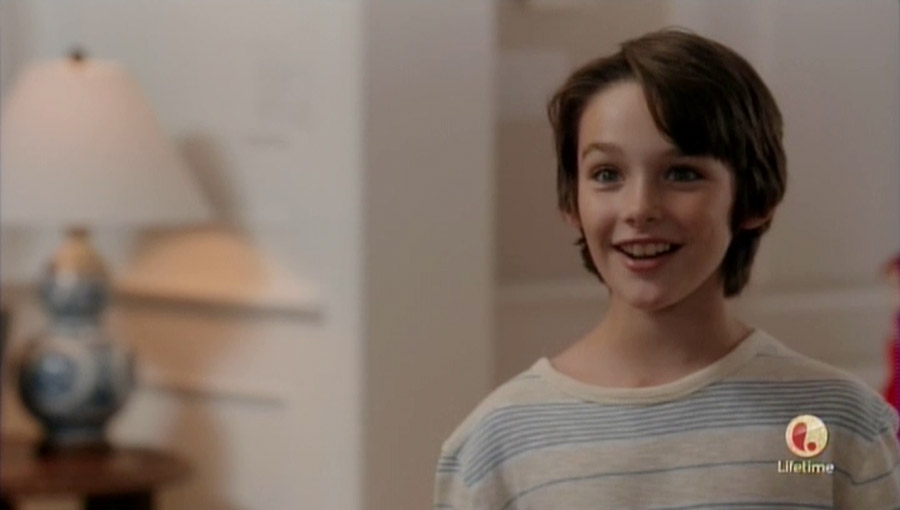 Santa-Who-Def-Fucks ends up at the ornament factory to search for the baublace (necklace + bauble, keep up guys!).  He turns on the broken Christmas tree and then steals Amelia’s folder full of BUSINESS NOTES on how to save the factory without firing any jerks.  Why is this a movie of kleptomaniacs?  It’s a good thing Amelia has decided to get out of this sketchy-ass town and back to her lonely corporate life in DC.  Off she drives – most likely forever.

While she’s on the phone with Alan Thicke again – who is still in his recliner – she sees Old Ben carrying his cardboard box of belongings through the streets, and before she can yell, “I FIRED YOU BUT GOOD” out her car window, he spills the contents of the box all over the ground.  Oh ho, what’s this?  The missing baublace!!  So…Ben’s a thief too?  This. Town. Sucks.

Amelia races back to Jesse’s place to give him and Danny the bauble.  Like, shouldn’t you return that to Santa?  It’s Santa’s. Amelia tells Jesse she WON’T let her boss fire everyone at the ornament factory (do you even have that kind of power?) and they resume blinking at each other meaningfully.  Meanwhile, Danny runs away to the crash site in the woods he’s obsessed with to give Santa his baublace / maybe find out what burning flesh smells like.

Santa Who Kisses Your Mommy With TONGUE is waiting for Danny, and tells him he never even needed the baublace back. He just needed to get Danny alone in the woods (????????) so he could give him his present.

Santa disappears just as Jesse and Amelia show up, and Danny realizes he got the woman-slave gift for his father that he asked for!!!  MEEEEEEEERRY CHRIIIIISTMAS!!!

On Christmas morning, Amelia makes one last call to Alan Thicke.  I love that he definitely filmed all of his scenes in 45 minutes from an Ethan Allen demo living room. 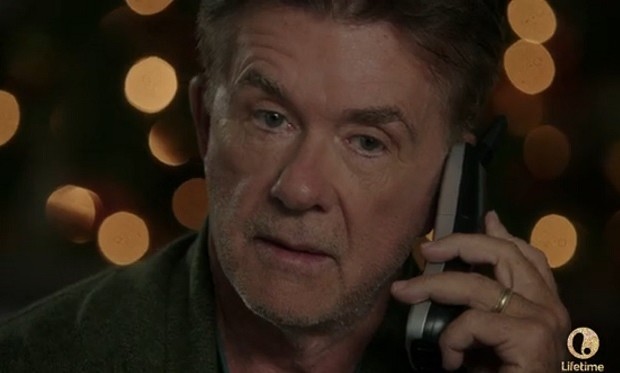 “I have a very particular set of skills. Skills that make me a dream guest star for low-budget Lifetime movies. I will come to the set, and I will sit in a chair. And I will stay in that chair.”

Then Amelia gets a call from her boss saying that Tomte “Santa” Industries is ordering a bajillion ornaments from Jesse’s factory, and so the humming employees are saved!  They kiss, Danny probably steals her diaphragm while she’s not looking, and FADE OUT.