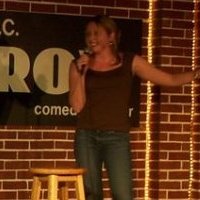 Erin Conroy was born to a goodly and God-fearing American couple in Portland, Oregon.  Raised in a military family, Erin was afforded the luxury of being able to move all over the country, leaving friends and much nicer cul-de-sacs behind before the Conroys finally settled in glamorous Buffalo, NY.

Her time in Buffalo proved invaluable: the freezing winters spent under 6 feet of snow taught her perseverance, the Catholic High School her parents made her attend taught her modesty (and the Apostle’s Creed), and Superbowls XXV through XXVIII taught her never to trust professional sports teams.  We think she learned timing, stage presence and how to be funny from the Buffalo wings.

Erin moved to Washington, DC to study international politics at George Washington University.  Celebrating her success as an administrative assistant with 17 beers one night at an open mic, a friend dared her to get on stage.  The exact exchange that took place that night is the stuff of legend…all anyone is sure of is that there were a lot of slurred words and a voodoo curse.

But the seed had been planted, and Erin took to the stage in June of 2003.  Her self-deprecating humor and ability to think on her feet have made her a favorite at her grandfather’s house in Cleveland, OH; and that bar on 17th street where she has a tab.  She has since moved to NYC to try her luck in the Big Leagues.

Erin has won open mic competitions in NYC (Broadway Comedy Club), DC (DC Improv) and Baltimore (Baltimore Comedy Factory), and had the pleasure of working with Wanda Sykes, Todd Barry, Will Durst and many others

So come on out and enjoy the comedy of Erin Conroy!  Or don’t – you have to live your life for YOU.

If you want to hire me to perform at your comedy club or college, or to write on your sitcom (I assume it’s just that easy), or to make you some sort of macaroni collage, please email me at [email protected]