The People Vs. OJ Simpson – Episode 2

Robert Kardashian is praying for OJ in his bathroom, and I just cannot with this entire character arc.  It’s like the white streak in his hair gets bigger with every scene where they make him look like the Juice’s archangel. 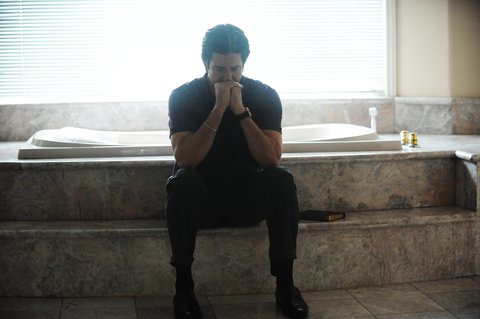 “And also, Jesus? Please remind me which hole in here is where my poops goes. Amen.”

Were they this close?  Was this a veritable nightmare for Kardashian, seeing his best friend fall apart in front of his eyes?  OR, WAS HE A WEIRD DRAMA QUEEN WHO LOVED BEING THIS CLOSE TO THE STORY OF THE CENTURY????  (Using all caps puts emphasis on which theory I think is right, FYI)

Kardashian takes OJ’s “suicide” note to Eyebrows McGee, aka Shapiro, to get his read on it.  Shapiro is flabbergasted: “Jesus Christ, who the hell signs a suicide note with a smiley face?”  If you have to ask these kinds of questions, Eyebrows, then maybe you ain’t man enough for this law game. 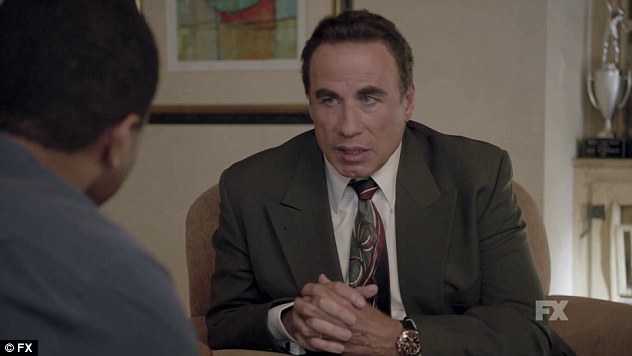 Shaprio also has to contend with a hopping mad District Attorney, who was all, “You said he’d surrender!” And Shapiro is like, “Bro, he was totes gonna surrender, I cannot even with this!” And the DA is like, “Oh, you better START to even!”, and Shapiro is like, *slow meaty fart*.  Verbatim.

BUT OJ IS NOWHERE TO BE FOUND!  The police are getting tips that are VERY 90s: “He’s with Magic Johnson!” “He’s eating dinner with Dionne Warwick at the Ivy!” “He is trying to break into Kevin McAllister’s house!” 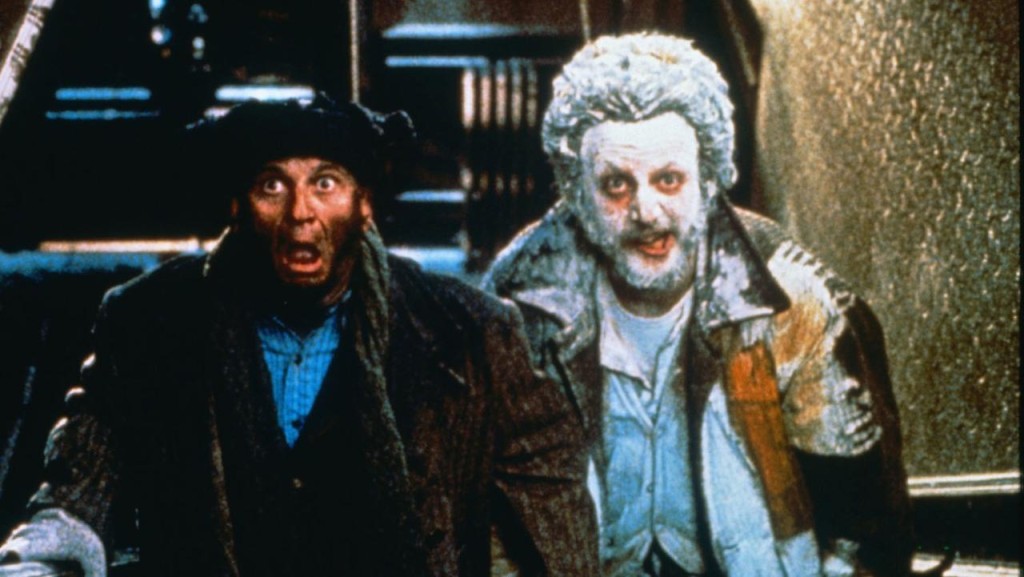 This is what REAL criminal masterminds look like, Juice.

The DA announces that they will get OJ for sure double secret special promise.  Shapiro takes umbrage with that, and throws his own press conference to talk about how great he is, and how OJ running isn’t his fault.  I mean, Shapiro got Menendez back from Israel!  Remember the Menendez Brothers?  The other popular 90s murderers?  Man, we sure obsessed over murderers back then.  It was a simpler time… 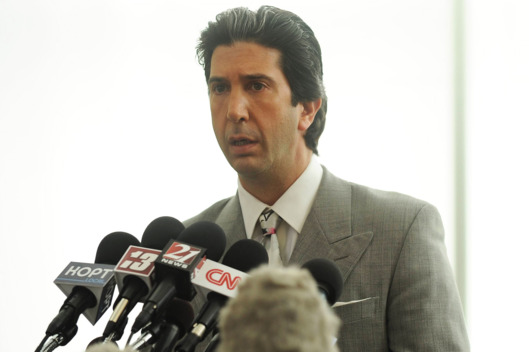 “I was told there would be more robot dicks?”

Back at home, his gaggle of whore-kids clap and chant from their living room, already unfurling their talons in light of potential stardom.  “It beginsssssss…” Khloe whispered, as her yellow reptilian eye blinked once. 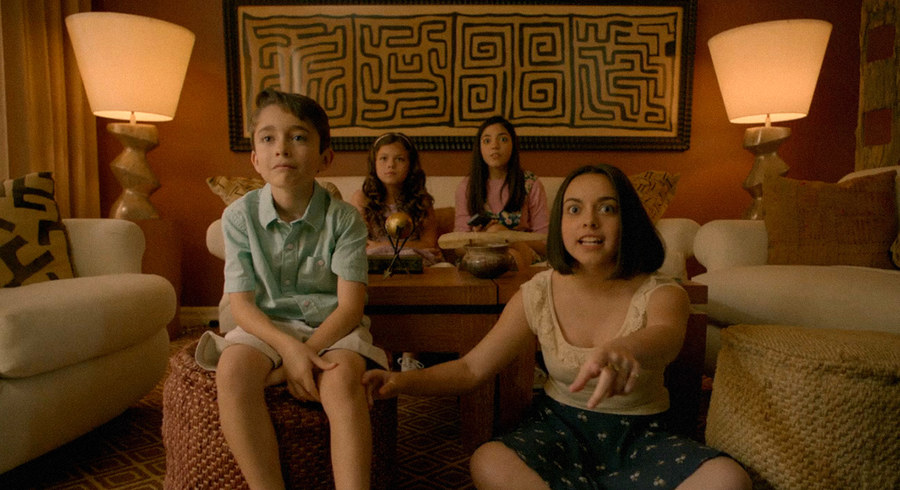 “Can you feel it? The importance of our ass size grows ever stronger!!”

The kids were actually chanting their last name, like they were in a cult.  Which makes sense, I guess – because they operate like one.  For the record: while I am enjoying this show a lot, I am FURIOUS that it has forced me to type the name Kardashian so many times.  Please know Dear Reader, that every time I do, a little piece of my soul breaks off and flies away; I assume to open a kiosk in a mall far away from me.

Anyway, OJ IS RUNNING, Y’ALL!!!  He’s being driven by his boy AC Cowlings, because Theo Huxtable is THERE for his friends!  (Except for Cosby.  Don’t be there for Cosby, Theo)  Cowlings is being honked at by white hippies in vans on the freeway, which is an annoying inconvenience when you’re trying to spirit a murderer away.  The police come and stop the Bronco, and AC is like, “OJ STILL has a gun to his head, because this guy has ONE MOVE.” 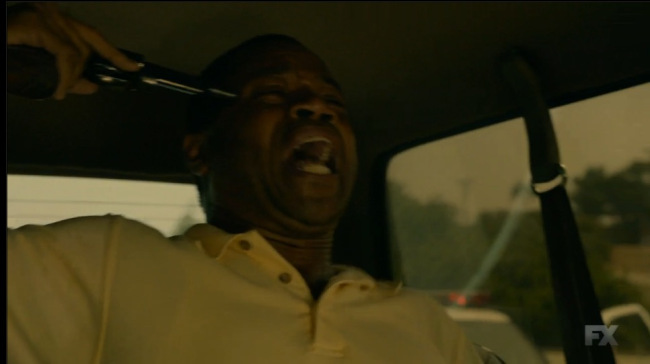 “LAY OFF I NEVER HAD MUCH RANGE AS AN ACTOR!!

Kardashian is crying in his car now – WHO IS RESPONSIBLE FOR EVERY SCENE ROSS IS IN I WANT NAMES?!?! 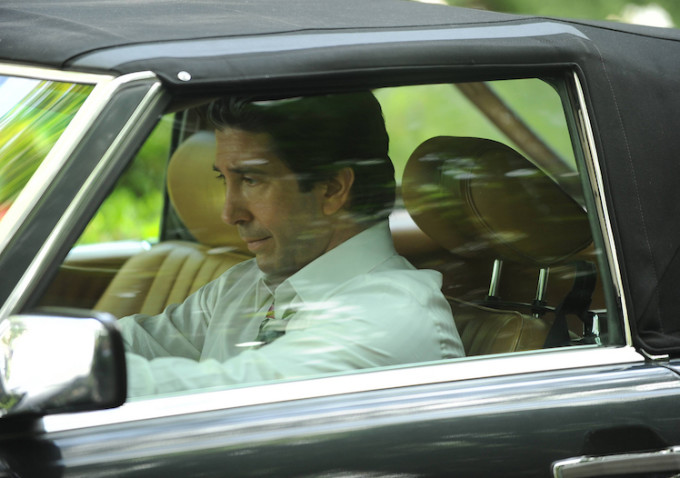 “I don’t know how to change the clock in here, and Daylight Savings done came and went.”

He goes to tell OJ’s family that he’s probably dead, because wouldn’t you want to hear it from a human skunk?: 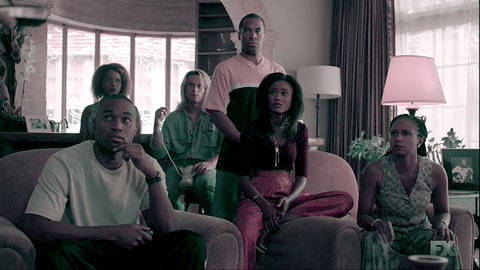 I love that Kato and his magnificent hair is there.  Was he a boarder, or like, OJ’s reverse Webster? Kato fascinates me.  Anyway – oops!  OJ is totally still alive.  This pleases Shapiro immensely, as it means his eyebrows are still in the game.

OJ wants to be taken to his mother.  I have so many questions – are they trying to soften OJ up for this show, or was he being this much of a bitch for real?  They’re just driving back and forth on the freeways that have been shut down to accommodate him.  I.  Would.  Have.  Murdered.  Him.  Myself.

In a random bar in LA, they turn the NBA Finals off the TV to cover the car chase, and all the extras appear concerned for OJ’s well-being, as opposed to blind with rage that their sportballs have been bumped.  I CANNOT SUSPEND DISBELIEF THAT MUCH, I WON’T. BAD TV-MAKING, ASSHOLES.

Johnnie Cochran is watching the chase with his co-workers, and you can bet he’s got half a chub.

“No, I’ll tell you when it’s sexual harassment.  Now bring that sexy shoulder back over here.”

OJ calls Kardashian from the car to tell him he loves him, and this poor man’s Bromance is getting on my last nerve.  OJ keeps crying about wanting to see his Mom, and it’s like – what a baby!  If you can’t stand the heat, then maybe don’t do the murdering.  The police call and mollycoddle him some more too, and it’s so infuriating.  “Hey now, Juice!  We won’t bother you!  Just go ahead and drive home to see your Mom!”

People crowd on freeway overpasses holding signs that say “The Juice Is Loose”, reminding us all of the horrible tragedy of when Starburst had to abandon that ad campaign because of a double murder.  OJ makes it home to Brentwood, crying and whining and threatening to kill himself all the way.

“I also want a McRib, but they’re not available right now. WHY DO ALL THE BAD THINGS HAPPEN TO ME?!?”

OJ agrees to leave the gun in the car and go inside to get arrested.  He asks for a phone to call his Mom, and also for some orange juice.  OJ needs OJ!  There are a million cops standing around like, “Who’s gonna arrest him?  You wanna flip for it?” 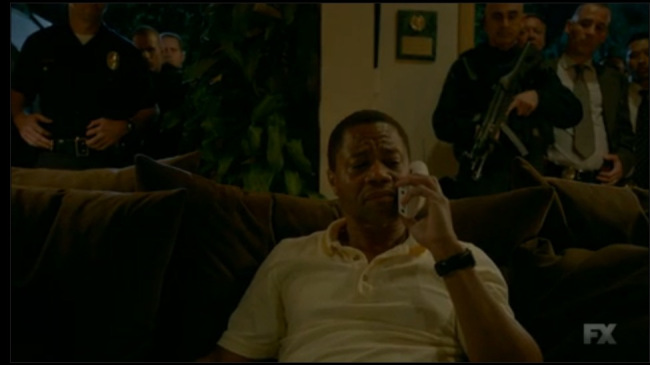 “Can you guys keep it down, I can’t hear the Moviefone.”

Back at the prosecution HQ, Marcia Clark watches the coverage of OJ being arrested and says, “We’re taking him to trial!”, and then takes a WAY TOO LONG satisfied drag off her cigarette that can’t NOT be described as overtly sexual.  Calm down, you didn’t put the cuffs on him yourself, AquaNet.

NEXT WEEK: I dunno, maybe a trial?  The people are gonna be vs. him at some point, or this whole show is a LIE.