Why am I taking movie review suggestions from you guys?  You’re obviously mad at me about something, why else would you suggest movies like “Nell”?  Is this because I left Homecoming early and didn’t tell you?  God, that was like 20 years ago and also I made it up.  Get over it already.

This suggestion comes from my dear friend and super-talented author Lee Goldberg.  He….he’s a real dick.  I’ve never seen this movie, and know very little about it.  Jodie Foster is – a slow island child?  Ugh.  I am already annoyed.  And away we go! 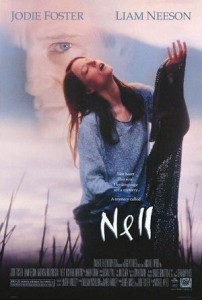 Good God, is she gonna be this emotive all movie? I don’t think I have enough alcohol for this.

OK, there is a weird song being sung over the opening credits, and I am already laughing uncontrollably.  I may have been mistaken – this may prove to be the greatest movie I’ve ever seen.  We see DANIEL FARADAY from “Lost” dropping groceries off at some rando cabin in the woods.  When he goes inside, he finds a dead old lady that someone has rudely covered in flowers.  Someone call Liam Neeson!! 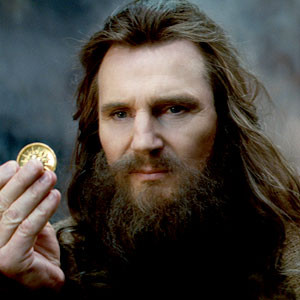 “I will give you this gold doubloon if you stop telling people I was in this movie.”

Fun Liam Neeson facts!!!  1.)  His first movie was “Krull”, which is one of the greatest fantasy movies of all time, and 2.) I met and insulted Liam Neeson once.  I was at a table at the Irish-American Heritage Fund dinner at the Waldorf Astoria, EXCUSE ME VERY MUCH.  Anyways, I drank my dinner and was quite buzzed when I was told we could meet the people on the Board, one of whom was Liam Neeson.  I was so nervous, I shook his hand and then told him that the Star Wars movie he was in sucked, and that he needed a haircut.  He was not impressed.  I don’t know why.

Anyhoo – Dr. Liam Neeson goes to check out the old lady’s body, and comes face-to-face with a feral Jodie Foster/Nell, HIDING IN THE RAFTERS.  Ahahahahahaha.  She seriously is hissing and kicking at him from the ceiling and I am delighted.  This is too much for Dr. Liam, so he calls in weirdo-specialist Dr. Paula.  Sparks flyyyyyyyyy.

They do the smallest bit of research and discover that Nell is the child of her mother’s rape, and that it’s just been her and her mother in the North Carolina woods for years.  And because her Mom had a stroke and spoke funny, Nell speaks in a funny made-up language too.  She also loves to prance around in nature and make faces like she’s having the world’s sweetest and most boring orgasm. 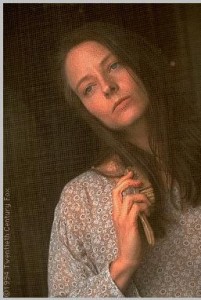 Some terrible judge decides that Liam Neeson and Dr. Paula need to live around Nell for 3 months, before they can decide to give her electroshock therapy or whatever.  They both spend time spying on her and trying to communicate with her.  Liam Neeson seems to make a breakthrough when he says “chickpea” to her, or something similar.  Then Nell runs to the mirror to do some terrible interperative dance: 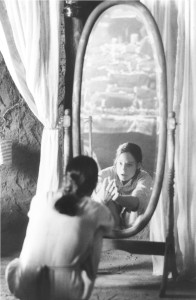 “So, do *you* know where I hid my Vicodin? Because I’m chill, but I could stand to be chiller.”

Holy shit, Jodie Foster is acting her ass off in this movie, and it’s just making me uncomfortable.  Her head is constantly to the side, mouth agape, and she’s really selling this forest savant thing.  Did she make up this language on the spot?  I don’t know how she kept a straight face through filming, though I guess she had practice keeping a straight face during the delivery of the greatest line in cinema history a few years before this: 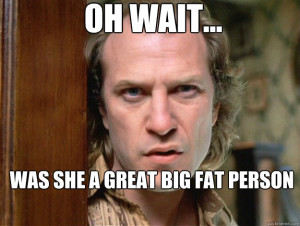 It puts the Oscar in it’s hands…

Nell keeps skinny-dipping in the river and making Liam Neeson feel feelings.  He thinks he’s cracking the code of her nonsense language, and so puts on a Patsy Cline record and makes her go insane.  Good doctoring?  I guess?

Even better doctoring is to go skinny-dipping with Nell.  And so Liam Neeson does just that, WITH DIRE CONSEQUENCES.  Just kidding, everyone has fun!  The next day he lures her out of the house with popcorn, which I think is how the Feds finally got Al Capone, too.  So much progress is being made – she even sings snippets of the Patsy Cline song while spinning and spinning in the wind. 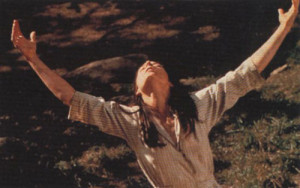 Nell has been flashbacking to memories of two little girls running roughshod all over creation, and it turns out it was her twin sister who died.  And THAT is where the secret stupid language came from – it was twin-speak!  How do we know the other twin is dead?  Let’s ask Nell:

Daniel Faraday has run his mouth all over town and a reporter comes looking for Nell and super spooks her by taking her picture.  Liam Neeson and Dr. Paula have a fight over who is doing the worse job of keeping her safe.  Nell sees them fight and gets upset, and forces them to reconcile by pushing their heads together. 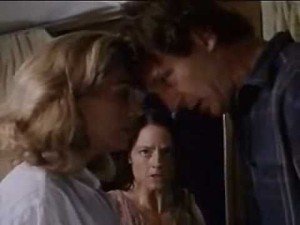 Children of divorce, take note. THIS is how you keep your parents together.

I guess it works, because then all three of them take a Sunday drive into town.  Nell scares a local boy, robs a grocery store and then flashes Daniel Faraday and a bar full of locals.  But she does it with JAZZ HANDS, as is her wont: 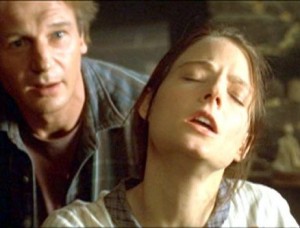 This movie is retarculous.  How did this get made?  Did Jodie Foster have enough money to just steamroll this into theatres?  Because she wasn’t making GUMP MONEY in the 90s or anything. 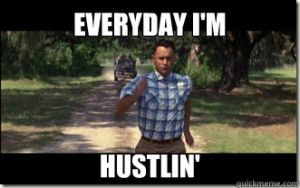 This joke/reference is for about 4 people. You know who you are.

The doctors are in love, and Nell is becoming a local celebrity, what with all the flashing good ol’ boys and whatnot.  But now her humble cabin is a local news hotspot, even more so than a restaurant that also serves cats! 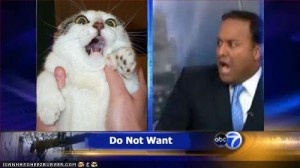 The local news loves cats. Cats, and never telling me how the weather is going to be in my town.

So they have to get Nell out of there.  They take her to a local hospital and she runs into a glass window and while it is meant to be tragic, it is HILARIOUS.  They run tests on her, decide she might be autistic (Reggie Le Duh), and then Liam Neeson is like, “I DON’T WANT HER TO BE SURROUNDED BY MEDICINE AND HELP, WE’RE GOING TO THE DAYS INN!!!!”  And so he takes her to the Days Inn.

There is a LOT of head petting in this movie.  It is off-putting.

Nell has an epiphany while staying at the Days Inn (I mean, yeah – who hasn’t?  Except usually it’s like, “Why am I here, who is that, oh God I owe that loan shark so much money, why am I sleeping on top of an enchilada?” etc), and decides to go catatonic.  So Drs. Liam Neeson and Paula spend a lot of time spooning her on the full-sized bed.  But oh noes!  No more time for day-naps, because the 3 months is up and it’s back to court.

Nell recovers in time to stand up for herself and speak through Dr. Liam Neeson in front of the judge.  And then she turns and addresses the crowd, and you guys – I am DYING LAUGHING.  She is earnestly spouting nonsense to a room full of normies, and Liam Neeson is like, “Ummm, Nell says you guys look good.  Skinny even.  She also thinks ‘Darkwing Duck’ is a superior sitcom, and that all your base are belong to us.”  I mean, it is some of the stupidest shit I’ve ever seen.  But it works, and she is released into the custody of – the moon?  It is not explained.

Fast forward a few years, and the doctors bring their 5-year old daughter to Nell’s birthday party and everyone is just cool with her living on her own now?  I guess if you believe in someone hard enough, then they are the Earth’s problem, and you can just start your own family.  But at least they can all visit and it is beautiful and everything. 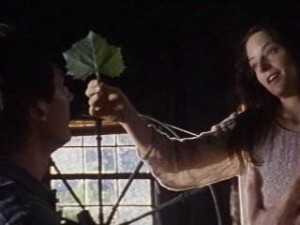 “This leaf is covered in ebola. I’m just gonna wipe it on your face, real quick.”

Ugh.  This movie felt like a mammogram for my brain.  But it’s over now, and I’ll never have to get another mammogram again.  Just like in real life!!