The Halloween That Almost Wasn’t

Christmas isn’t the only holiday season I can ruin with reviews of cheesedick made-for-TV movies!  Halloween is only a few days away, and so it’s time to treat you all to a review of a timeless classic: 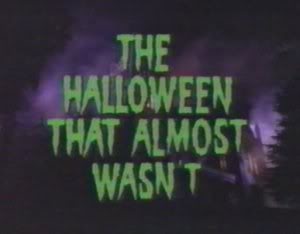 Look at that creepy writing. That’s how you know you’re in for some Fear Street-level chills.

That is this movie’s original title, and the one I choose to refer to it as.  Later on it was changed to “The Night Dracula Saved The World”; which is a stupid title for jerks, and was also accompanied by some truly unsettling VHS cover art: 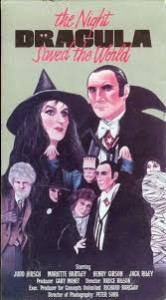 Is this the World’s Worst Harlequin Romance novel?

This movie was made before I was even born, which makes sense – since it feels like I’ve always been watching it.  It was as much a Halloween tradition among my siblings and I as chucking the Necco Wafers we’d get trick-or-treating right back at the Necco Wafer-giver’s house was.  Come on, cheapskate.  You know we’re here for Snickers bars. 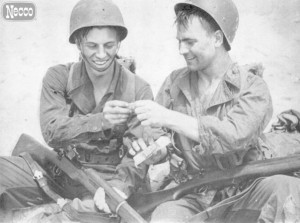 Necco Wafers were sent in care packages to soldiers in WWII. I assume they killed Krauts by making them eat entire rolls. My movie reviews are educational as fuck.

Re-watching this movie now as an adult is an exercise in whispering, “Oh my God, so stupid” every couple of minutes; but doing so with a goofy smile on my face.  So let’s gooooooo!!!:

The movie opens on the night before Halloween, and we see Igor sitting in Dracula’s Castle, eating popcorn and watching the news.  Dracula wakes up and joins him just in time to hear the newscaster announce that a rumor is circulating that Dracula has called all the monsters in the world to his house to discuss possibly cancelling Halloween (!!!!!).  Also – Dracula is played by Judd Hirsch, and storied TV and movie career be damned, THIS MOVIE is what I always think of when I hear his name. 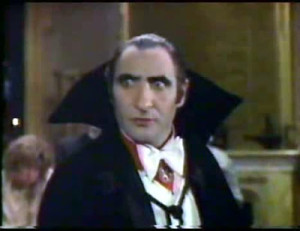 We also see a boring-ass family of 4 watching the same newscast, and offering up some wooden exposition and background on Halloween.

Mom: Do you know why the first people to celebrate Halloween dressed up in costume?
Little Girl: Because it was fun!
Mom: No!  For protection. They believed if they dressed like an evil spirit, the real spirits would leave them alone!
Erin (age 11): That’s so interesting!
Erin (age 34): Fuckin’ know-it-all.  No one even asked you.  Did YOU know that Valentine’s Day was created by the card companies?  And that the ingredients in my Famous Vodka Sodas are just vodka plus EXTRA VODKA?!? 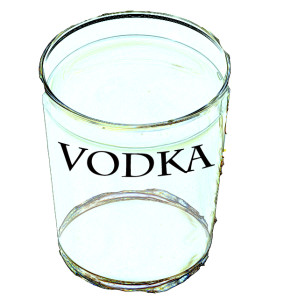 Dracula.  Is.  Furious.  He didn’t start this Halloween rumor, so WHO DID?!?!  No time for your crazy conspiracy theories about the Illuminati, the monsters are arriving at the castle for this bullshit meeting.  One by one, Igor announces their entrances like this is the freaking NBA All-Star game.  There’s the Wolfman, who comes in dressed in a nice suit and with all the calm composure of Woody Allen. 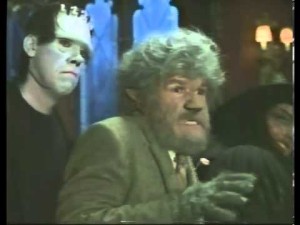 “We should be able to appreciate his art without having to demonize him! I’m not an apologist! I WROTE THAT FACEBOOK RANT FOR ME!!”

Then there’s Frankenstein’s monster, who marches in all stiff-legged, but then breaks into an impressive soft-shoe routine.  What a fake-out!!  You’re never too young to learn not to judge based on first impressions, children.  Even you fat, friendless children.  It gets better!  (Not for many years, though 🙁 ) 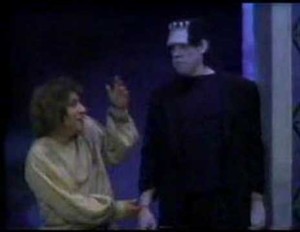 Rounding out the monster crew are The Mummy, a Zombie and the Witch.  We can already see that the Witch is gonna be trouble, because she brushes right past Igor and his Jock Jams announcement of her arrival without even acknowledging him.  Maybe this Hag is on the Rag!!  (I’m sorry)

Dracula gives a shitty pep talk to all the monsters about how they better shape up and be more frightening, or they will get replaced with something SCARIER.  This movie taking place when it did, I’m assuming that “something scarier” would be AIDS.  AIDS or Russian spies.  Regardless, the Witch doesn’t even GIVE AN EFF, and demands to be replaced NOW.  She’s tired of being scary, because it makes her unlovable, and every chick really just wants to be loved, yo. 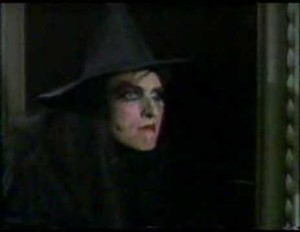 She just wants *one* Tinder conversation that doesn’t end with a dick pic.

She’s the one that started the “No More Halloween” rumor, and is refusing to fly her broomstick across the moon.  The monsters are in bits – because everyone knows that Halloween can’t officially begin without the Witch’s World-Famous Broom Ride Across The Moon!!  (No one knows this, because it has never been a thing EVER)  The Witch has the upper hand, and says she’ll continue to take part in this monster mash IF all her demands are met.  The demands range from reasonable (more respect, percentage of t-shirt sales) to “you trippin'” (disco dancing!!!).  Dracula refuses, and the Witch is like, “PEACE!” and disappears.  Dracula tries to go after her, but the sun is rising, and so he vows to go after her again the next night, which is…

HALLOWEEN NIGHT!!!  The gang tracks the Witch down at her house of all places, and makes a few hijinky attempts to get through her bedroom door.  It’s your typical slap-sticky nonsense, the highlight being when Dracula shrinks down into a teeny tiny bat and slips under her door, giving her the opportunity to bash him with a broom.  The special effects in this movie are wonderful/awful throughout, but there’s something supremely charming about seeing a Dollar Store bat being dragged along on a string for 2 minutes while dubbed with a terrible Transylvanian accent pleading, “No!  Staaaahp!  Vat are you doiiiiing?”  At one point, the Witch also makes a painting of the 3 Musketeers come to life and attack the monsters, and Dracula and Igor are just like, “LOL WUT?” 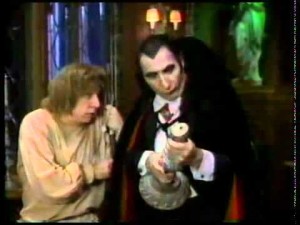 Meanwhile the boring family has been carefully following the news report about Halloween being cancelled, I guess because they only have like, 3 channels on their TV. 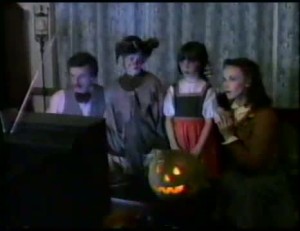 “Does anyone know how to turn this thing on???”

They have also been putting costumes on for about 36 hours now, which is too much time to spend getting ready for Halloween.  It should take you 6 minutes TOPS to put your costume on, the rest of the prep time being devoted to drinking as much as necessary to get you to that good drunk place where you can fake interest in other people’s costume origin stories. 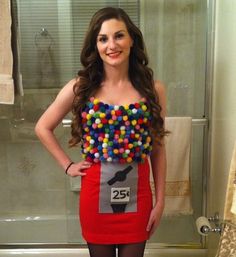 “Yeah, it’s actually in honor of my Grandmother. She died before I met her, but I bet she would have really loved gum, you know? Hey – do you know if Tommy is here yet?”

Back at the Witch’s house, Dracula has decided to give in to her demands.  He dramatically agrees to give her half the monster-ruling powers, and take her disco dancing.  Yay!  She has everything she could ever want!  So would she PLEASE just ride her broom across the moon now, so we can all get to eating fun-sized candies and puking orange?

NO.  She STILL doesn’t want to do it.  Once again, the Witch bemoans being universally feared/hated/considered not good looking.  She wants out the Game, Avon.  Just when it seems like all hope is lost, the family of four inexplicably shows up outside the Witch’s door, and begins pleading with her to fly over the moon.  When the Witch sees that the little girl is dressed as a – *gasp* A WITCH – she is so moved that she does a complete 180 and agrees to kick-start Halloween.  For the CHILDREN.  But also for the list of demands Dracula promised her.  Girlfriend is still gonna collect!!!

The Witch flies across the moon, Halloween is saved, and the pathetic group of monsters gets to keep their shoddy union intact for a few more years.

The movie ends with Dracula taking the Witch disco dancing, and a warm feeling spreading through your cold dead heart.  That’s old school Halloween merriment, chump!  And there’s no escaping it!!!  Until Saturday morning, anyways.  Your hangover will erase all good thoughts verily and with gusto.
HAPPY HALLOWEEN!! 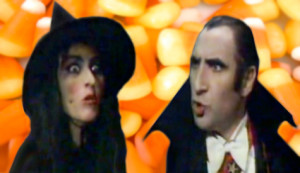