This movie comes recommended from my hilarious friend Alan, and was described as “lurid” and a “cult classic” when I looked it up, so HERE WE GO:

The movie begins by introducing us to Lace, the leader of the Dagger Debs – a 1970s lady gang that runs in tandem with the Dagger Diamonds.  They’re like brother/sister schools, but with way more pillowcases full of doorknobs.  LADIES BE GANGIN’, yo!  Lace has a fun, and fancy-free style: 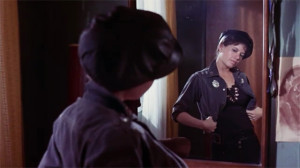 As evidenced by how she deals with one of her gang members’ requests for fries at the local burger joint: 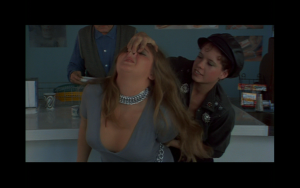 “I TOLD YOU WE WERE ALL GOING PALEO”

It’s at this same burger joint that the Debs run across “New Girl In Town” Maggie.  There are some words exchanged over who should sit where, and then Maggie goes all Taken 3 on Lace’s second-in-command Patch:

Here’s pepper in your eye!  Your other eye.  The eye not covered with the patch.  You know which eye I mean.

In case you missed it – this is how Maggie dresses to get a cola at the local greasy spoon: 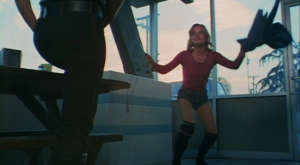 Lame top, yo.  Where you going, Bible Study?

All the girls are arrested and sent to Juvie, Maggie included.  It takes approximately 12 seconds for the corrections officers to try and rape Maggie, at which point the Debs step in and save her. The fight is hilarious:

These weak-ass punches cause enough friction to wrench some of the girls’ prison smocks open, because if you thought you weren’t gonna see bewbs in this movie, you were very wrong.

Maggie is saved!  She’s released first, and tasked with taking a note to Lace’s scumbag boyfriend Dominic.  Dominic is the President of the Diamond Daggers.  You guys.  He’s *President* of his gang.

Moving on – directly to a sidebar: The acting in this movie is so bad it’s almost good.  Lace has the uncanny ability to speak all her lines without opening her mouth, every other actor is yelling, and don’t even get me started on Patch.  (Patch is amazing – I don’t even need to check if she won all the Oscars, because I know she did)  There are lines like:

“YEAH, RIGHT IN HIS MARBLES”

Anyhoodles, Maggie finds Dominic and hands off Lace’s letter.  Dominic looks like this, by the way: 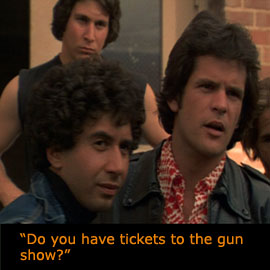 Wondering which one he is? Stop changing the subject. We need to see your gun show tickets.

Maggie finds cause to literally slap Dominic in the face, which he takes as a sign to burst into her house later that evening and sexually assault her.  Her words say no, but her body says yes, and then her words also say yes?  Then she and Dominic are basically all whispers in the secret gang warehouse about how they’ll totally go steady as soon as Lace is out of the picture.  Lace trusted you with a letter, Maggie!  And this is how you thank her?  Patch – ever watchful, even with one eye – notices!

Patch runs to warn Lace of Maggie and Dominic’s impending back-stabbery, and also to have a nice sit-in, because it’s been a long week: 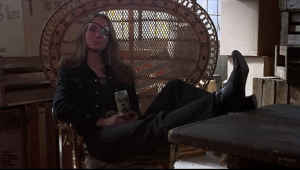 “Wicker chairs and Coors tall-boys and also your boyfriend is putting it in someone else. WHY ARE YOU GETTING MAD AT ME, THO?”

Lace insists that she trusts Maggie completely, and then shows it by holding her too tight in front of the whole gang and suggesting she prove herself.  But how?  By stealing their rival drug dealer’s (oh yeah, they deal drugs) favored medallion, that’s how.

So off Maggie goes to the rival drug dealer’s….campaign headquarters?  He must be running for Clown Comptroller or something, because he’s dressed like this: 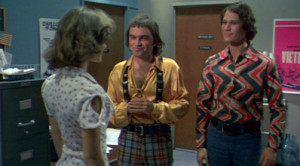 His unibrow is running for Vice-Comptroller

Another sidebar: Maggie is in a dress.  This is news because this is the first time any of the main characters has been in new clothes.  I mean it.  I think they filmed this movie in one afternoon in Bakersfield, when all the locals were sleeping off their noon drunkens.  I used to live in Bakersfield, I’m allowed to speculate wildly.

Maggie bites Clowny McGee’s dick (yes), and steals the medallion.  And THEN, she picks up a chair, and uses it to BREAK A HOLE IN THE WALL AND ESCAPE.  Here is the scene, please just watch it, I cannot even with this:

Maggie runs back to show the Debs and the Daggers the medallion – she’s a hero!  But rut-roh, Clowny shoots Dominic’s brother in retaliation.  (At school.  Everyone in this movie is still in high school.  It’s important you know that.)  Well now it is straight ON, and the D&Ds want revenge!  Maggie suggests they jump Clowny’s crew that Friday night at the roller rink.  Of course!  The roller rink has always been host to massacres, especially if we’re counting my 3rd, 5th and 6th grade birthday parties.

In the meantime, Lace tries to reconnect with Dominic, and win his affections back from Maggie.  She tells him she’s pregnant, a last-ditch attempt to save the relationship that works 99% of the time.  Unfortunately for Lace, this is the other 1% of the time, and Dominic is like, “Naw – no baby.  Also I hate you.”  Lace drops some HEAVY foreshadowing by telling him if he leaves her, something terrible will happen, and then glancing at Clowny’s medallion.  Dominic leaves anyways, and I wonder if there’s going to be an ambush at the roller rink.

Fast forward to Friday night, and there’s an AMBUSH AT THE ROLLER RINK.  When the Daggers and Debs try to make their move on Clowny’s crew, they’re shot up instead. 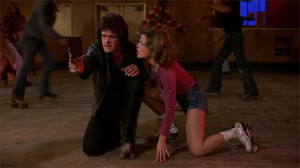 “Is this a good time to ask you about when you and I are gonna go out?”

Dominic is shot.  To death!!  And Clowny himself kicks the baby out of Lace.  The gang is in shambles!  With Dominic dead and Lace in the hospital, Maggie takes over as head of the gang.  The rest of the Daggers jump ship because they won’t follow a lady, not even Elizabeth Warren which is insane that woman is America’s saving grace.  Maggie renames the Debs the Jezebels (“I found it in the dictionary!”) and enlists the help of the local Lady Black Panther chapter (OK?) to take on Clowny.

The Jezebels are armed and ready to take on Clowny’s crew, and Lace is out of the hospital just in time to join!  Maggie tells her that they should try and take Clowny alive, so they can find out who ratted them out at the roller rink.  Lace is nervous. 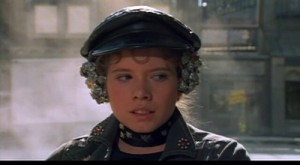 Patch and Lace kill Clowny before he can tell any secrets, and the Jezebels win the gang war.  Back at the warehouse, they celebrate with a cake.  Klassic Lady Gang shit, just eating cake and having periods.  Patch and Lace try to stage a coup, framing Maggie for the ambush so Lace can reclaim control, but the gang is hip to her shit now.  Even Donut!

This chick’s name was Donut. How did I miss that all movie?

Time for the final stand-off between Lace and Maggie.  There’s some weak knife-play, and then the weirdest DeBeers commercial you ever saw: 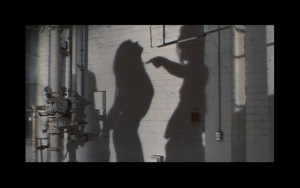 “This Christmas, put the diamond pendant right where the knife goes.”

Lace is dead!  Long live Maggie, Queen of the Jezebels!!  Well, long live in jail, because the cops finally show up and arrest everyone except for Patch, who is such a pariah now the gang won’t even let her go to JAIL with them.  Poor Patch. 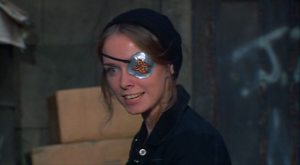 “Like I care, I have a boyfriend in Canada with THREE EYES and together we’re perfect and so I don’t need any of you!!!”

And that’s it!  What a strange and wonderful trip that was, and one rife with important moral lessons.  Like, don’t throw your whole life and gang leadership away on your high school boyfriend.  And maybe don’t take all your advice from a woman with one eye, as she’s obviously made some mistakes in life.  But most importantly, always remember: 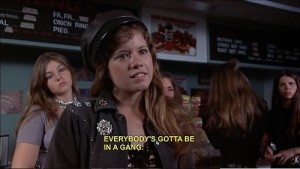 Words to live by. Except – you’re dead, bitch. I ain’t gotta do anything you say.