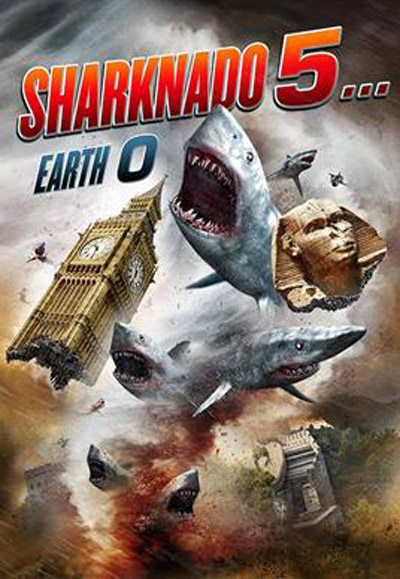 As a lazy made-for-TV movie reviewer, I believe in transparency and the importance of being honest with my reader(s).  I watched this movie months ago, on a boozy Sunday afternoon.  I will not watch it again – this franchise has jumped the shark (I’M GROUNDING MYSELF) and any fun to be had in terrible special effects and dialogue is ruined by a parade of unnecessary guest “stars”.  So instead, I’ve decided to just write out the notes I took while watching it back in August.  Interspersed with some dumb photos, I hope it’ll create a rough picture of this abomination / how drunk I was when I watched it.  ENJOY!!!

Fin flies off to meet up with Nova because he must have gone to flight school with his son from movie #1.

Gil’s accent is pissing me off.  Chris Kattan’s British accent is worse. 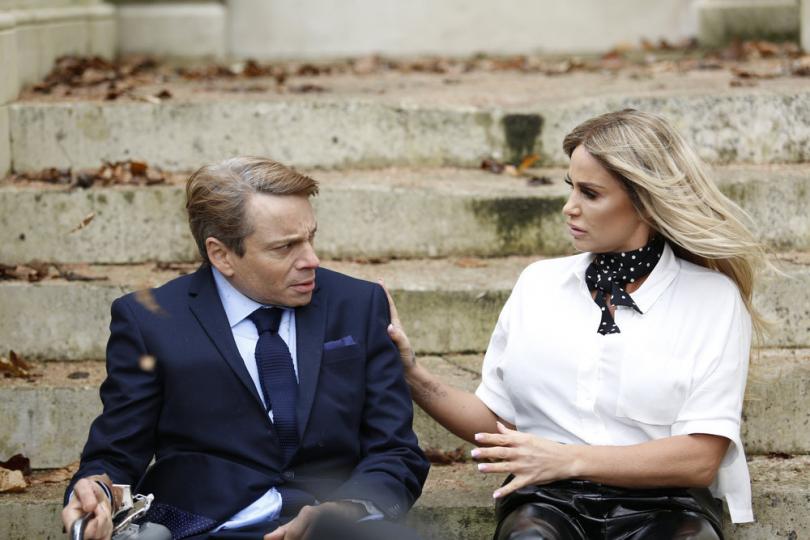 “Are you insinuating I’m not believable as the Prime Minister of England? I was MANGO, for Godssakes!” 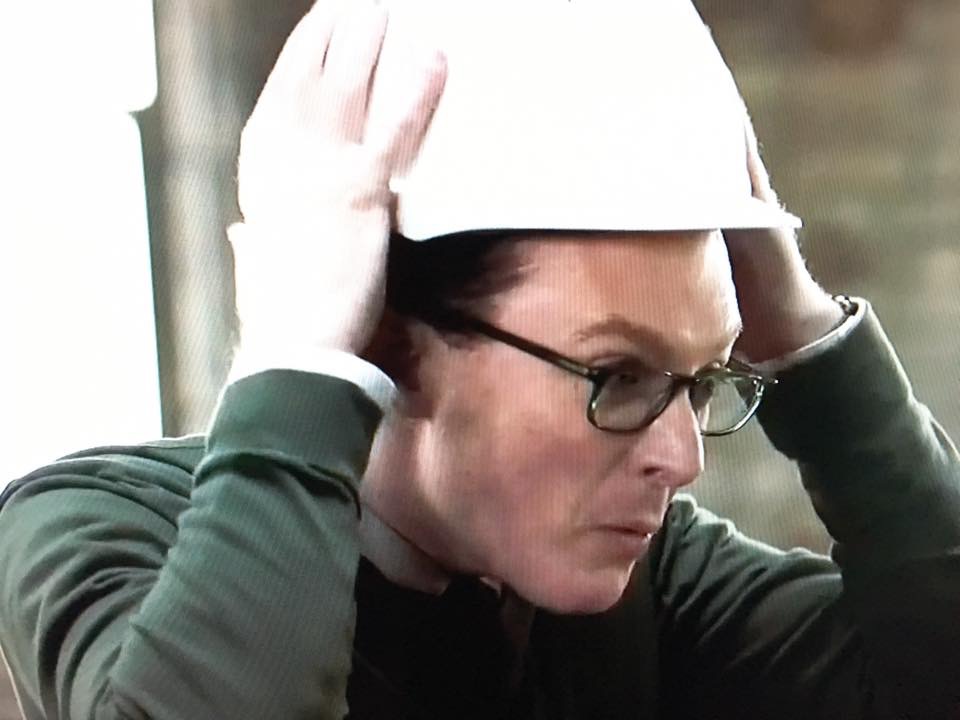 “Here in the lab we’ve created a ray that helps you deflect uncomfortable questions about your sexuality, so people will focus on your music!”

Meanwhile Fin and Nova are in a cave somewhere looking at drawings that I guess are explaining the mythological origins of Sharknados?  They look like Fin’s sociopath of a son drew them, but more importantly, fuck Nova for wearing this fedora. 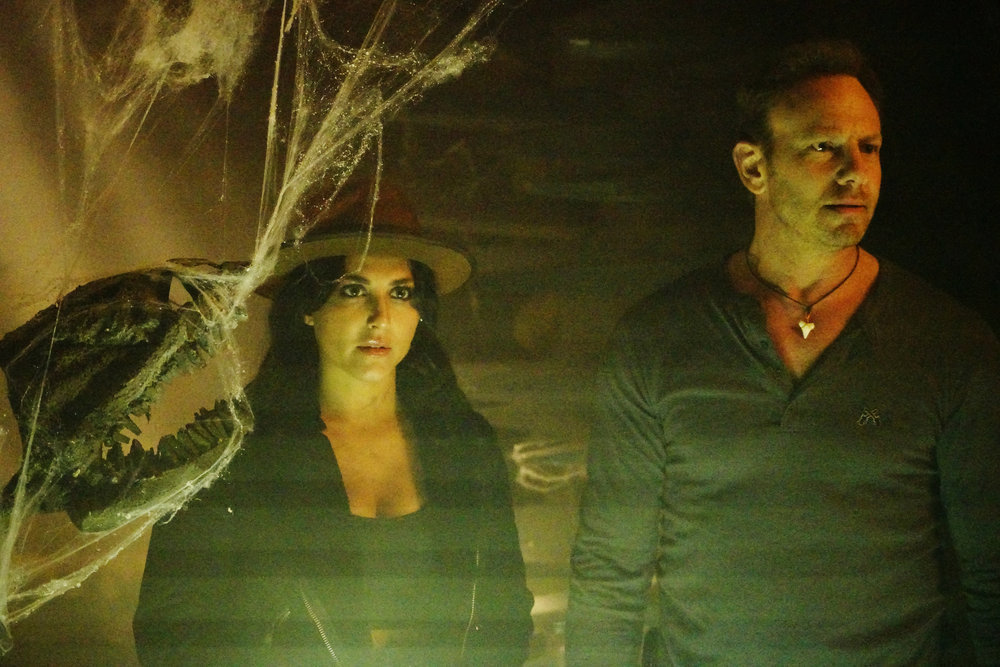 More like Indiana BONES, amirite? Because her tits are on parade.

They discover some proof of a “Shark God” and a shark sensor made of rock that vibrates when sharks are around or when your table is ready at the Olive Garden.

Then a sharknado hits London, and it’s like FINALLY. April puts Gil in a very safe stairwell and goes outside to throw some helicopters around.  Gil is wearing this dumb helmet: 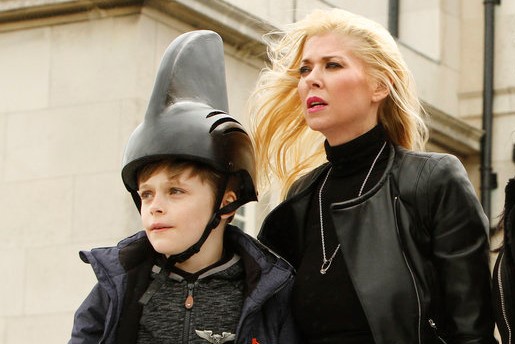 And actually yells “The sharks think I’m one of them!” before getting sucked up into a sharknado.  Let’s hope he dies up there!

Chris Kattan gets killed, which is too bad for him because that means he doesn’t get to see Fin riding / punching a shark down the stairs. 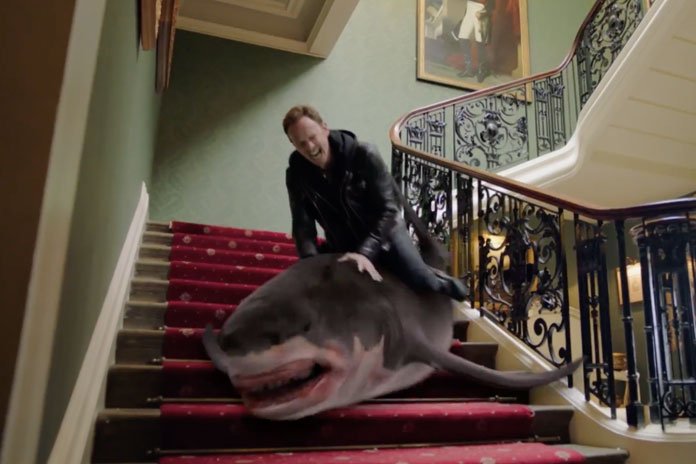 Bret Michaels shows up, and I’m honestly surprised its taken 5 movies to get him involved.  He rides on the front of a double decker bus playing his guitar, and he’s basically like the badass fire/guitar guy from Mad Max, but with herpes. 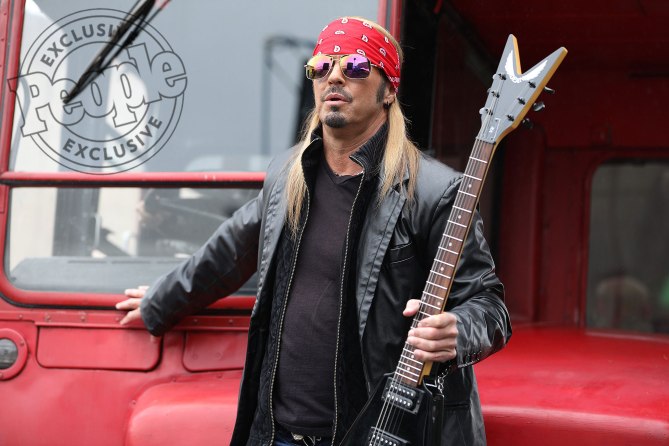 The fat loud lady from Dance Moms gets her dialogue cut off, and then her head follows suit.  Isn’t she in jail?  Did they let her out to film this scene?  That sounds like America.

Hey look – it’s Geraldo Rivera in a blimp!  I couldn’t find a picture of this online, so now I’m wondering if it actually happened, or if I was just writing down the things I wished would happen.

Now the gang is in Switzerland, and the sharks are swimming through the snow. Snow Sharks!  If SyFy hasn’t made that movie yet, shame on them. I think they’re looking for Gil? 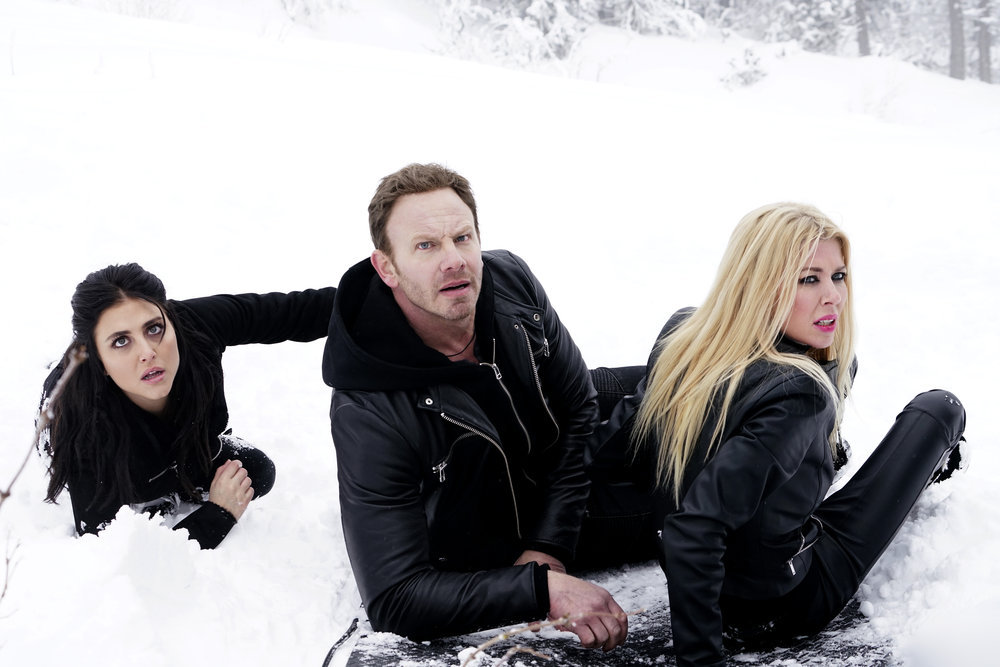 “I’m a lot of things, but I’m not a human helicopter!”  – This quote by April was very important to me, I wrote it down and starred it.  Do I think she actually *IS* a human helicopter, and there’s a vast government conspiracy covering it up?  Short answer – YES.

There’s a radical snowboarding montage set to an Offspring song, because the SyFy Channel knows their target audience is me.

They travel from Switzerland to Australia somehow, (HUMAN HELICOPTER, MAYBE?!?!) and when I started to complain about it, Paul yelled “It’s a vortex!!”.  Paul knows from vortexes.

There’s a secret society of shark researches or something called The Sisters composed entirely of women and led by Olivia Newton-John. 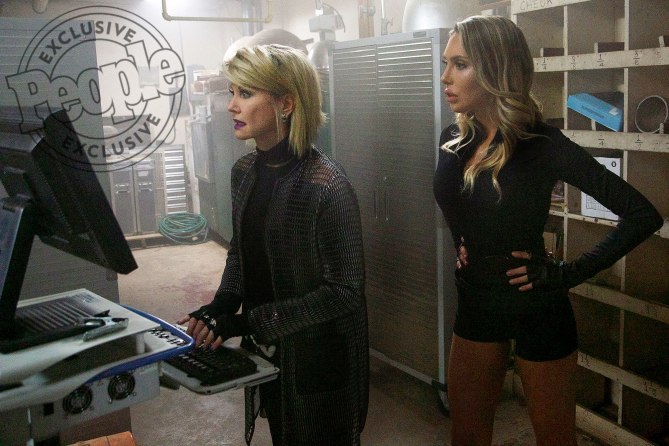 Sandra Dee looks terrified because she just caught a glimpse of the sentient sex doll behind her in the screen.

“It’s a Commodore 64, you idiots!!”  -Paul, finally finding something wrong with this movie an hour in.

April went off somewhere and got a bachelorette party makeover for no reason. 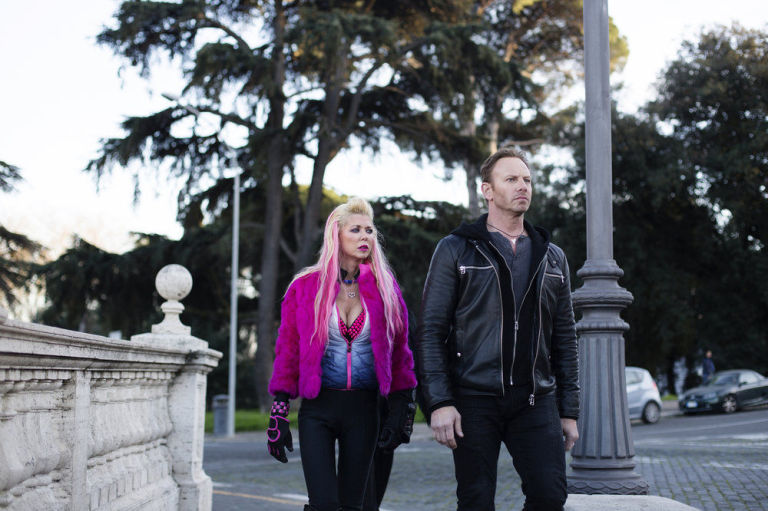 “THREE different guys hit on me in Vegas, you know. One of them was an entrepreneur! PAY ATTENTION TO ME!!!”

Tony Hawk skateboards up the side of the Sydney Opera House for some reason. You know, if they didn’t have to pay all these randos to be in the movie, they could’ve afforded to buy a shark and make Ian Ziering bare-knuckle box it.

Now they’re in Brazil and FINALLY A GUEST STAR I CARE ABOUT – It’s Tiffany “New York” Pollard, of Flavor of Love fame!!  And she’s doing an accent!!!!

Sidebar: Remember “Flavor of Love”?  That was my very favorite guilty pleasure show of all time.  Except I wasn’t very guilty about it – I told anyone with ears that it gave me life.  Flavor Flav, you’re a king among men!! 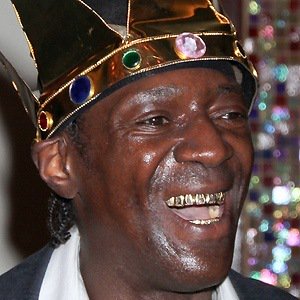 What time is it? Time for another dating show where a competitor poops on the stairs. TIME TO HEAL, AMERICA  *

The Sharknado picks up the Christ the Redeemer statue and drops it into the Colosseum in Rome, because sharks are atheists.  Guess who has a problem with that?  The Pope, FABIO. 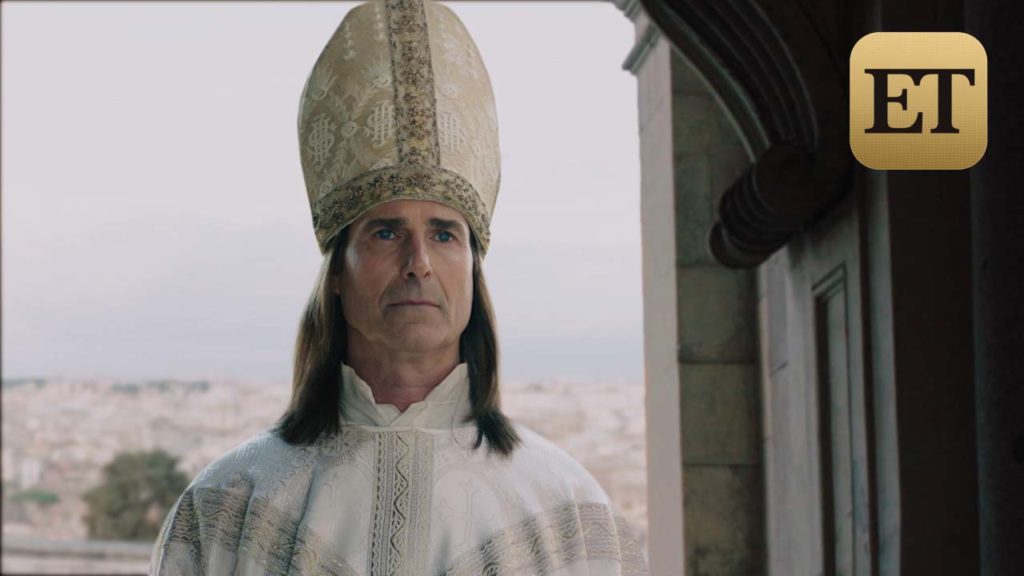 “God just told me that the 11th Commandment is NO GEESE NEAR ROLLER COASTERS.”

A sharknado knocks the Leaning Tower of Pisa straight, and then the action moves to Tokyo.  Nova dies, and my notes are getting harder to decipher.  For example:

Finn and April’s oldest son Matt – he of flight school and in-air wedding fame – dies while on the phone with his Dad.  According to my notes, I “laff and laff”.

“Let’s go back to Stonehenge!”
“You mean to turn back time?”
“I was gonna say for Spring Break, but OK!”

I have no idea if I made that joke, or if that was an actual piece of dialogue from the movie.  I also wrote:

Fin and April go to Egypt and find a Stargate that can bring everyone back to life. But then April explodes (I don’t KNOW why), leaving Fin holding her half-human / half-android head in his hands, wondering if he can get one more mouth party for old times’ sake. 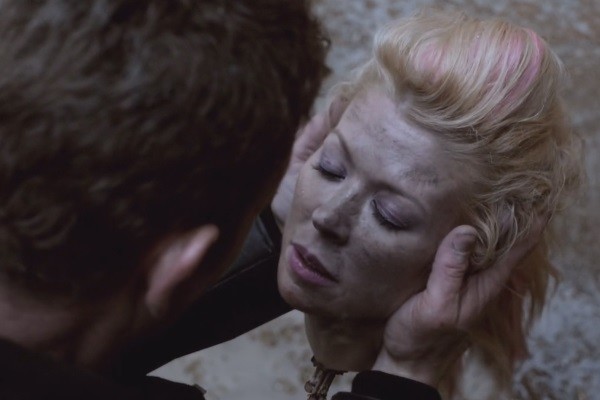 “The old ‘pretend to be asleep’ routine, huh? This shit is why we’re in therapy.”

We fast-forward many years in the future.  Or else Fin goes through the Stargate?  I guess that makes more sense (sense!) because Fin remains the same age but runs into grown-up future Gil, who has finally been dropped out of the Sharknado and is now Dolph Lundgren. 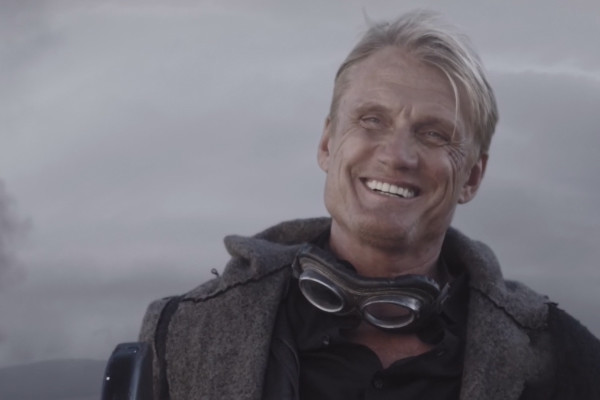 It took 32 years, but we finally got revenge on Drago for killing Apollo by making him be in a Sharknado. USA! USA! USA!

I think they cast Lundgren to explain away Gil’s weird accent in the beginning of the movie.  And that is the most thought that’s been put into this franchise ever.  EVER.

THE END.  I don’t know what the fuck happened in this movie, and I don’t think re-watching it would have helped. Can we all agree to stop this now?  No more Sharknadoes.  Let’s focus on more Arachnoquakes.  Tara Reid can get beheaded by a spider next. 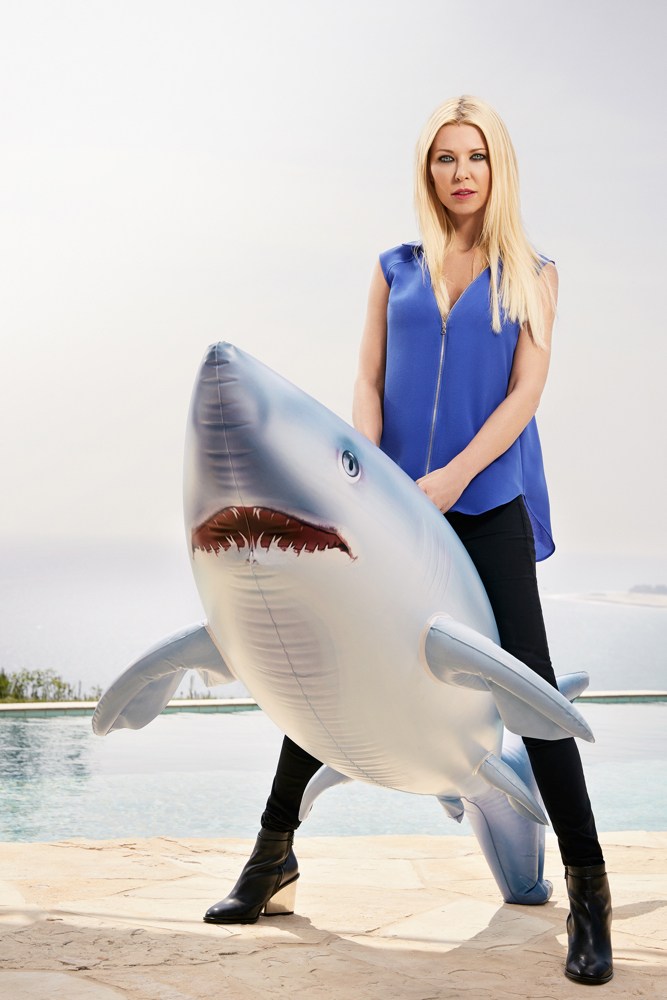 OK, its November, so stay tuned for reviews of treacly holiday movies!  Will Jennifer Love Hewitt find love on Christmas Eve, even though she’s a single mom struggling to open a diner of her own?!??!?!?!  I mean…probably.